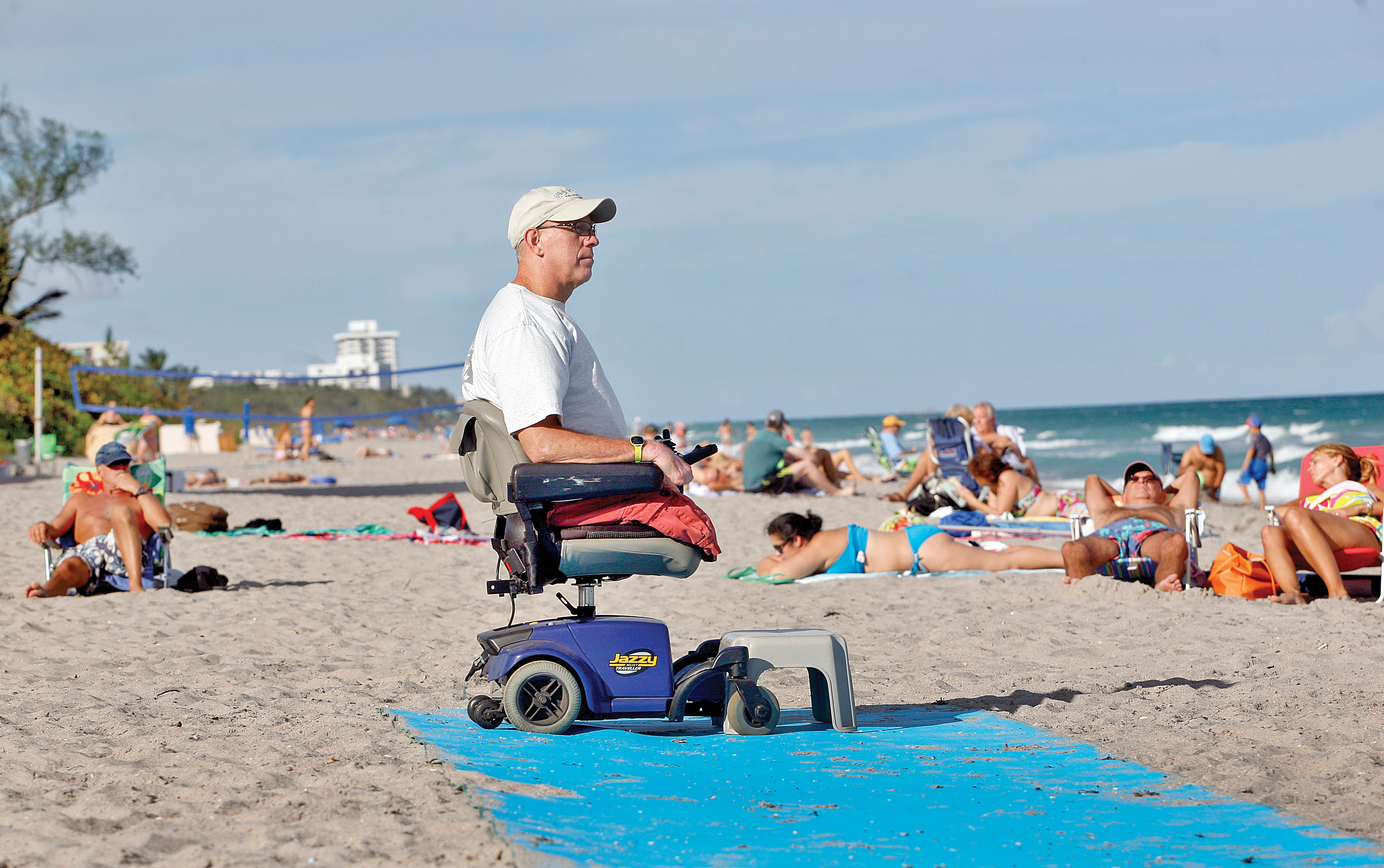 toward the water more navigable for people who come with wheelchairs, strollers or canes. Once the mats

reach the rack line on the beach, they form a T where users can stay to enjoy ocean views.

Ken Parker, who lost his legs to a serious kidney disease more than five years ago, paid a visit to South Beach Park in Boca Raton late in November.
“Wow,” he said as he rolled his wheelchair down recently installed beach access mats. “I haven’t been to the beach since before I lost my legs.” He even lowered himself from his wheelchair using a stool and sat in the sand. He wished he had remembered to bring a towel.
Parker, an advocate for disabled people who worked as an industrial designer, was trying out – at The Coastal Star’s request – the beach access mats that had been installed thanks to the Boca Raton Advisory Board for People with Disabilities.
The board pushed for nearly four years for the mats, according to board Chair Sandra Gottfried, which allow disabled people who use wheelchairs or walkers, moms pushing baby strollers and people pulling wheeled coolers to move over the sand easily. Even able-bodied beach goers walk on them.
Boca Raton is the first Palm Beach County city to have the beach access mats, installing them at South Beach Park and Spanish River Park on Nov. 1 – the end of turtle-nesting season.  The bright blue polyester AccessMats will be rolled up by March 1 for the start of the next nesting season.
For Parker, the mats provide beach access while still maintaining much-valued independence.
As a participant at a recent meeting on Delray Beach’s beach plan, Parker told commissioners that while he’s very mobile using his own wheelchair, he wouldn’t be able  to use a special sand wheelchair at the beach unless accompanied by someone strong.
“It makes a difference between being a disabled person and being independent vs. being a disabled person that is dependent on another person,” he explained at the November meeting.
Boca Raton’s $11,992 AccessMats are 5 feet wide and start at the top of the beach walkway. They go down the beach to the rack line, where seaweed accumulates, and form a T.
If the mats went closer to the ocean, they could get wet and become slippery. Because they’re used outside, they do not have to be slip resistant, said Michelle Cook, accessibility specialist at the National Center for Accessibility in Bloomington, Indiana.
When the mats are used on an incline, they can be slippery, users have reported to Cook. At the South Beach Park Pavilion where the mats are on an incline, their surface was slippery after a rain, Gottfried reported when she saw them after they were installed. “Even for able-bodied people the mats were dangerous to walk on,” she wrote in a Nov. 5 email to the city.
Boca Raton’s Recreation Services Department took her complaint seriously. It sent staff to check the anchor rods, relayed her concerns to the manufacturer and contacted other Florida cities that use the AccessMats brand. The cities gave positive reviews of the mats, Superintendent Greg Stevens wrote in reply.
The differences, according to staff, were related to the slope of the beach. At Spanish River Park, the mats sit on level ground. South Beach has an incline where staff will check the anchoring daily.
The staff also explained the city’s procurement process to Gottfried. The disabilities advisory board had recommended the Mobi-Mat brand, but the city bought AccessMats. Boca Raton rules do not allow a specific brand to be requested. The Recreation Services staff used the specifications of the Mobi-Mat brand in its request for bids, said Buddy Parks, deputy director.
“Several staff checked it, including engineers,” Parks said. “We checked with other cities and they said they loved it (AccessMats).” The two brands are extremely close in quality, said Cook of the Accessibility Center.
AccessRec, maker of AccessMats, gave the city a better price, a savings of nearly $2,400. The mats come with a 1-year warranty. If properly installed and maintained, they will last more than 5 years, said Seb Ragon, vice president at AccessRec.
Gottfried is satisfied that the city staff acted quickly to ensure the safety of all beach goers.
Mayor Susan Haynie said she has heard only positive things about the mats.
“The beaches are accessible to all,” she said. “The idea came from our disabilities advisory board and we listened to them.”