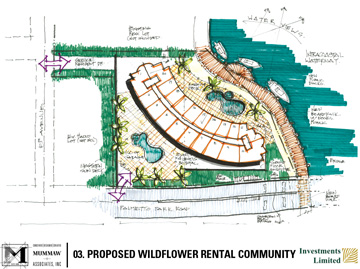 An artist’s rendering shows the proposed apartment building
and new boat dock space that could be built where the Wildflower
Resturant once stood at the base of the Palmetto Park Bridge.  Rendering provided

The city has plenty of restaurants but can never have too many rental apartments, developer James Batmasian told City Council members while presenting an unsolicited idea on what to do at the former Wildflower nightspot.

Batmasian and architect Doug Mummaw showed drawings of a five-story rental apartment house with below-grade parking and maybe a café and other retail on the ground floor. A boardwalk would sweep along the Intracoastal and provide a public area and dock space for boats. Batmasian said such a building could generate $300,000 a year for the city in lease payments.

The City Council held a special workshop in October and heard informal proposals from three stand-alone restaurants, two multi-story complexes, a recreation-oriented business and one resident who just earned an architecture degree. It has not asked for formal bids yet.

Lenore Wachtel, who lives on a canal off the Intracoastal, said her own unofficial survey showed 60 percent of the public wants a park of some sort at the Wildflower site, while 30 percent wants the city to sell the property “at a profit, of course.’’

“Only about 10 percent really want a restaurant there,’’ she said.

But Mayor Susan Whelchel said not everyone in Boca Raton lives on the Intracoastal.

“People like to go to the water and to a restaurant that is on the water,’’ Whelchel said.

The city bought the property for $7.5 million in 2009 after deciding the site on the northwest side of the Palmetto Park bridge has strategic importance to the downtown.

Council members want the property and the waterway area open to the public with amenities to attract the public to the site and a connection between the parcel and Silver Palm Park, on the south side of the bridge. They also asked that proposals include an attractive pedestrian orientation.           Ú