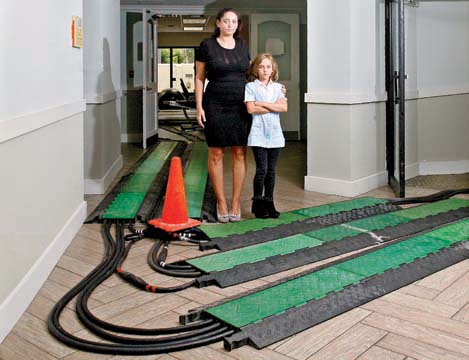 running through the lobby of the Villa Oceana.

More than 10 days after a fire at the Villa Oceana apartments in Boca Raton, one resident says permanent electricity had not been restored and occupants were living with unreliable generator power.
Firefighters responded to a call Sept. 18 at the apartments along A1A and quickly extinguished a fire in the electrical room that left 27 residents without power, according to Assistant Fire Chief Mike LaSalle.  Residents were evacuated that night and promised by the apartment management that they would be reimbursed for two nights in a hotel while the building was restored to a livable state, resident Emily Leander said.
The day of the fire, Leander and her 8-year-old daughter, Elle, were stuck in the elevator that serves the apartment building, she said, noting, “Two hours later, there was an electrical fire.”
Leander, who has lived at Villa Oceana for the last year, said she returned to the apartments when she was reassured that it was habitable.
“That Sunday we came back. There were no lights, no emergency lights, no working elevator,” she said.  “They said it was fine. They weren’t covering the hotel any more. There was no hot water. And I had to use a flashlight to get from floor to floor.”
Leander said that like her parents, who just moved to the apartments and live on the fifth floor, she is  nervous about staying there in the aftermath of the fire. Her building, the Lake View, was the only one of the apartments’ two buildings that was affected, she said.
She describes a scene as of Sept. 28 of wires snaking through the hallways, generator power that has gone out several times, and common areas without air conditioning that are becoming moist and moldy.
Management has said that power would be restored by Friday, Sept. 25, but now says it will be a week later, according to Leander.
Despite the inconveniences of generator power, Michael Dinorscio, Boca’s chief electrical inspector, said the building is “perfectly livable.” While the air conditioning in the corridors isn’t on, everything concerning life safety is working, he said.
Dinorscio said the Villa Oceana managed to get generator power up within 12 hours of the fire. Its work to restore normal power is “not a quick fix,” but the electricians are working on an expedited basis, he said, adding that his office was scheduled to check back on the site Sept. 30.  “They’re not going to get a break from our end.”
Villa Oceana’s property manager could not be reached for comment by The Coastal Star’s deadline.