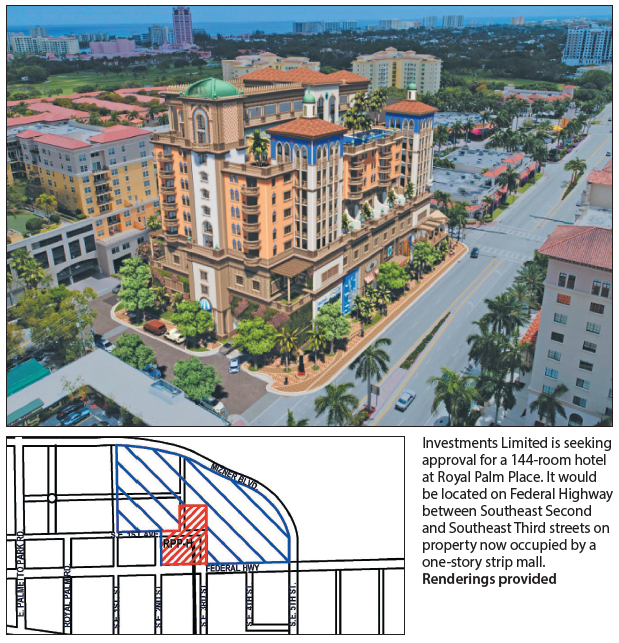 Investments Limited is moving forward with plans for an extended-stay hotel on a prime piece of downtown property in Royal Palm Place.
The largest commercial property owner in the downtown notified the city of its intentions in early 2019. Now, the nearly 2-acre project has begun to move through the city’s approval process, with members of the Community Appearance Board giving it a first look on Jan. 19.
Investments Limited, founded by James Batmasian and his wife, Marta, plans a luxury hotel with 144 guest suites, two featured restaurants and a fast-casual restaurant, and 1,443 square feet of retail space.
The hotel’s 401-space parking garage is intended to help resolve Royal Palm Place’s parking shortage.
Addressing the CAB, architect Doug Mummaw described the project as the “next dynamic, exciting phase of Royal Palm Place” that would include large walking paths, interactive art, sculptural features and a living green wall.
“We intend to create a landmark building,” he said.
The existing Garden of Humanity would be expanded and include large shade trees, water features and space for public exhibitions and special cultural events.
The hotel’s main entrance would be on Federal Highway at Southeast Third Street. The hotel would be located about midway between the 200-room Hyatt Place at 100 E. Palmetto Park Road and the 164-room Mandarin Oriental now under construction on Federal Highway just north of Camino Real.
The project would take up land now occupied by the Black Rose Irish Pub and 4th Generation Organic Market & Cafe.
Community Appearance Board members generally liked the plans, saying the building is “tastefully done” with “beautiful elements.”
“I think this would be a place we would love to go,” said board member Chris Capellini.
But as is usual in CAB project reviews, board members critiqued aspects of the building’s design, saying that it used too many precedents from Spanish, Italian and Moorish architecture.
If CAB members sounded critical, one board member said, it is because the project sits in such an important location.
“We look forward to resolving some of these concerns you have,” Mummaw said.
The board will review the project again in February.
While the coronavirus pandemic has reduced hotel occupancy, hotel companies are forging ahead to build new ones in South Florida in anticipation of the day when people will feel safe traveling again.
Hotels that opened in 2020 in Palm Beach County include the Residence Inn in Palm Beach Gardens and Canopy by Hilton, The Ben and Home2 Suites in West Palm Beach, according to the hotel development research company Lodging Development Group.
Six are under construction, including the Mandarin Orien-tal in Boca Raton, and two more are in the planning stages.