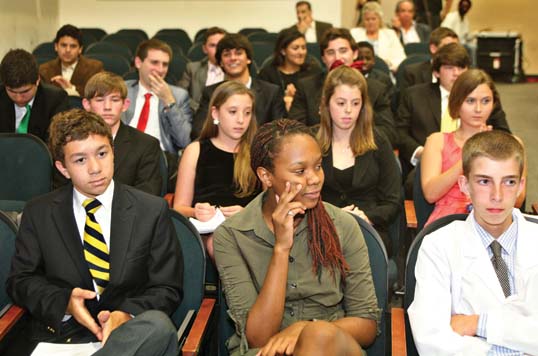 ABOVE: Fifteen entrepreneurs ages 12-18 wait their turn to present to the judges.

If you think kids today are lazy — holed up in their rooms, Googling cheat codes for video games, making new friends only on the Web — then you need to call up the good folks at the Boca Raton Chamber of Commerce and make arrangements to sit in on the Young Entrepreneur Academy.
Yeah, it’s called YEA for short.
These young people are going places.
“We have everything from nonprofits to a business that’s a fundraiser for schools,” says Beth Johnston, the chamber’s vice president of government and community affairs who helps run the program. “These kids are amazing.”
A hair bow business. A teen photography business. A young lady who sells hip lacrosse sports gear. (She started it after she couldn’t find anything cute already out there.)
In partnership with Florida Atlantic University’s Adam Center for Entrepreneurship, the chamber collects a small sampling of local inventors (who want investors), and then puts them to the real-life test.
It works like this: The program’s sponsors and mentors, many of them local business executives and entrepreneurs, select about two dozen students in grades 7-12 who have demonstrated what the program calls “creativity, innovative ideas, academic effort, determination, enthusiasm, the ability to communicate, and a commitment to the community.”
Then, with instructors helping them along, the students come up with their ideas, write a business plan, learn to pitch that plan, and eventually learn to make it happen and sell it to the community.
Competition is fierce.
Last month, 15 of the program’s top students appeared before a tough panel of judges at FAU’s Boca campus — each one of them trying to convince judges that their project deserved to be sent along to the University of Rochester for competition at the national level.
The Rochester competition is big because it’s a chance to present before some of the nation’s top CEOs.
“This is incredible real-world application,” says Sam Zietz, a Boca Raton resident who had a daughter in the program and who eight years ago created software for a point-of-sale small business system called ToucheSuite. (It can do everything from keep track of appointments in a hair salon to distribute marketing mailers.)
“These kids get it. They get it,” said Zietz, who says he “bleeds entrepreneurship.”
“They know what it’s like to stand up before a crowd and try to sell something.”
Like the young baseball player who got tired of pine tar all over his gear — his uniform, his bag, his hands, the fresh set of clothes in his gym bag — so he invented a nifty baseball glove (with a container) for pine-tarring his bat.
YEA member Julia Galang helped in the pitch for Bow Boutique, a business that makes and sells cute hair bows.
“It was nerve-wracking, to have all those people staring,” she said.
But she made it through, and she’s only 12 years old. After last month’s presentation, Bronsen Bloom  won judges’ hearts with his nonprofit, Musical Cares.
Bloom, a senior at Pine Crest School, collects new and used musical instruments for schools with underfunded music programs — which is pretty much public schools everywhere — then works on those school campuses to help create music programs. He started the program in Boca Raton about three years ago, and is takinng it national.
In Rochester at the end of April, Bloom ended up in the top nine and was the only not for profit to get to that point. His business was featured on a Rochester television station as he was giving instuments to students in a Rochester school.
The application for next year’s class is available at www.bocaratonchamber.com/yea.