The Addison Mizner room at the History Museum honors the architect whose designs set the tone for early development in Boca Raton. It includes original furniture from the Boca Resort. Photos by Tim Stepien/The Coastal Star

The newly renamed Schmidt Boca Raton History Museum will reopen to the public in Nov. 3 after a complete renovation of the nearly 100-year-old historic Town Hall building.
The $3.5 million project, initially paid for with reserve funds, donations and a $650,000 grant from the city, transforms the entire building and adds new interactive historical exhibits.
The renovation was bolstered in late September when longtime museum supporters Barbara and Dick Schmidt donated $1 million. Mary Csar, executive director of the Boca Raton Historical Society and Museum, described the donation as one of the largest in the museum’s history.
The building’s golden dome has been regilded and the exterior painted a creamy shade of white.
But the big changes are inside, where Csar gave a reporter and photographer a guided tour.
A timeline, dating from the pre-Columbian era to the 21st century, runs along the interior hallway. 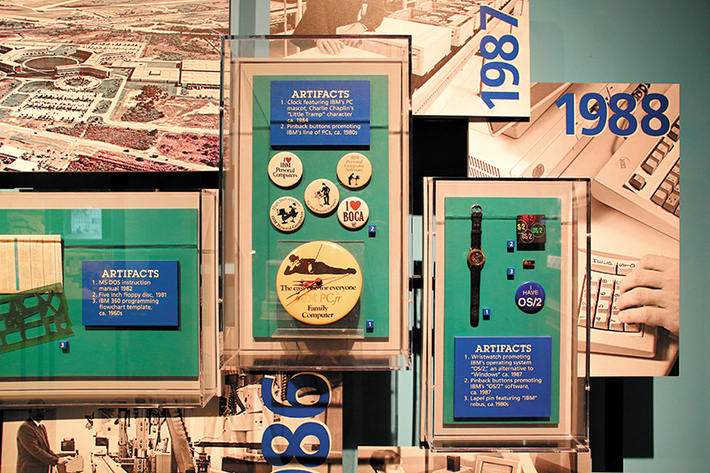 With more than 8,000 local employees at its peak, IBM changed the world when it unveiled the personal computer in 1987 from its Boca campus.

Among the events highlighted are the first settlers, the Yamato Colony, famed architect Addison Mizner’s Cloister Inn, the massive World War II Boca Raton Army-Air Base, Florida Atlantic University’s groundbreaking, IBM’s production of the first personal computer, construction of the Town Center mall and the 2001 anthrax attack on the AMI building.
Visitors may well find that there’s city history they never knew or had forgotten.
Does Boca Raton really mean “mouth of the rat”? The answer is yes, but there’s more to know about how that name was affixed to the city.
Rooms off the hallway are devoted to specific subjects.
The Addison Mizner room includes original furniture from the resort that is now rebranded as The Boca Raton and a model of a castle Mizner intended to build on a now-gone island in Lake Boca but never did.
The IBM room underscores the company’s impact locally and across the world. Retired IBM employees donated original PCs to the museum. A recording of a former employee recounts the absolute secrecy under which the company operated.
The World War II room showcases a B-17 in a dogfight and includes the history of radar and U-boats.
The largest room is the former City Council chamber, which now will house changing exhibits and a lecture hall.
The Town Hall building at 71 N. Federal Highway doubles as the city’s visitor center and has a gift shop.
The building renovation became very complicated, delaying the completion many months. The coronavirus pandemic also created difficulties, making it hard to get enough workers and causing supply chain disruptions.
Plumbers found that the building’s cast iron pipes had disintegrated, causing leaks that probably had existed for years and undermined the foundation, which had to be shored up, said architect Derek Vander Ploeg, who volunteered his services to the project.
“We are lucky we caught it,” he said.
FPL discovered the building had an undersized transformer, which explained various electrical glitches plaguing the building. It was replaced.
All this increased the project’s cost, prompting Csar to ask the City Council on July 29 to make an additional $590,000 grant. The city is the Town Hall’s landlord.
Council members were enthusiastic about the building’s transformation.
“We are excited to see this open,” said Mayor Scott Singer.
“These exhibits are amazingly exciting,” said Deputy Mayor Andrea O’Rourke.
But they were noncommittal about providing additional funding. Singer could not recall a time when a nonprofit completed a huge project, paid all the costs and then came to the council for money.
Both Csar and Vander Ploeg said city staff was aware of what work was being done, and why, every step of the way. Both said the project contractor used a competitive bidding process.
The City Council resumed discussion on the request on Sept. 13.
The building’s problems were serious and “could not be ignored,” Csar said. “This was not done without anybody’s knowledge. And it had to be done fast.”
Deputy City Manager Mike Woika said some city staffers were aware of the problems, but no one advised historical society officials on what they should do or how to pay for it.
After briefly considering negotiating a compromise, council members agreed to provide the requested amount.
“We need to give them the money they spent on necessary repairs,” said council member Andy Thomson.

On display in October
What: The Boca Raton Historical Society and Museum’s traveling “HERstory” exhibit runs through Oct. 30.
Where: Boca Raton Community Center, 150 Crawford Boulevard.
Highlights: The exhibit features Boca Raton’s first female pioneers, who came to farm South Florida at the turn of the 20th century. Many were from northern middle-class families, accustomed to electricity, indoor plumbing, markets and department stores.
Hours: 9 a.m. to 8 p.m. Monday through Friday and 9 to 4 Saturday.
Info: 561-395-6766 or www.BocaHistory.org.