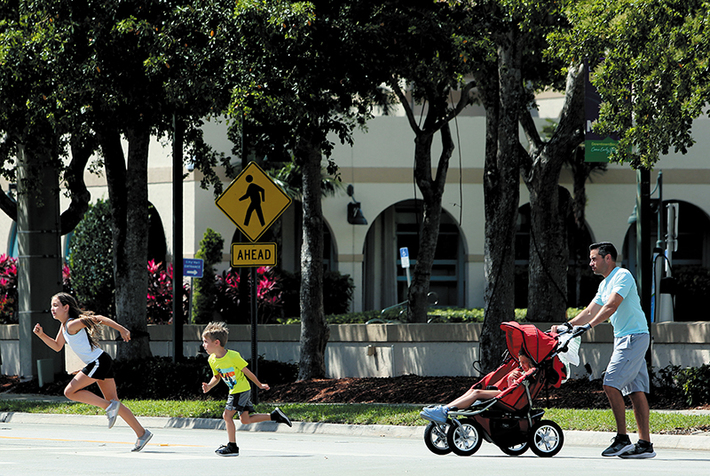 City Council member Andy Thomson jogs with his children Allie, 9, Henry, 5, and Maddie, 7, along Boca Raton Boulevard. The kids and other community members often come along to help spot and pick up trash. Photos by Tim Stepien/The Coastal Star

Council member’s push to run, pick up litter on every mile of street gathers public support

When City Council member Andy Thomson launched 2020 with a New Year’s resolution to jog more frequently, he noticed litter everywhere along the streets.
Water bottles, plastic straws, candy wrappers, and later on, face masks and disposable gloves.
“It really bugged me,” he said. “Once you see the trash, you can’t not see it.”
That spurred Thomson to bring a bag with him so he could pick it up as he ran.
But as so often happens with New Year’s resolutions, his jogging sessions dwindled over time. He needed to impose some discipline.
That led to another resolution: In 2021, he would jog every street in the city — all 475 miles — and pick up trash along the way.
“This gave me the discipline to make it happen,” said Thomson, who now typically jogs 3 to 4 miles four days a week.
He charts his progress on his “Run the City” website, www.andythomson.com/run-the-city/, where people can volunteer to join the effort, and on Facebook.
As of March 23, he had run 100.5 miles and picked up 260 pounds of trash, including 308 pieces of personal protective equipment.
The discarded masks and gloves bother him the most. Thomson says he finds about three along every mile he runs.
He’d like to think they are dropped accidentally, but has doubts. He wears gloves so he can retrieve them safely.
“This is one of the things we need to be better at,” he said of properly disposing of masks and gloves.
So far, Thomson has run many of the city’s main arteries, including Glades Road, Camino Real, Palmetto Park Road and Dixie and Federal highways. Andy Thomson, with children Henry and Maddie, says his effort to pick up trash has expanded into spotting other problems such as potholes and listening to the concerns of residents he encounters. Photos by Tim Stepien/The Coastal Star

Later this year, when he hopes the coronavirus pandemic is under better control and more people are vaccinated, he will venture onto neighborhood streets.
When he does, he wants to hold “mobile office hours,” talking to residents he meets about the issues they face.
In the meantime, his project has undergone mission creep. He has spotted pot holes, broken sidewalks and crosswalks ill-suited to pedestrians or cyclists.
He takes photos of the problem spots and sends them to whatever agency — city, county, state or federal — is responsible for fixing them.
“We are starting to see some of the issues I have identified get fixed,” he said.
His efforts are not always solitary. He often is helped by some of his five children.
During an early March run, daughter Maddie, 7, and son Henry, 5, worked as trash spotters, sometimes running alongside their dad, and sometimes pushed along in a large stroller.
Both had eagle eyes. Maddie pointed out small, clear bottle caps in the grass along North Ocean Boulevard that a reporter had not noticed.
As word about “Run the City” has spread, volunteers are stepping forward.
Thomson was joined on Feb. 27 by about 50 Christ Fellowship parishioners in cleaning up the Palm Beach Farms and Camino Lakes neighborhoods.
Christ Fellowship’s Boca Raton Community Pastor Rob Elliott heard about Thomson’s efforts, which dovetailed with the church’s emphasis on community service, and offered to help.
Volunteers from the church arrived at a meeting point equipped with buckets and trash bags and fanned out in small groups. They covered 16 miles of streets and collected 80 pounds of trash, Thomson said.
“It would have taken longer to do if it had been a smaller group,” Elliott said. “Collectively, we came together to have an increased impact.”
Since then, the children who joined in have talked about what they did, he said.
“It definitely had an impact on people, especially the kids who were involved,” Elliott said. “It raised awareness of the need for it.”
In another sign that his efforts are noticed, Thomson said a teacher told her students about what he is doing, and now some of the kids are doing similar work on their own.
“That is how communities get better,” Thomson said. “Not by lecturing. Not by complaining, but by doing.”
He also decided to send a message that people should not litter masks and gloves. Discarded face masks and gloves bother Thomson most, and the council instituted a $250 fine to try to curb that litter.

Thomson introduced an ordinance on Feb. 23 that increases the city’s normal littering fine from $50 to $250 for improper disposal of PPE.
The city set a precedent for a larger fine when it previously increased to $100 the fine for littering in storm drains, canals and lakes.
“Littering masks is simply not acceptable and Boca is better than that,” Thomson said when the ordinance came up for a vote March 23.
Other council members embraced the idea, approving the ordinance unanimously.
“I think it is a great idea,” said council member Monica Mayotte. “I consider it out of control.”
“I see the masks everywhere too,” said Deputy Mayor Andrea O’Rourke. “It is upsetting.”
Gov. Ron DeSantis on March 10 wiped out fines imposed on people or businesses for violating COVID-19-related ordinances, but his order will not affect Boca Raton’s new ordinance. That’s because it does not stem from the city’s use of emergency powers and the city already had established fines for littering, said City Attorney Diana Grub Frieser.
Thomson and other council members recognize the ordinance will be difficult to enforce since a fine can be imposed only if the infraction is witnessed by police or code enforcement officers.
Even so, the ordinance is an opportunity to prod residents to take the proper disposal of masks and gloves seriously.
“I want to use this as an opportunity to educate,” said Mayor Scott Singer. Thomson picked up 7.54 pounds of trash on a recent Saturday as Henry, Maddie and Allie kept their eyes to the ground. On another day a church group joined in and they collected 80 pounds.