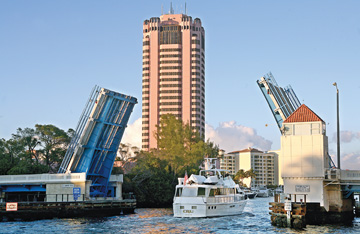 Plans to replace the 1939 Camino Real Bridge were thwarted
after engineers discovered the structure is protected as a historic
treasure. Photo by Tim Stepien

Plans to replace the Camino Real Bridge have been canceled after county engineers discovered the bridge is protected as a historic treasure.
State inspections have repeatedly rated the drawbridge built in 1939 as structurally deficient. County engineers were ready to tear it down and build a new $43.8 million bridge.
“A new bridge was the preferred alternative but then this historical issue popped up,” said Omelio Fernandez, the county’s director of roadway production.
County engineers didn’t know that county commissioners in 1997 had established the Camino Real Road and Bridge Historic District, protecting the bridge they wanted to tear down.
“The problem at this point is that we cannot justify replacement because of the bridge’s historical status,” Fernandez said. “We would not be permitted to do it.”
Camino Real from the east side of the bridge to Dixie Highway is eligible to be listed on the National Registry of Historic Places because of the county’s historic designation.
The wide street designed by Addison Mizner in 1925 is significant to understanding Boca Raton’s history.
Unlike most communities with humble beginnings, Boca Raton was born from Mizner’s grand conceptual plan for “the world’s most architecturally beautiful playground.”
“This was a very radical idea in the 1920s,” county preservation officer Chris Carpenter said. “Mizner’s grand vision for Boca Raton was our county’s first planned community.”
Winter guests would arrive at Henry Flagler’s railroad depot and be escorted down Camino Real (the royal highway) to what today is the Boca Raton Resort and Club.
“This is our historical corridor,” Boca Raton Historical Society executive director Mary Csar said. “If you want to know how Boca Raton came to be, you go down this corridor to figure it out.” 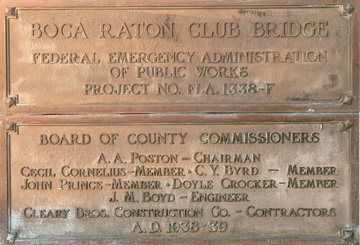 The Camino Real Bridge, built in 1939, was the first
permanent bridge built over the Intracoastal
Waterway in that spot.

Mizner envisioned a grand canal down the center of the 160-foot-wide Camino Real. So hotel guests could get to the ocean, he also designed an elaborate Venetian drawbridge with a tower apartment for the bridgekeeper.
But neither the canal nor the bridge was built before Mizner went bankrupt in 1927.
Boca Raton’s next developer, Clarence Geist, put a temporary swing bridge over the Intracoastal Waterway in 1929.
The permanent drawbridge constructed by the Public Works Administration in 1939 was nothing fancy.
County commissioners voted to replace it with a raised four-lane bridge in 1974, but backed off when Boca Raton argued that the new bridge would create more traffic.

The county hired a consultant in 2006 to investigate the bridge’s condition when it began to repeatedly fail state inspections.

“The existing bridge barrier and railing are substandard and do not comply with current standards for crash testing,” the consultant wrote. “The curb is high and considered dangerous because it has the potential to launch vehicles over the barrier.”
The consultant said a new drawbridge would cost $43.8 million compared to $17.3 million to build a high-level fixed bridge, and that a tunnel would cost $384 million.
Bridge experts say the maximum life span for any bridge is 75 years.
But now, because of the 73-year-old Camino Real Bridge’s historical status, the only way to replace it would be to prove that is unsafe.
“It’s not in such bad shape that we could justify replacing it for safety reasons,” Fernandez said.
The U.S. Coast Guard notified county engineers when it discovered the historical status while routinely reviewing the county’s proposal to build a new bridge, Fernandez said.
The cost to rehabilitate the Camino Real Bridge for its 75th birthday is estimated to be $7.2 million.                             Ú