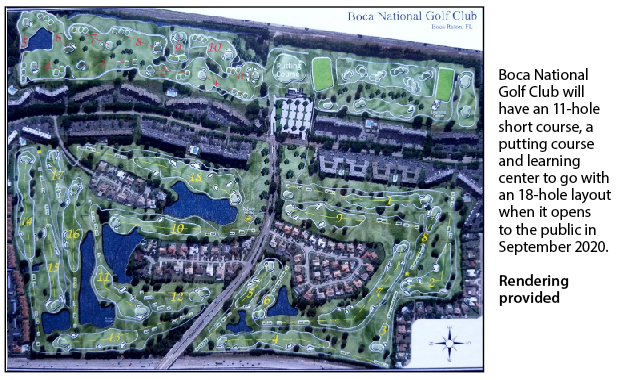 The new Boca National Golf Club will cost taxpayers a whopping $27.6 million to build, on top of the $24 million being paid for the land.

The construction price, which Greater Boca Raton Beach & Park District commissioners voted Feb. 25 to send along to the City Council, dwarfs an early estimate of $10.5 million just to move earth and plant grass to create the course.

That estimate stands; the bulk of the extra costs are a $3.5 million clubhouse, $2.8 million maintenance facility, $2.5 million tunnel and $2.3 million for maintenance equipment. Then add $1.5 million for lights at a driving range and short course; a $925,000 teaching facility, and $768,000 for on-course restrooms.

Beach and park commissioners want to schedule a joint meeting with the council in March to discuss how to finance the project. They will borrow money on their own if they must, but would prefer getting a lower interest rate through the city’s AAA bond rating — and would happily agree if the council offered to split the cost.

Arthur Koski, the district’s former legal counsel and executive director, who is spearheading the project, said the final cost could have been double the current estimate.

“We had an estimate from an architect for a 12,000-square-foot clubhouse. It was $30 million. Somebody [in the audience] said, ‘What?!’ That was my response too. I said there’s no way that’s going to happen,” Koski told beach and park commissioners at their Feb. 12 meeting.

Koski said the district will spend a little more than a tenth of that amount by using modular components instead of building the clubhouse from scratch.

“It will look similar in nature to the front of the clubhouse at the Old Course at Broken Sound,” Koski said. “You can’t tell the difference between stick-built and modular.”

The new tunnel will let golfers avoid traffic on Northwest Second Avenue as they drive carts from the clubhouse to the first tee. There is already a tunnel under Jeffrey Street connecting what will be the front nine holes to the back nine.

The clubhouse and learning center are envisioned as being built — and paid for — after the course opens to the public in September 2020.

The district is counting on greens fees and other revenue from the course to help pay for its purchase and construction.

“We’re trying to make this playable, affordable and produce as many rounds as possible,” Koski said.

The Price/Fazio design team hopes to get building permits approved by the end of June with construction starting in mid-July. In a Feb. 18 report to the district, the designers said cost estimates for the training facility and restrooms were based on normal concrete block or steel structures, but that those structures might be modular like the clubhouse.

“We will be refining the buildings in the coming weeks and at that time costs will be revised as well,” they wrote.

The city is selling its municipal golf course west of the Florida’s Turnpike to developer GL Homes for $65 million but has extended the date for closing the deal six times, most recently on Feb. 26 to make the transaction “not later than” Oct. 31.

Larry Portnoy, a GL Homes vice president, told beach and park commissioners Feb. 12 his company could easily wait until after Boca National opens in 2020 to complete the deal with the city. Ú