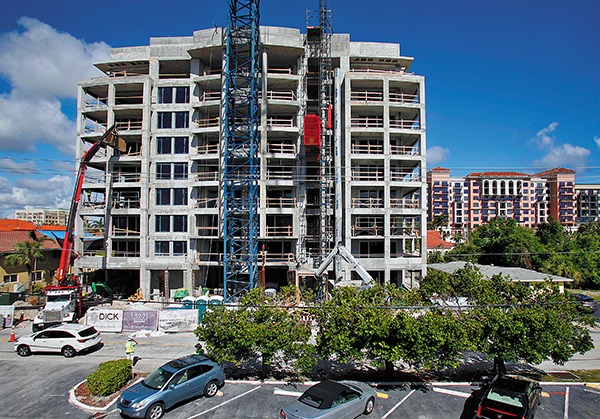 327 Royal Palm, a 100-foot-tall, 24-unit condo just south of East Palmetto Park Road, is among the smallest of the new buildings. Only about 17 percent of space available for downtown development remains. Tim Stepien/The Coastal Star 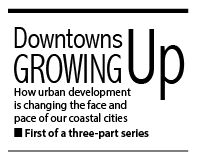 When the fierce battle over the Mizner 200 luxury condominium ended in August, it was almost possible to hear downtown residents and people opposed to development breathe a sigh of relief.
The 384-unit project became a flashpoint for many people upset by what they saw as aggressive developers pushing too many big buildings that were bringing more traffic and changing the character of the city.
So the ultimately amicable resolution of the Mizner 200 fight — with downtown activists winning concessions on the project’s design and landscaping — felt like a coda to downtown redevelopment.
But it’s not over yet, and that concerns downtown activists like James Hendrey, who sees even more density in the city’s future.
He points to the proposed redevelopment of Royal Palm Place. Plans call for nearly 300 luxury rental units, retail and restaurants, and that’s before the landowner has unveiled plans for the remainder of the large property.
“Are the roads any wider? No.” Hendrey said.
His concerns include the need for new infrastructure, more open space and making downtown more walkable.
What he’d love to hear city officials say to developers: “Until you do the infrastructure, we don’t even want you to come before us with a project.”
The city started with 8 million square feet available for downtown development, but as of the end of last year, 1.4 million square feet, or about 17 percent, remained available for development. The city won’t update that number until next year, but officials predict the remainder will be exhausted within a few years. 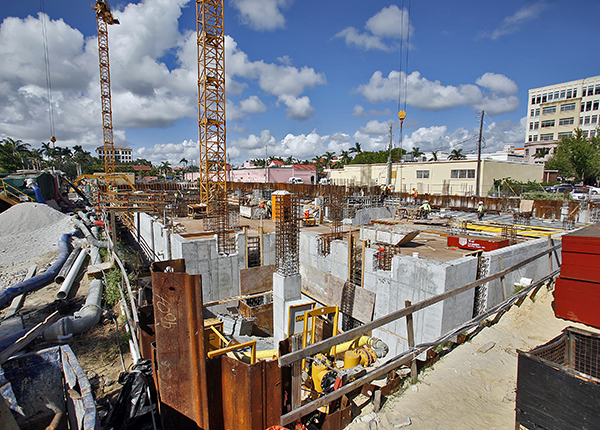 Tower 155 on East Boca Raton Road is designed to reach the 140-foot height limit for that area. The building will hold luxury condos, shops and restaurants. Tim Stepien/The Coastal Star

Rising from the ground now are 170-unit Tower 155 luxury condo at 199 E. Boca Raton Road and the 24-unit 327 Royal Palm luxury condo at 327 E. Royal Palm Road.
Two other projects join Mizner 200, located on nearly 9 acres along Southeast Mizner Boulevard, as approved but not yet built.
While the first phase of Via Mizner, 366 apartments at Camino Real and Federal Highway, is finished, two other phases are coming. Boca Raton-based Penn-Florida companies will now build a 164-room Mandarin Oriental hotel, 85 condos in The Residences at Mandarin Oriental and 41,706 square feet of shops and restaurants.
375 Royal Palm, the first assisted-living facility to be built in eastern Boca Raton, will have 193 luxury units at 375 E. Royal Palm Road.

But wait, there’s more
Additional proposals are seeking city approvals.
Camino Square, just north of West Camino Real and west of Dixie Highway, would replace a dilapidated shopping center where a now-shuttered Winn-Dixie sits.
The project would include two eight-story buildings with 350 luxury apartments, as well as two parking garages with 631 spaces and a public dog park. The buildings would rise 77 feet, well below the 100-foot limit permitted in that part of downtown.
It is being developed by FCI Residential Corp., a subsidiary of sugar producer Florida Crystals Corp.
475 Royal Palm is proposed by Boca-based Group P6, the same developer behind 327 Royal Palm. It would include three buildings at nine stories with 48 luxury condos.
The number of condos could decrease if buyers elect to combine units. Rising to 100 feet, the buildings will comply with city height limits.
The project also would include 217 spaces in underground parking to service the condos and a nearby Morgan Stanley office building.
Group P6 has proposed yet another project, the second one downtown focusing on retirees.
Concierge, at 22 SE Sixth St., west of Federal Highway, would have 110 units, of which 20 would be for memory care, 44 for assisted living and 46 for independent living. The 127 parking spaces would be underground and the project, at nine stories, is within the city’s height limits.
Concierge differentiates itself from 375 Royal Palm by having independent living. But like 375 Royal Palm, it will have deluxe amenities such as restaurants, a spa and salon, Zen garden and concierge services. It touts its location near restaurants, shopping and cultural venues.
Investments Limited, owned by James Batmasian, is the city’s largest owner of commercial properties downtown. The company has plans for two portions of the 14-acre Royal Palm Place that would dramatically change the look of the longtime shopping and dining destination.
Investments Limited has proposed two buildings. One would include 69 luxury rental units, 11,156 square feet of retail and restaurants and parking for 301 cars. The second would have 220 luxury rentals, 4,560 square feet of retail and restaurants and parking for 500 cars.
The redevelopment plans are aimed at transforming Royal Palm Place, built in 1966, into an urban center that meets demands of retail and restaurant tenants, while including landscaped outdoor areas that can host special events.

City plans uncertain
Meanwhile, the city is thinking about how to create a downtown government campus on the nearly 30 city-owned acres around City Hall.
What will be included is still a work in progress, but one possibility is building a performing arts center.
City residents have been asked for their input, and City Council members are expected to start making decisions soon.
The Related Group, South Florida’s largest luxury condo developer also known for its large mixed-use projects, approached the city in July with the offer of a swap. It would build a 1,500-seat indoor performing arts center and adjacent parking garage in the campus, in return for 3.6 city-owned acres in Mizner Park, where the developer would tear down the aging outdoor amphitheater and build as many as 400 residential units, retail space and a parking garage that the public could use.
City officials have not closed the door to some sort of eventual deal although they want to keep the amphitheater in Mizner Park. At the Nov. 27 Community Redevelopment Agency meeting, council members said they will consider a redesign of the building or the addition of a retractable roof.
The downtown has transformed dramatically over the past four years, with the addition of the 261-unit Camden Boca Raton rentals, the mixed-use Mark at CityScape, the 200-room Hyatt Place, the 378-unit Palmetto Promenade rentals and townhomes, the 229-unit Boca City Walk rentals and the Via Mizner rentals.
That is exactly what city officials intended in 1982, when they created a redevelopment plan to breathe life into a moribund downtown. Through a resolution and ordinances, they established conditions for downtown development that allowed the 8 million square feet of construction.
In 1989, the city partnered with Crocker & Company to acquire and develop the former Boca Mall site, and Mizner Park opened in 1991 as the first project to launch a revitalized downtown.

Building pace likely to slow
But officials expect the pace of development to slow, and it is doubtful other large-scale projects such as Mizner 200 will be built unless the city changes its rules.
“I can already see the slowing of it somewhat,” said architect Derek Vander Ploeg. “The development community says the low-hanging fruit has been picked.”
He can envision the construction of one or two more hotels, some office space, and a limited number of condos and rental units.
Keith O’Donnell, a principal with the commercial real estate firm Avison Young, expects to see some smaller boutique projects until all the 8 million square feet is gone.
“I think it is highly unlikely there would be a big push beyond what we already have because that is what people voted for,” he said, referring to an ordinance approved in 1993 that incorporated the 8 million-square-foot limit. “I haven’t heard anyone talk of expanding the 8 million square feet.”
Ignacio Diaz, co-owner and director of developer Group P6, agrees that the downtown’s growth spurt is nearing its end.
“I do think development is going to slow down in downtown Boca,” he said. “There is enough capacity being created. There are not that many development rights left.”

Midtown area may be next
Diaz sees large-scale development moving elsewhere, and points to the Midtown project proposed by Crocker Partners on 300 acres between Interstate 95 and the Town Center at Boca Raton.
Midtown is envisioned as a “live, work, play” area, with 2,500 residential units in a transit-oriented development where people will live and walk or take shuttles to their jobs in the area, shopping and restaurants. It has run into opposition by city officials, but negotiations are ongoing.
“The next big thing to happen in the city is Midtown,” Diaz said. “It has huge development potential. It is vastly underdeveloped.”