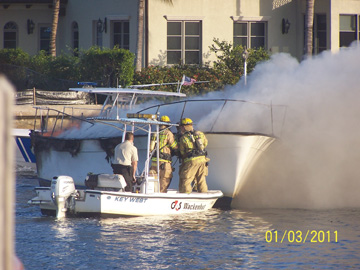 Firefighters extinguish a blaze on a boat at Delray Harbor Club Marina. One man died in the fire. Photo courtesy of Delray Beach Fire-Rescue

The 32-foot cabin cruiser, The Quarterdeck, had finished refueling at the Delray Harbor Club Marina on the Monday right after the new year began, but the strong smell of gasoline still lingered in the air.
Fuel had apparently spilled into the water, according to state investigators, and a dock attendant quickly put a containment plan into action.
Just a few minutes later, all hell broke lose as The Quarterdeck exploded, erupting into flames.
Two of three men onboard made it into the water and were later taken to a local hospital.
A third person, 67-year-old Robert Romanelli of Orange Park — apparently trapped below deck — never made it out. Investigators later found his body in the boat’s charred debris.
The fatal boat fire is still under investigation by the Florida Fish and Wildlife Conservation Commission and the state Fire Marshal’s Office and the exact cause of the explosion is still unknown. What is certain, and what the incident underscores, is that in Florida boat fires are a constant threat.
In 2009, the last year in which data is available, the state Fire Marshal reported 229 boat or other water-vehicle fires, responsible for $7.7 million in lost property. Although none of those fires involved a fatality, 14 people did suffer injuries, according to state records.
While the leading cause of boat fires is equipment failure, according to the state Fire Marshal’s Office, it is the combination of gasoline fumes and electrical equipment on board a boat that should be a major concern for all who enjoy boating.
On boats, it’s possible for gasoline spilled during fueling to find its way to the bilge, the area below the deck that is similar to a crawl space under a house.
Because there is little ventilation in the bilge, fumes can build up and become a serious threat to safety.
“All it takes is one spark, one little spark, and a boat can go up like a Roman candle,” says Delray Beach Mayor Woodie McDuffie, a veteran boater.
According to the state Fire Marshal’s Office, one of the best ways to prevent explosions is to avoid spilling fuel or overfilling a tank. A funnel is often helpful in avoiding a spill should a sudden wave tip the boat.
To be on the safe side, fire officials recommend letting your engines cool before fueling and turning off all electrical systems while at the pump.
Ventilation is also important and fire officials say it’s imperative for boaters to run blowers to clear out any fumes in the bilge and to also check for any gas fumes before starting engines or electrical systems.
Here are some other fire-safety tips for boaters from the state Fire Marshal’s Office:
• Keep your boat in good repair and be on the lookout for leaky fuel lines and frayed wires.
• Do not use portable electric or propane heaters onboard.
• Keep aisles clear and store fuel-powered equipment in a separate storage area that is well-ventilated.
• Make sure batteries are properly installed and not damaged.
• Be sure to have a fire extinguisher onboard. A multi-purpose ABC fire extinguisher is the preferred option.
• Make sure you have a way to communicate in an emergency available at all times.
Boaters who want to learn more about fire safety aboard boats can take advantage of safe boating courses offered by the U.S. Coast Guard Auxiliary.
Classes are offered at the Boynton Beach Boat Club Park on the last Saturday of every month.
There is a $36 fee for the classes, which start at 8:15 a.m. and continue until 3:30 p.m. with a break for lunch.
To find out more, call Jerry Schnue at (561) 966-2158 or contact him at capthook21@msn.com.