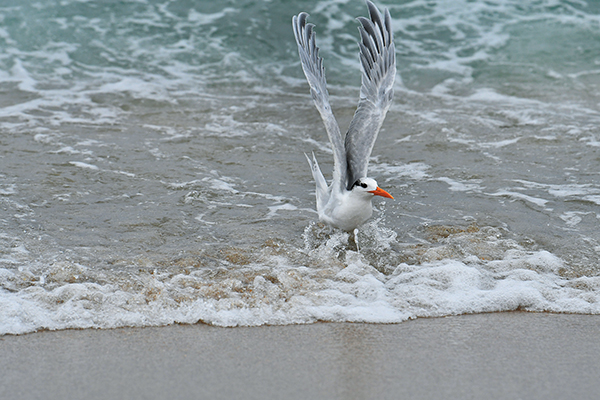 A Forster's tern takes a bath in the surf. Jerry Lower/The Coastal Star

It was literally a day for the birds.

The morning was cold, windy and blanketed in fog, challenging teams of bird-watchers engaged in the National Audubon Society’s annual Christmas Bird Count.

“It was a weird weather day,” says Chuck Weber, a local television journalist who coordinates the bird count within a 15-mile radius centered near the intersection of Jog and Hypoluxo roads. “There were certain species that didn’t pop up on count day, although some may have been active later in the day.”

Despite the weather, what Weber and the 80 counters in his circle found during a day's work was fairly good news for birds — as well as for the people who like having them around.

In all, the 20 teams identified about 143 species during the latest count, just one fewer than in the previous year. They spotted 17,425 individual birds, an estimate at best — about 500 more than were counted the year before.

The stability in the number of species is comforting, considering a variety of variables — especially the loss of habitat — is problematic for some birds.

For instance, a pasture near Wellington, where eastern meadowlarks had been spotted during previous counts, is a residential development this year.

“We didn’t get any eastern meadowlarks this time,” Weber said.

The upside is that many developments are attracting other species, in large part because of open green areas, trees and shrubs that offer habitat for different avian groups.

“Meadowlarks may be gone, but maybe phoebes and shrikes will be moving in,” Weber said.

Some years ago as many as 160 species were counted in the area that Weber’s team covers during the annual census. Then, 10 to 15 years ago, that number was down to the mid-to-high 130s.

The rebound now, Weber says, is partly because of restoration efforts led by Palm Beach County, including work in the Lake Worth Lagoon that has created 11 acres of mangroves and two acres of oyster reefs.

With the restoration has come the return of oystercatchers and other species, he said.

Other county projects, including the development of Wakodahatchee Wetlands and Green Cay Wetlands, both west of Boynton Beach, have also attracted a variety of birds.

“If we didn’t have those areas our count would probably be down,” Weber said. 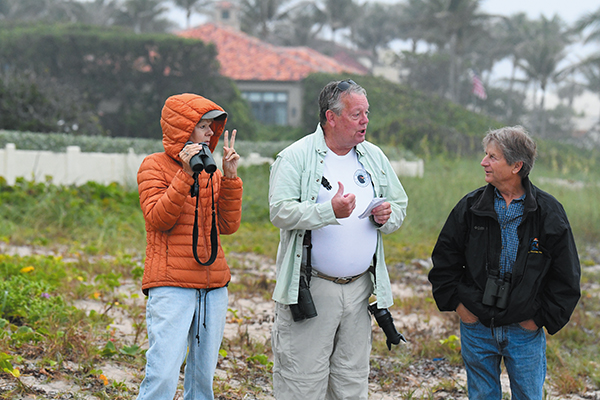 Along coastal Palm Beach County, from Delray Beach to Sloan’s Curve in Palm Beach, the Dec. 30 bird count included many of the expected groups as well as a few surprises such as the number of sandwich terns and the presence of frigate birds despite the fog.

Observers, many with binoculars and some with cameras, made their way across golf courses, beaches and natural areas and saw common birds such as royal terns and laughing gulls.

Veteran birder Rick Schofield’s five-person team spotted 53 species along the barrier island from Delray Beach to the Boynton Inlet, down from 56 the previous year. The number of birds counted, however, increased from about 1,500 to about 1,600. The weather, habitat and the nature of making estimates can complicate year-to-year comparisons, but the counts indicate a degree of stability. At the Boynton Inlet, Weber's and Schofield's team members discovered several birds they’d been hoping to find, including sandwich terns. They saw seven of the plunge-diving birds. “To see so many sandwich terns is unusual,” Weber said.

For birders David and Jan Conley, who are visiting from Wisconsin for the season and joined Schofield’s team, spotting frigate birds and gannets was a highlight.

“We were hoping to see frigate birds this trip and we saw several of them,” Jan Conley said.

The Conleys have participated in the South Florida count a handful of times.

There was also good news for owl fans, with all four species of owls found in South Florida included in the latest count.

Among these were burrowing owls, which hadn’t made it into Weber’s numbers for several years.

“Recently, it’s been tough to find them in the count circle,” he said.

Once Weber has compiled all his numbers, they’ll be reviewed by a state compiler and submitted to an international database. 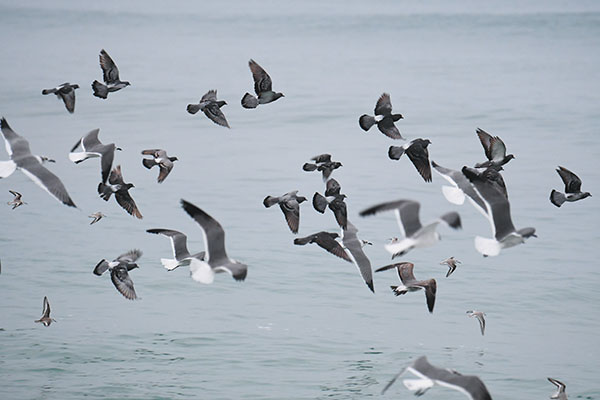 Startled by a passing jogger, pigeons, gulls and terns take flight together after resting on the shore south of Atlantic Avenue in Delray Beach.

About the Christmas Bird Count

During the 1800s, when Americans thought there was a never-ending supply of wild birds, there was a tradition of organized hunts to see how many birds hunters could kill.

Since photography had not matured as a study technique, artists like John James Audubon usually killed their subjects.

In 1900, ornithologist Frank Chapman suggested that a count of living birds would provide a census of birds and help to preserve them. The Christmas Bird Count was born.

The National Audubon Society administers the annual Christmas Bird Count. With more than a century of data, the CBC is considered  the most reliable yardstick of the health of birds in North America.

The process is simple: Small groups of bird watchers use guidebooks, spotting scopes, binoculars and sometimes cameras to count and identify  birds in the same locations year after year.  This census is compiled first at the local level and then national level. A snowy egret feeds in a retaining pond at Woolbright Road and A1A in Ocean Ridge. 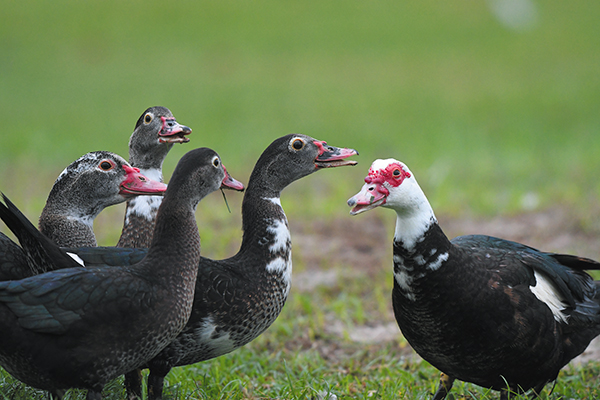 Muscovy ducks appear to be chatting at The Little Club in Gulf Stream.