Visionary and stained glass artist Conrad Pickel lived in Boynton Beach from 1974 to 1994.
A six-month-long exhibition celebrating his art and his imprint on Boynton Beach is on display on the second floor of the Boynton Beach City Library. The exhibition, which opened May 24, features more than 36 pieces of art, including stained glass, colored sketches, charcoal prints, pen and ink drawings, oil paintings, a self-portrait, a wood carving and a mosaic.
The exhibition also showcases a sample of decralite, a type of glowing, stained glass block designed for everyday architectural installations that Conrad Pickel developed in 1968.
“It’s an honor to celebrate Conrad Pickel,” said Debby Coles-Dobay, city of Boynton Beach public art manager.  “He was such a visionary artist for the city.” 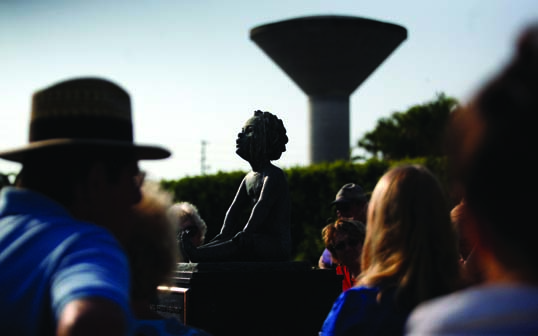 During his two decades in Boynton Beach, Pickel brought his unique stained glass designs to city churches, the mausoleum at Boynton Memorial Park, a nonprofit center for the arts called Gallery Fantasia, an industrial park where he had a studio and he even had plans for a stunning, stained-glass-encased city water tower.
In addition to the art exhibit, which was curated by Coles-Dobay and Paul Pickel of Conrad Pickel Studios, the May 24 kick-off celebration featured a guided bus tour, a stained glass demonstration and presentations on Conrad Pickel’s art and career.
About Conrad Pickel
Born in 1906 in Germany, Conrad Pickel came to America at the age of 21 after apprenticing and learning the art of stained glass at the famed Mayer Studio in Munich.
Pickel started his own stained glass studio in Milwaukee in 1947 and it quickly grew to be one of the leading stained glass studios in the United States. In 1956, Pickel started a branch of his studio in Vero Beach.
Pickel lived in homes in Vero Beach and in Pompano Beach before moving to Leisureville in Boynton Beach in 1974.
Paul Pickel, who runs Conrad Pickel Studios in Vero Beach, spoke about his father’s paintings, sculptures, mosaics and stained glass at the Boynton Beach City Library. 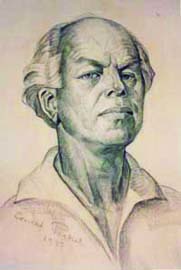 He described his father as a very prolific artist who started his designs and sketches in the wee hours of the morning.
“He’d wake up at 4 in the morning and start thinking about what he was going to do that day,” Pickel said.
He said his father wished he had a “mind camera” to capture all his ideas.
“He designed and designed and his imagination just kept going,” Pickel said.
Pickel said a lot of his father’s ideas were “out of the box.”  As a businessman, Pickel “pooh-poohed” some of this father’s ideas because of the cost the materials involved. But his father never listened.
Pickel said having fun was very important to his father and that he enjoyed working with children.
Pickel called the oil painting I Am the Light of the World, featuring a striking blue-eyed Christ figure, one of his father’s best paintings.
“Those are Pickel eyes. I love the eyes,” Pickel said of the painting, which is on display at the Boynton Beach City Library.
For his stained glass designs, Conrad Pickel was known for his strong use of black for delineation and “Pickel blues,” which his son described as “a certain range of blues, a soft cobalt blue, a little bit of gray, a little bit of purple, not hot.”
Pickel remembers his father saying, “Use more black, use more black. He liked to use black to make the windows stronger.”
Pickel said his father used very strong lines in his stained glass and with just a few lines could capture the sweet faces of young children or the expression of love from Mary looking down at her son, Jesus. 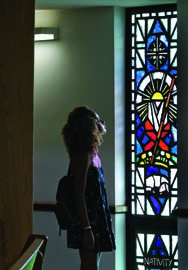 “They’re very simple windows but you walk in and they’re just so clear. They’re beautiful,” Pickel said of his father’s stained glass designs.
Pickel also spoke about Gallery Fantasia, an angular-shaped building with large columns of Conrad Pickel’s decralite blocks, a mural, and a small tower located at 1000 S. Federal Highway.
From 1974 to 1983, Gallery Fantasia was home to Conrad Pickel’s Palm Beach Center for the Arts, a nonprofit artistic gathering place for the community.
All programs were free. A sample program shows the opera guild performing, the drama guild performing, a performance from a pianist, and a lecture on stained glass.
“He had a grand piano and invited guests to perform,” Pickel remembered. “They would hold concerts on Sunday.”
Paul Pickel concluded his presentation by saying, “My father was a talented, out-of-the-box designer and person. What I remember about him most was his enthusiasm, his enthusiasm for art, his enthusiasm for life.”
Conrad Pickel said of artists, “People don’t know how beautiful the world is. They have to learn about it. It’s up to the artist to bring something very important to life. Otherwise, it’s just an existence.” 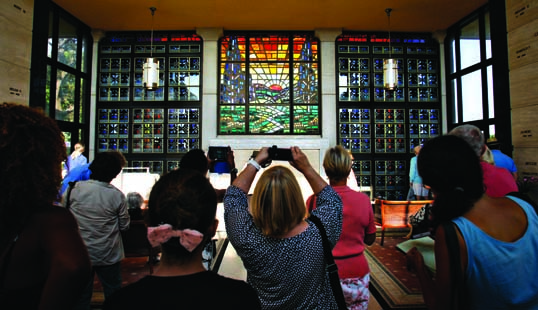