Justin Hearn used a DSLR camera to shoot his short film One Year. It was produced in less than a day, as part of a contest called 24HourFilmRace. Tim Stepien/The Coastal Star

On your mark ... Get set ... Make a movie!
At exactly 10 p.m. on May 18, the rules appeared on Justin Hearn’s laptop.
His mission, should he choose to accept it, was to create a video in less than 24 hours.
The video could last no longer than four minutes. It had to be based on the theme of “One.” It had to feature a character listening to music. It had to include the number 1. And it had to be uploaded by 10 p.m. on May 19.
In cities all over the world, more than 750 video teams were receiving the same instructions for the “24HourFilmRace,” sponsored by HTC One, the Taiwanese smartphone manufacturer.
On June 27, when the winners were announced from the stage of Miami’s Colony Theater, Hearn’s submission, One Year, was named second runner-up in that city’s division, chosen from 25 titles that qualified for screening.
It wasn’t the Academy Award for Best Picture, but of those 750 entries, it was the only one shot in Highland Beach. “I shot it at my parents’ house, and on the beach there,” says Hearn, 30, of Delray Beach. And he didn’t need 24 hours.
When the instructions appeared on his iPad, Hearn was waiting at the Barnes & Noble booksellers on Glades Road, along with his crew and actors Marc Castellano, Carolina Chang and Adam Goldberg. They tossed around ideas, got a sense of what they might do — and went home.
At 9 the next morning, they gathered at his parents’ house.
“We finished by noon,” he recalls, “and I edited from 1 to 4 p.m. I couldn’t find the right sound effect for a fist punch, but for a 24-hour piece, I’m pretty satisfied with it.”
One Year (http://hearnstudios.tumblr.com) is a vaguely surreal, beautifully eerie episode that begins when a young man is awakened by a phone call that seems to imply he has only one year to live. What it lacks in linear narrative it more than makes up for in dreamlike cinematography. The colors are thin, not quite black and white, but not full color, either.
“I used a process called bleach-bypass,” Hearn explains. “It’s a software for color grading.”
Clearly, this is not a novice filmmaker’s first effort.
Hearn grew up in Boca Raton, earned a degree in computer animation at Florida Atlantic University, attended film school at New York University and has taught film and television production at Atlantic High School in Delray Beach.
He’s the staff videographer at Lynn University, responsible for producing short films for the school’s website, YouTube and other marketing purposes.
“I have pretty much total freedom at Lynn,” he says. “I was able to create a video for our memorial to the students who were lost in the Haiti earthquake, and my next project is to do one on the  October presidential debate we’re hosting.
He’s also done freelance work for Maxim and Men’s Health magazines, as well as the Billboard Latin Music Awards in Miami. “But my dream is to be a director of photography for independent films,” he says. “I love The Sopranos, The Wire, Mad Men ... I love stories about morally gray characters.”
In the meantime, though, he’s now added three minutes, 30 seconds of fiction to his documentary experience.
“It was just a fun thing to do,” he says. “It didn’t feel like work, but making a documentary is a lot easier than making an interesting narrative film.”
And there’s been one reward beyond his second runner-up finish:
“I got asked to do my first wedding.” 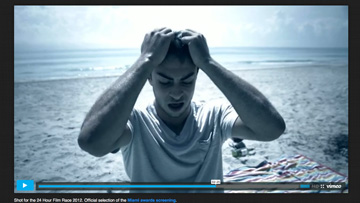