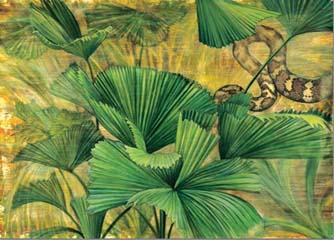 Elizabeth Thompson’s house is a proper Old Florida house, shaded by greenery, all-but-enveloped by greenery — Tarzan wouldn’t look out of place, swinging past on the vines that dangle from leaf-entwined banyans — a house bedecked with narrow balconies and white gingerbread trim to offset its butter yellow clapboard exterior.

If not for the ocean behind it, the setting might be a jungle-y Everglades, perfect for an artist who has taken the ’Glades into her heart.

On this mid-afternoon in February, she is fielding phone calls, finalizing details for framings and invitations and brochures and publicity for her upcoming “Stories From the Everglades,” a one-woman show in every sense.

“This is a very bold move for me,” she says, standing in the entryway of her 19th-century Ocean Ridge home, originally one of five cottages that belonged to Maj. Nathan Boynton’s late, great Boynton Beach Hotel. “I have not shown the Everglades paintings in Florida before, and I wanted to show a lot, the whole enchilada, so I’m doing it myself.” 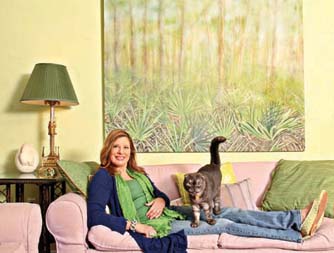 Elizabeth Thompson and her cat Dallas, a Scottish Fold,
relax beneath a painting of Thompson’s titled Palmetto Morning.

The doing began back in 2006, when Thompson spent the month of November as Everglades National Park artist-in-residence, a program she applied to after learning of it “just scooting around the Internet.”

Acceptance came at a difficult time. Her husband of 30 years had just died and, as she says, “I needed to reboot.” The thought of getting away appealed; the thought of the Everglades as getting-away-to place gave pause.

“This meant that I lived alone in the swamp, in Spartan quarters, without phone, television or Internet,” Thompson writes on her website. “I was unprepared for the power of the experience. Initially, the possibility of an encounter with alligators, snakes, scorpions and panthers was terrifying. As the time for my adventure drew near, it was the reality of living alone in the wilderness (with the exception of the park rangers with whom I ‘slogged’ through the swamps), that was truly scary.” Uneasily at first, she settled into her accommodations at Arthur R. Marshall Park, half of a spare, single-story duplex, modestly equipped — a washer and dryer required venturing out, across an open area, where goodness-knew-what might lurk — but boasting a small air conditioner. “I did my laundry at night,” she recalls. “That was the only scary part. It’s so dark. I mean, so dark. There isn’t a flashlight big enough.”

For company, she brought books, steeping herself in the magical realism of Anne Tyler and Alice Hoffman. She jotted notes in a journal. She took photographs. She painted.

And, every day, she explored, often with park rangers as her guides.

As the days melded into weeks, her solitude and surroundings brought healing. “The noise in my head got quieter and quieter,” she says.

In the Everglades, she limited herself to watercolors. Back in Ocean Ridge — “my base,” she calls it, as she lives part of the year in New York and spends two months in Paris — she began working in oil, experimenting with technique and modes of expression. She calls her earlier pieces “the flat paintings,” photographic in style. Later, she began playing with focus and depth of field and, as she says, “letting accidents happen” to create a blurring effect, a puddling of paint, a bubbling of pigment when it mixes with turpentine or kerosene or linseed oil.

Her show, which opens in Palm Beach on March 5 and runs through April 5, will showcase it all: the watercolors, the flat paintings, the more experimental ones, a series that re-imagines iconic paintings in an Everglades setting: Masaccio’s Expulsion from the Garden of Eden (the snake is a python), Manet’s  Le déjeuner sur l’herbe, Rousseau’s Flutist.

In Manhattan, Thompson is represented by the Leila Heller Gallery, which exhibited the series last year. In South Florida, on her own to scout a display space, she found it in the Royal Poinciana Plaza. A good friend, Maribel Alvarez — “I’m a huge fan of her work,” she says — has helped spread the word about the upcoming show.

In the Florida room of Thompson’s house, the phone rings, the sixth call in an hour. This time, it’s the printer asking about the flier that promotes her show. She picks up the prototype; turns it over, front to back; answers a question or two; thanks the caller; hangs up.

“That’s what I do all day,” she says and smiles, ticking off the raft of minutiae that accompanies the planning of her own art show. “Answer phone calls, answer emails. This is a total experiment.”  Ú