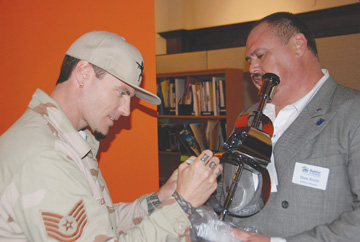 Rob Van Winkle, aka Vanilla Ice, signs a lamp for Hans Reide of Habitat for Humanity. The lamp will be auctioned
at Habitat's new 'ReStore' opening in Delray Beach. Photo by Thom Smith

Check out the tats, the piercings, the hip-hop attire, and the coolness. Cool as ice. Yet, deep down inside, Rob Van Winkle, popularly known as Vanilla Ice, is a regular guy. Oh, sure, he loves fancy cars and the nightlife, and he remains active in show business. In December he played Captain Hook in a British pantomime production of Peter Pan, but if he hadn’t knocked pop music on its derriere with Ice Ice Baby way, way back in 1989, he could very well be a carpenter.

In fact, he is a carpenter, of sorts. In his DIY Network TV series, The Vanilla Ice Project, entering its second season, he renovates homes in Wellington, each episode dedicated to a different room. Tying in with his latest project, he’s hooked up with Capitol Lighting in Boca and Habitat for Humanity for its Making Lives Brighter campaign. Through Feb. 28, anyone who donates old lighting fixtures to any Capitol store will save 10 percent on new fixtures and a tax deduction from Habitat.

“Twenty years ago I would never have dreamed this,” Van Winkle said during a recent stop at Capitol’s Boca Raton showroom to publicize the campaign. “I can’t believe it’s all happened. It amazes me. I’m blessed.”

He added: “I hope we can branch out on the show and go to other areas. I’d like to do something in Palm Beach or Boca. I have friends there.”

Van Winkle autographed a curvy chrome lamp at Capitol that will be put up for auctioned on eBay to raise money for Habitat for Humanity and to publicize the Feb. 18 opening of its Delray Beach “ReStore:” at 1900 N. Federal Highway.

If you can’t wait for Valentine’s Day for that love life boost, consider that the ancient Greeks and Egyptians — and some present-day experts — have considered garlic an aphrodisiac. So why not start the weekend before with the Delray Garlic Festival at Old School Square? The “Best Stinkin’ Party in Town” offers garlic in every shape and form, competition to crown the 2012 “Garlic Chef,” plus a little music to boot. The entertainment bill this year includes Uncle Kracker, Andy Childs, G. Love & Special Sauce, plus a Sunday full of tribute bands playing the music of Billy Joel, Bon Jovi and Journey. Admission is only $10 per day and proceeds — $350,000 so far — benefit local youth education and arts organizations. To “Eat, Drink, Reek!,” see dbgarlicfest.com.

Park Tavern is now open in Worthing Place on Delray’s Atlantic Avenue. It’s from the restaurateurs behind Cut 432, the steakhouse.Brandon Belluscio, one of three partners, says, “It’s an American tavern, focused on farm fresh, local and sustainable foods whenever possible.” On the menu are prime rib, spaghetti and meatballs, salmon tartare, Maine lobster pot pie and other moderately-priced diner favorites, he said. Another partner, Anthony Pizzo takes the lead in the kitchen.     Belluscio’s name may ring a bell with Boca diners – he and his father were behind Catch 22 on Federal Highway.

Palm Beach may be the ball capital, but Boca has its share of society galas and the season is heating up. The Building Hope Gala, Feb. 4 at The Polo Club of Boca Raton will celebrate 30 years of work by Food for the Poor. Its goal: Raise enough money to build 100 residences and a community center and begin an animal husbandry project in Deuxieme, Haiti. Tickets, $225, (888-404-4248).

A day later at the Ritz-Carlton in Manalapan, Christopher Kennedy Lawford will speak at the  spring luncheon for the Comprehensive Alcoholism Rehabilitation Programs. Tickets: $150-$500 (844-6400, Ext. 228).

The Boca Raton Museum of Art boasts a stunning display of photographs by Patrizia Zelano and Martin Schoeller through March 18, but on Feb. 18 attention turns to the Boca Raton Resort as the museum looks to the future with its Visionaries Ball.  Tickets: $350 and up (392-2500).

Bethesda Hosptial and its foundation celebrates its 65th anniversary at The Breakers March 3 with the “Phantom Ball,” featuring a performance by Broadway Phantom Davis Gaines and co-star Teri Bibb. Tickets, $350, (737-7733). 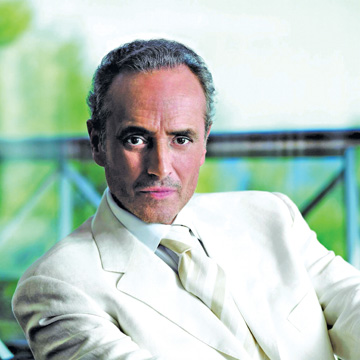 The Boca Raton Festival of the Arts, which opens March 7 with Jose Carreras in concert, has opened a “pop-up” store at the northeast corner of Mizner Park adjacent to the amphitheater to sell tickets. The pop-up will be open Thursday through Saturday from 5-9:30 p.m. until March 18.

Popping in on the pop-up’s opening day Jan. 19 was historian and Boca winter resident Doris Kearns Goodwin, the festival’s author in residence. She’s on the bill for March 18. Jason Walton, chief of staff at Lynn University, above,
and Jessica Corneille, below, a 2007 Snow Scholar and a
kindergarten teacher at Forest Park Elementary School,
were also on hand. Photos by Tim Stepien 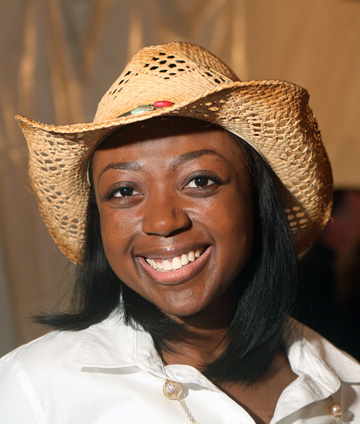