reborn as The Old Arcade 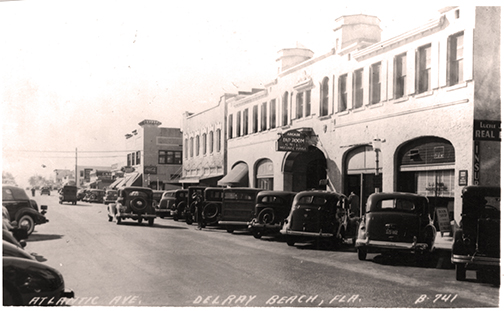 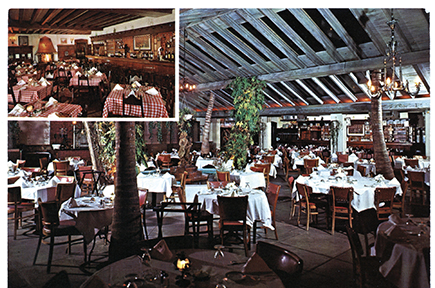 A postcard depicts the dining room in the ‘60s. 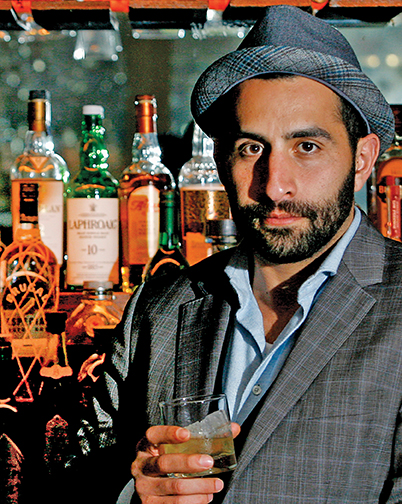 Caffe Martier owner Eli Kamholtz has opened The Old Arcade with many of the original features intact.

When he was a boy in the 1940s, Sandy Simon sold newspapers up and down Atlantic Avenue.
Paper, sir? Paper, sir?
“I’d go from table to table in the old Arcade Tap Room, selling the Miami Daily News for a nickel,” he says with a nostalgic chuckle.
Delray Beach had a population straining toward 4,000 in those days, and chances are most of them dined and drank at the old Arcade.
“There was no roof over the courtyard back then,” Simon remembers. “Tall coconut palms, and it didn’t try to be anything but a restaurant and lounge. The prices were attractive for the middle class, although the very wealthy also went there.”
The Arcade Tap Room was a landmark on the avenue even before Alexander “Sandy” Simon was born in 1937, and seven decades and several reincarnations later, it’s back yet again — or hopes to be.
On Dec. 5, 2015 — the 82nd anniversary of Prohibition’s demise — Eli Kamholtz, the owner of Caffe Martier, opened The Old Arcade in the space that once housed the fabled taproom’s east bar.
“We were turning this into a private event space,” he said recently, “and we started hearing more and more stories, about high school graduations in the 1950s, wedding receptions. People who’ve lived here for 65 years started telling us about the good old days. Then we heard that in Prohibition they ran the numbers here and it was a speakeasy.”
Nowadays, Caffe Martier occupies what was once the Arcade Tap Room’s courtyard. A bar has replaced the central fountain, the palms are gone and a roof’s arrived, but never mind. The new Old Arcade is still at 411 E. Atlantic Ave., and the back alley door to the side bar survives, with a neon arrow pointing to “The Old Arcade.” The mahogany bar’s original, and so’s the woodwork on the walls and ceiling.
Old bars and restaurants gather a lot of myths and memories over the decades, and those grow sweeter when chased by alcohol, and time. Newspapers aren’t a nickel anymore, or sandwiches 50 cents, and the man who made the Arcade Tap Room shine is long gone, too. 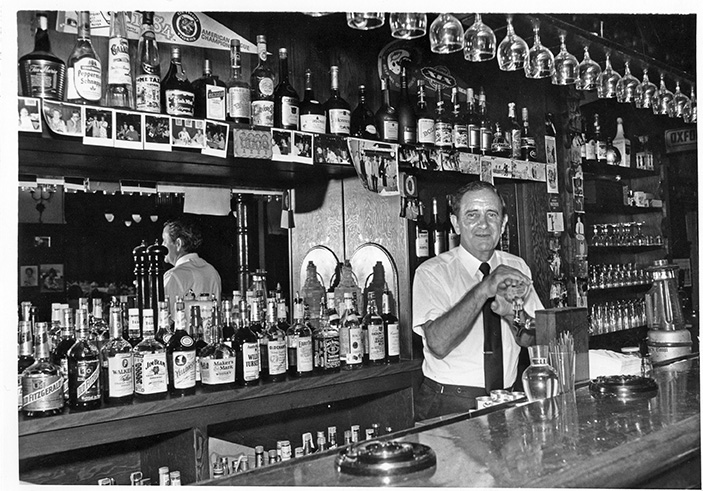 ABOVE: Leslie Scarce, pictured in 1987, worked at the Arcade Tap Room for 24 years at the time the photo was taken. 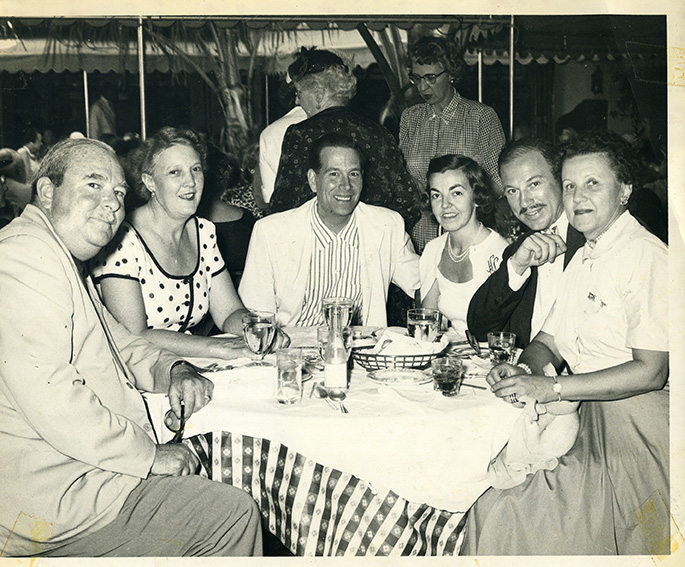 Tom Gaglione and Mrs. Alice Denyes seated at the Arcade Tap Room in an undated photo.

Bill and Helen Kraus were honeymooners in their early 20s when they arrived in town in the mid-1920s. Bill had $16, and

Florida had a real estate boom that promised lots of work at good pay. The $16 didn’t last, and neither did the boom.
Kraus found work cleaning the Boca Raton Hotel, saved his money and opened a tiny coffee shop in the Firestone gas station at Atlantic Avenue and U.S. 1 before moving his business to the Arcade.
Designed by pioneer architect Samuel Ogren (1899-1988) for the Atlantic Avenue Co. in 1925, the two-story Mediterranean Revival building was intended for stores and offices, many of them selling real estate. Then the boom went bust and the Atlantic Avenue Co. along with it.
The landowner, Adolf Hofman (1871-1953), foreclosed, and then leased Kraus a small space in the arcade leading from the sidewalk to the courtyard. Kraus added sandwiches and buttermilk to his menu, and eventually the little shop expanded to three of those spaces.
In 1932, Kraus persuaded Hofman to rent him the large courtyard for an open-air restaurant and lounge. The Arcade Tap Room was born that year, and so was a daughter named Carolyn.

“Well, I’m not sure I know all the facts,” Carolyn Kraus Cunningham says. “I was just a baby. But it was no major speakeasy, I can tell you that.”
Bill Kraus’ daughter is 83 now and still living in town. Her father built the courtyard’s Spanish fountain with the dolphin sculpture himself, she says, as well as the big mahogany bar.

As for the tales of secret passwords and bootleg booze, she has her doubts. True, rum runners from the Bahamas did dump their cargo on Delray Beach and bury it behind the dunes; but now some folks even claim there was a secret tunnel between the Tap Room and nearby Colony Hotel, for transporting illegal potables to the hotel guests.
“I never heard such a thing as that,” Cunningham says. “My dad may have picked up some liquor from those boats. I hear that sort of thing.”
In other words, Bill Kraus may have helped his coffee shop regulars score a bottle, but if he did it wasn’t for long. The Tap Room opened in 1932, and Prohibition died a year later.
“When it rained, people would run in and try to find a spot near the bar,” Cunningham remembers. “And the waiters would run around with those flit guns to try and keep the mosquitoes off your legs.”
The waiters were hired from Pullman railroad cars, she recalls. “They all dressed like Pullman car waiters, black pants and little white jackets. All the waiters were black.”
One of those black employees, William “Willie” Franklin, became Kraus’ trusted assistant, respected by both customers and co-workers.
“He was the bartender, and my father’s right-hand man,” Cunningham recalled. “He was there at all times and practically a partner.”
Franklin’s house is now a Delray Beach historic landmark.
Bill Kraus ran the business for 16 years and died of cancer in 1948. He was only 44, but in those 16 years he created what old-timers miss most.
Not the fountain, not the bar, but the sort of place where you could get a warm welcome, a cold beer and mix with rich and poor alike.
“I have a Life magazine autographed by J. Edgar Hoover,” Cunningham boasts.
The FBI director and Sen. Richard Nixon, Errol Flynn and Gary Cooper, Joe Kennedy and Gloria Swanson came to Palm Beach, and then they came down to the Arcade Tap.
In the ’40s and ’50s, cartoonists now long forgotten rented the Tap Room’s second-floor offices as studios. Pat Enright, the political cartoonist, and Fontaine Fox, creator of the Toonerville Folks comic strip. H.T. Webster and Zack Mosley. They drew upstairs, drank downstairs, and in time the Tap Room’s walls were adorned with their work.

When Bill Kraus learned he had cancer, he sold the business to Bert White, who ran it until his own death two years later. In the 1950s, Bunny Fertita, a Fort Lauderdale restaurateur, took over the lease, renamed the business the Charcoal Pit, added a roof to the courtyard and tore out the brick fireplace in the bar.
And then, in 1961, Jimmy Hallas arrived and ran the place for the next 28 years.
“It was a fabulous spot back then,” Bruce Gimmy says. “I have great memories.”
Gimmy was 21, a Michigan State University dropout when he arrived in 1964 and waited tables for a season.
“I got off the turnpike and drove in and it was like Tobacco Road here back then,” he says. “Until you got across the railroad tracks, there was no civilization.”
Beers were 5 cents and mixed drinks 50.
“Snooky Lanson. Remember Snooky Lanson?”
Probably not. Lanson (1914-1990) was a big band singer who went on to host television’s Your Hit Parade in the 1950s.
“One night Snooky Lanson hit his wife on the shoulder and she went backwards into the fountain.” Gimmy still laughs at the memory. “I grabbed a leg and the maitre d’ grabbed a leg and her dress went up and she wasn’t wearing …”
You get the picture.
“I said, ‘Are you all right?’ and she said, ‘We need another drink here,’ and they went on like nothing happened.”
Fifteen years later, Gimmy was back, and spent another seven, from 1979-1985, as the nighttime bartender.
“The drunks, you cut ’em off,” he learned. “A number of guys thought I was pouring them a drink when I had my thumb over the bottle. You can get away with that when they’re that drunk.”

By the 1960s, the population had surpassed 12,000, and Sandy Simon was no longer a little boy hawking newspapers. He was a grown man, and a customer.
“Everybody in town was there,” he says. “Construction workers would drink with the very wealthy.”
One night, he’s sitting at the bar, nursing a glass of water with a lemon.
Just water, Simon says. Honestly.
“And this construction worker thought it was vodka,” he recalls with laugh.
“How much you gonna have?” the construction worker asked.
“Well, my doctor says I should drink eight glasses a day.”
The construction worker paused, then, “Who’s your doctor?”
Oh, the stories. 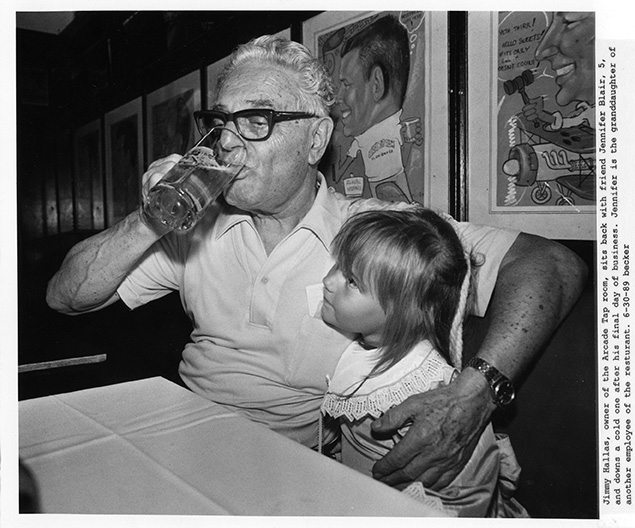 Jimmy Hallas has a beer while sitting with Jennifer Blair on his final day of business at the Arcade Tap Room in 1989.

On June 30, 1989, Jim Hallas closed The Arcade Tap Room. A trio played For Once In My Life while the old-timers dined on prime rib, pork chops, broiled flounder and memories.
Once upon a time, Hallas said, he served 500 meals a day and employed 125 people. Now he employed 21. Business was down 40 percent and he’d been trying to sell for two years.
“There’s too many restaurants anymore,” he said.
Bruce Gimmy worked for Hallas until that last day, and then opened The Trouser Shop, a clothing store just down the block.
“The last time I saw Jimmy, he was living in an apartment above where The Popcorn House is now and leaving for Greece,” he says.
“Bruce,” Hallas told him, tearfully. “I’m a failure. I’ve only got $10,000.”
No, you weren’t a failure, Gimmy told him. He’d touched so many lives, both the help and customers, during those 28 years he owned that bar.
“Jimmy was a good guy,” Gimmy says. “Charitable, kind to people, but his ego took over. He knew how to make money, but he didn’t know how to manage it.”

Now the population of Delray Beach is 65,000, and the new Old Arcade is open for business.
“We’re starting to get a group of regulars,” Caffe Martier’s Kamholtz says. “We’re hoping by next season we’ll be busy enough to have reserved seats at the bar and tables.”
Kamholtz envisions a cozy spot with spirit and wine classes, movie nights, food and drink pairings.
Maybe even, for old times’ sake, a password for entry from the alley.
“Being in a historic building and seeing the modernization under our feet, we just want to preserve a little of the history.”
If he succeeds, the drinks won’t be 50 cents, of course, and they’ll be legal, but that wasn’t what made the old Arcade Tap Room so successful anyway.
“If he wants to adopt the ethos of the original, it might work,” Sandy Simon says. “The Arcade Tap Room is an iconic expression of the character of Delray Beach. Customer-friendly, generous drinks and reasonable prices. Excellent service and a warm welcome.
“I hope he succeeds and provides our downtown with some semblance of the original Bill Kraus Arcade Tap Room.”

Much of the historic information in this story was gleaned from Remembering: A History of Florida’s South Palm Beach County, by Sandy Simon; the Delray Beach Historical Society archives; and The Palm Beach Post. For more information, visit www.sandysimon.com and www.caffemartierdelray.com.