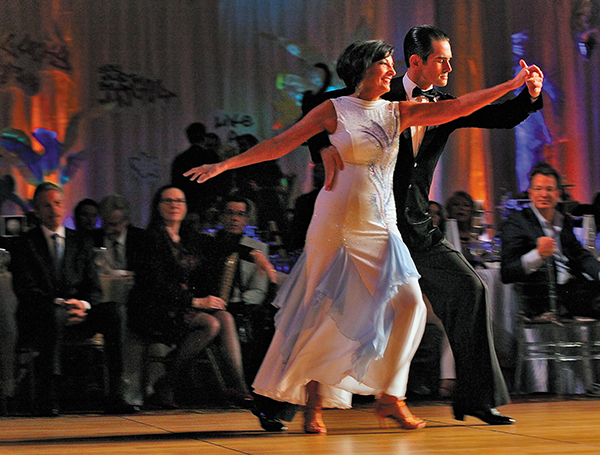 Seldom is the Boca Raton Resort & Club in such terpsichorean splendor. On Aug. 19, the Mizner Center’s Royal Palm Ballroom was filled with dancers from around the globe — pros, amateurs and pro-ams — for the Killick Klassik, a weekend-long competition with more than $50,000 in cash prizes, plus scholarships and trophies.
If you appreciate top-notch ballroom dancing, this was the place to be.
The crowd was much larger in the adjacent Grand Ballroom and the dancing was, shall we say, a bit less refined. The payoff was much greater, though not for the dancers.
The 10th annual Boca’s Ballroom Battle paired community leaders, all rank amateurs, with professionals from the Fred Astaire Dance Studio, for competition in fundraising for the George Snow Scholarship Fund. Their success was measured by how much money they raised and by the prizes for the best man and woman fundraisers: mirrored balls.
Started in 1982, the fund has awarded $9.2 million in grants to more than 1,400 students, 300 who now receive assistance. This year it has awarded just over $1 million to 87 Snow Scholars.
Among those on the dance floor were Lisa Kornstein Kaufman, who refuses to let multiple sclerosis hold her back; Elizabeth Titcomb, who, in costume a la La Cage Aux Folles, showed flashes of brilliance; and Logan Skees, a Marine veteran and director of business development at Trainerspace.
The mirrored balls went to community activist Terry Fedele, who raised $124,851, and John Tolbert, who runs the Boca Resort & Club. He raised a record $193,332 of the record $508,000 taken in, obliterating the 2016 total of $336,000.
“We did things at the hotel, even a yoga event,” said Tolbert, who readily admitted to having two left feet, “but we did a lot in the community and when we could, all the dancers worked together. It’s a great cause and it’s great for the community. I loved the fundraising, and the dancing was just a lot of fun.”
***
The U.S. Professional Tennis Association holds its annual convention next month in Orlando. Among its 13,500 members you’ll find a few household names such as the Everts ­—  Chris, Jeanne (Dubin), Drew and John —  Kathy Rinaldi, and Jay Berger. But USPTA members are not, for the most part, players. They help create the household names. They are the teaching pros, the people who create and develop the players.

Rick Macci runs the Rick Macci Tennis Academy at Boca Lago Country Club. But as a coach and guide to the likes of Serena and Venus Williams, Maria Sharapova, Jennifer Capriati, Andy Roddick and Mary Pierce plus up-and-comers Sofia Kenin, Vicky Duval, Tornado Alicia Black and Hurricane Tyra Black, he can claim an impressive résumé.
On Oct. 13, Macci  will become the 20th — and, at 62, the youngest — member of the USPTA Hall of Fame. A seven-time USPTA Coach of the Year and USPTA Florida Hall of Fame inductee, Macci is renowned for his technical, strategic and mental expertise. He has been named Coach of the Year seven times by the U.S. Tennis Association, which recently honored him and Billie Jean King with Team USA Legendary Coaching Awards.
“Rick Macci is one of our sport’s greatest coaching minds, proven by the almost surreal list of champions he has coached and influenced,” USTA Player Development General Manager Martin Blackman said. “Rick’s expertise and passion for teaching continues to keep him as one of the world’s foremost instructors.”
***
Though they’ve dominated the women’s game for more than a decade, tennis is taking a back seat for the Williams sisters. Venus had completed her surprise run to the final at Wimbledon and the U.S. Open was a month away, and with sister Serena’s pregnancy in full bloom, why not throw a shower? But instead of a five-star hotel or the ballroom at their home club of BallenIsles, they chose Nick’s 50’s Diner on Okeechobee Boulevard, just west of Interstate 95.
The guests, including Ciara, La La Anthony, Angela Beyince, Kelly Rowland and Eva Longoria, arrived in ’50s attire — poodle skirts and saddle shoes. Reddit co-founder and father-to-be Alexis Ohanian adopted a greaser look with white T-shirt and leather jacket.
Baby’s due in mid-September.
***
Summer has certainly been lively up in West Palm Beach. Before launching his latest tour, seasonal Palm Beacher Rod Stewart rehearsed with Cyndi Lauper at G-Star Studios. And because G-Star is part of the sprawling G-Star School of the Arts for Film, Animation and Performing Arts complex on Congress Avenue, students served as crew, loading in, setting up and loading out truckloads of gear and watching the rehearsals.
When the producer asked if anyone could play piano for a sound check, student Kiley Thibodeau stepped up to Stewart’s original Hammond B-3, vintage 1952, and rattled off a series of tunes while technicians dialed in the equipment.
Stewart, who’s sold more than 100 million records, and Lauper, who has sold more than 50 million discs and won a Tony for writing the score to Kinky Boots, were impressed. Touring the campus, Stewart took note of the vintage C-47 cargo plane on display and left his autograph on it.
“This is what we do that no other high school or college can,” G-Star founder and CEO Greg Hauptner said. “Many of our students receive real world, hands-on experience working on sets with the cast, crews and stars of multimillion-dollar films, commercials, music videos and rehearsals and more.”
The tour opened July 6 at Hard Rock Casino in Hollywood.
*** 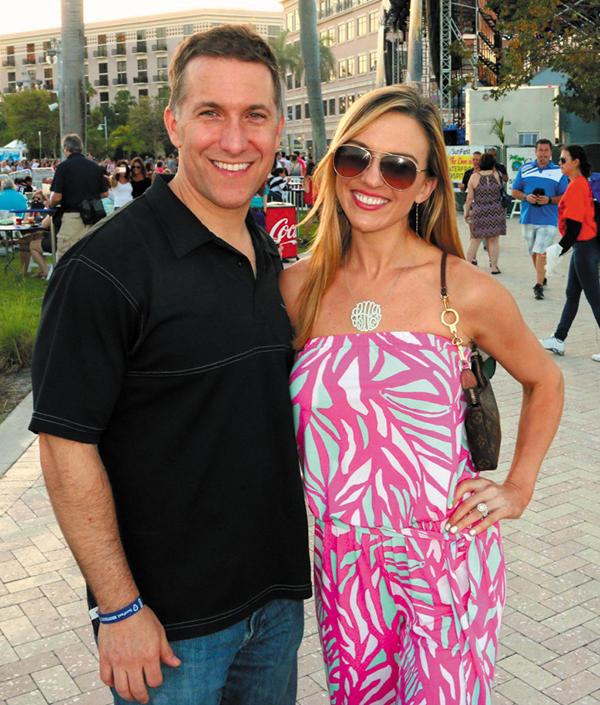 Against all odds … Palm Beach State Attorney David Aronberg served in the Florida Legislature and is reputed to be considering a run for Congress against freshman Republican Brian Mast. He’s a lifelong Democrat. A little more than two years ago he married Lynn Martin, a former Miami Dolphins cheerleader working in public relations. She’s a Republican and a committed Trump supporter. She even named her dog Ivanka.
Early this year, she filed for divorce. The grounds: She wants to have a baby but says he doesn’t; and he wouldn’t stand up for her when his Democratic friends criticized her.
Meanwhile, as the case plods through the courts, Lynn, a Boca Raton resident, is still in action, managing her own public relations business and Palm Beach Book Club, and hooking up with TransMedia Group, a large Boca PR firm and talent and modeling agency.
TransMedia chief Tom Madden, who first hired her years ago for his New York agency, plans to send her on an exploratory trip to Israel and said he might publish a book
by Lynn titled I Make a Great Ex-Wife.
***
Hadn’t heard much from pizza whiz Dak Kerprich since he sold Jerk-O, formerly Pizzeria Oceano, in Lantana to Jeremy and Cindy Bearman last February. They changed the name to Oceano Kitchen, added a canvas awning over the open-air dining deck and tweaked the menu.
Kerprich disappeared, allegedly in search of another atypical spot in Lake Worth or West Palm.
In early August, in true Kerprich style, he resurfaced — at Zapata Mexican Rotisserie on North Dixie in Lake Worth. But only on Mondays and only for a month.
The menu was typical Kerprich — shellfish here, duck there, exotic salads, typical of the oddities for which he became famous in Lantana.
But Zapata is just temporary.
“We are looking at a few spots on South Dixie in West Palm and in Northwood,” Kerprich confessed. “You know me. I don’t like new construction. The next space has to have character, and a good story behind it always helps.”
Stay tuned.
***
Speaking of chefs, Eau Palm Beach has a new boss in the kitchen. Like many veterans in the resort dining business, Executive

Chef David Viviano is well-traveled, coming to Manalapan from Montage Kapalua Bay on Maui after an award-winning stint at the St. Regis Aspen Resort & Spa, where he claimed gold in the 2014 Aspen Mac & Cheese Festival.
In his 20-year career he also has seen action at Westin and Ritz-Carlton hotels and at such high-end standalones as Jardiniere in San Francisco.
Before finding his way to the kitchen, Viviano, a Michigan native, took an ill-considered diversion, taking a college degree at Miami of Ohio in, of all things, journalism. He still enjoys writing but realized his true calling was as a chef.
At Eau, however, he will have to make at least one sacrifice. He enjoys surfing, and with rare exception, Florida’s East Coast can’t match Maui.
***
Across the bridge from Eau Palm Beach, prospects for another restaurant taking over the space at 210 E. Ocean have dimmed. Paesano, the last venture, closed in 2016. Lantana resident Morris Costigan, who owns O’Shea’s Irish Pub on Clematis Street, made a pitch to the Lantana Town Council in July for a European-American bistro, but he said he was unable to reach agreement with property owner Small Corp. of Palm Beach.
***
A few miles south in Delray Beach, new exec chef Blair Wilson has already redone the menu at Max’s Harvest, adding such dishes as buffalo alligator (miso buttermilk, ’nduja hot sauce, blue cheese), tuna-wrapped oysters and charred cauliflower with feta cheese, aji amarillo, golden raisins and capers. And those are just the starters. Main dishes include vermilion snapper (jasmine rice, sorrel, pickled chile, shogun vinaigrette) and a bone marrow burger with aged cheddar, cherry pepper aioli, bread and butter pickles and malted fries.
After serving as executive chef at The Social Club in Miami Beach, the Virginia native was looking for a small-town atmosphere where he could celebrate the best local ingredients.
***
A couple of blocks away, Smoke, the upscale barbecue spot just east of Swinton, has been shuttered after only three years. Owners Scott Kennedy and Stephen Chin cited rising rent and expenses, but they hope to resurface somewhere in Delray Beach soon. Meanwhile, any loyal customers can head south to Fort Lauderdale, where Smoke BBQ offers a more traditional barbecue spot near Galt Ocean Mile.
***
The time has come... Sometime in the new year, 32 East, the granddaddy of Atlantic Avenue’s signature restaurants, will close after two decades. The buyer is Big Time Restaurant Group, a West Palm Beach-based multi-concept operation with footprints all over South Florida, from West Palm Beach to Miami. 32 East will give way to Big Time’s newest venture, Louie Bossi’s, which is billed as high-energy, handmade  Italian. Other Big Time spots in Delray include Rocco’s Tacos and City Oyster.
But regardless if Delray Beach is ready for a restaurant with a bocci court, as is the case at Bossi’s in Boca Raton, 32 East founder Butch Johnson, who’s been on the avenue since 1996, is ready to go.
“A lot of people are sad,” said Johnson, “but it’s not the same town.
“Delray is going to be dominated by high-volume restaurants. They’re going to put a lot of money into renovating this place.”
While Johnson and Big Time boss Todd Herbst have agreed in principle, the deal still faces legal and logistical hurdles. Johnson expects chef John Thomas and the veteran staff will remain in action for several months.
“We’ll probably have little farewell parties during the last months,” Johnson said. “We’ll bring back old bartenders, have a Nick Morfogen night (with the original executive chef, now at Pine Tree Golf Club in Boynton Beach). We’ll say goodbye the right way.”
Since Johnson owns the building that houses 32 East, he’ll still collect a tidy rent check, but he has no intention of leaving the business: “I’m looking around for another city with a CRA [community redevelopment agency] that would like to expand its profile.”