Some impressive performers have dazzled audiences on The Voice and America’s Got Talent, but the route to stardom doesn’t necessarily go through New York or Hollywood. In early June, it passed through the gates of the Royal Palm Yacht Club in Boca Raton.
The occasion: The Red Rose National Awards Gala, culminating the 73rd annual meeting of the National Society of Arts and Letters and its En Pointe Classical Ballet Competition.
Seventeen regional finalists competed for cash prizes ranging from $1,000 to $12,000, and the standards were high. 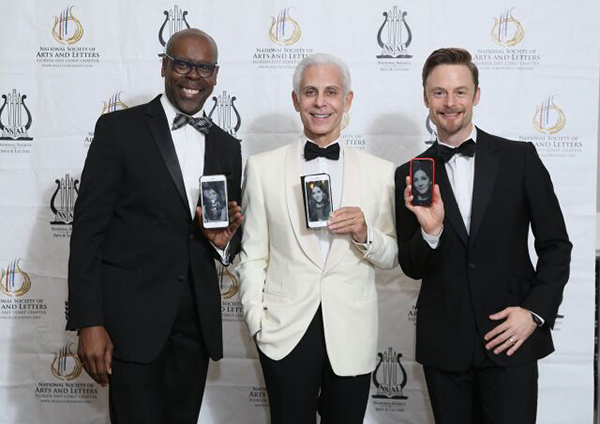 The judges were choreographers Maurice Brandon Curry, whose work ranges from the Queen’s Trust Benefit for Queen Elizabeth II to fashion events for Giorgio Armani; Cynthia Harvey, the first American to perform as principal ballerina for England’s Royal Ballet; Steven Caras, former dancer with the New York City Ballet, author, professional dance photographer and Palm Beach resident; and Christopher Wheeldon, who switched to choreography after performing as a soloist with several international companies.
NSAL also honored Wheeldon with its 2017 Gold Medal of Merit for his unique approach in choreographing An American in Paris, which won the 2015 Tony Award.
High standards indeed. Each dancer performed a solo routine at Florida Atlantic University’s theater on June 2. The judges conferred into the night and the winners were announced at the gala. Each judge also spent considerable time one-on-one with each dancer, offering insight, advice and encouragement.
“They’re so talented. They won’t go unnoticed,” Wheeldon said.
The Yacht Club stage wasn’t conducive to ballet, but the evening wasn’t lacking for inspiring performances by scholarship winners from previous NSAL competitions in music, performing and visual arts.
Mezzo-soprano Zaray Rodriguez, a Cuban-American from Miami, studied voice at Palm Beach Atlantic College and is debuting this summer at the Aspen Music Festival. Bulgaria-born violinist Yordan Tenev and Gainesville-born pianist Bailey-Michelle Collins now study at Lynn University.
***
Speaking of FAU, its annual Festival Repertory showcase of theater and dance continues through July with a drama, a musical and a jazz concert. At the Studio One Theatre, Sense and Sensibility, a modern look at Jane Austen’s classic, switches off with Sondheim and Lapine’s Broadway classic Into the Woods on weekends, the latter running a week longer, through July 30.
On July 15 and 16, the big band sounds of Ellington, Goodman, Basie and Miller will fill the University Theatre. (www.fauevents.com)
***
One earlier Summer Rep show had a bittersweet tone. Heather Coltman played her last FAU concert June 12. A native of Zambia, Coltman served FAU as teacher and administrator for 23 years, the last five as dean of the Schmidt College of Arts and Letters.
She ran 10 departments and was a major force in the development of two platforms of FAU’s strategic plan: “Peace, Justice and Human Rights” and “South Florida Culture: The Region as an International Hub for Arts and Humanities.”
She is also a talented pianist who has performed around the globe as soloist and accompanist. She’s been a fixture at FAU’s annual Piano Gala Extravaganza that features four pianos on stage and sometimes twice as many players.
But now her talents have taken her to Harrisonburg, Va. On July 1, she became provost and senior vice president for academic affairs at James Madison University. U.S. News and World Report ranks it No. 2 among public schools in the South that do not offer doctorates.
***
I don’t have much use for Twitter these days, but for his SiriusXM radio show, country music star Kenny Chesney dropped

a tweet a few weeks back that deserves repeatin’: “Headed down A1A to @bostonsonthebch in #DelrayBeach for this wk’s Bar at the End of the World!”
He describes Boston’s, one of only 11 far-flung hangouts in his first wave of bar ratings, as a place “where time melts and you find friends, whether you’ve met them or not.”

Chesney doesn’t bring an entourage or make a big fuss when he visits, says Boston’s Manager Mark DeAtley. He prefers to sit at the bar — usually unrecognized — and watch a game on TV while sipping a beer or his favorite drink, a Boston Strangler.
***
Speaking of cocktails and Delray Beach, nearly 3,000 guests showed up a few weeks back at the Marriott and other watering holes for Apres at the Beach. The weekend celebration of distilled spirits offered seminars, tastings of more than 80 craft cocktails and a mixology competition.
“Prizefighters Breakfast” was singled out for best cocktail by a jury of spirits experts.  Keith Popejoy, bar manager at newcomer Death or Glory, combined 2 ounces of Tullamore Dew, 3/4 ounce of lemon, a half ounce each of Foro Amaro and honey and “barspooned” it. Then he added Earl Grey Tea Confit and Earl Grey Tea, smoked the glass and finished it off with an ice cube of black and bergamot tea — that’s what brings the big tip!
The “Audience Favorite” award, however, went to Funky Ginger, concocted by Erica Watkins, cocktail chef at The Old Arcade at Caffe Martier: 2 ounces of New Amsterdam gin, 1 ounce of fresh pressed apple juice, 10 ounces of lemon and 1 ounce of simple cranberry-ginger puree, shaken and strained twice.
***
The revelry continues Aug. 1-7 with the second annual Dine Out Downtown Delray Restaurant Week. The Downtown Development Authority has lined up more than 20 restaurants to offer multicourse prix fixe lunches and dinners plus special events ranging from beer and cocktail classes to chef demonstrations.
Special dine-out deals under $10 will be offered, while lunch specials run $20 and less and dinner specials $40 and less.
No special requirements. Diners can simply visit any of the listed restaurants and request the Dine Out menu. Reservations, while encouraged, are not required.
The lineup includes 32 East, 50 Ocean, Big Al’s Steak, Boston’s On The Beach, Caffe Luna Rosa, City Oyster & Sushi Bar, Cream, Death or Glory, Delray Hideaway, Eat Market, Farmhouse Kitchen, JuiceBuzz, Juice Papi, Max’s Harvest, Mellow Mushroom, PRIME, Racks Fish House & Oyster Bar, SALT 7, Sandwiches By The Sea, Sazio and Windy City Pizza. (www.downtowndelraybeach.com/restaurantweek) 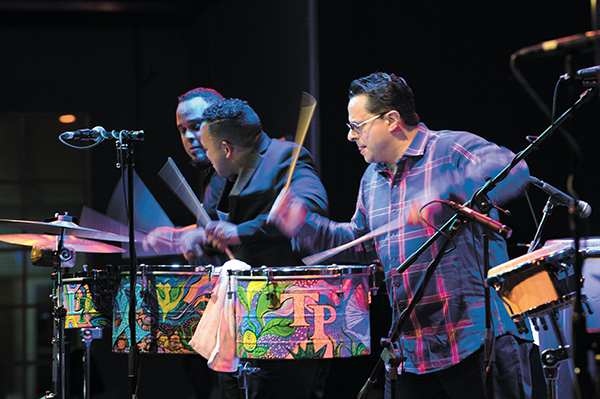 ***
If you like tributes — bands that play the music of other, more famous bands, try Summer in the City 2017 at Boca’s Mizner Park Amphitheater any Friday night through Aug. 11.
Up July 7 is Liverpool Live — the sounds of you know who  — followed by Turnstiles (Billy Joel), the Petty Hearts (guess!), Crystal Visions (Fleetwood Mac) and the final tribute Aug. 11 by Ruffhouse (Bob Marley).
On July 28, the bands will give way to a screening of Moana, preceded by a Polynesian dance show. Symphonia Boca Raton wraps up the series Aug. 12 with “A Space Odyssey.”
Admission is free. Bring your own blanket or lawn chair or rent a chair for $5.
Though not part of Summer in the City, several other shows at Mizner Park will attract attention. On July 29, it’s the Brazilian Bar Sertanejo music event featuring Vinicius and João Bosco, followed Aug. 1 by Straight No Chaser and Postmodern Jukebox.
***
Way down the road, mark Nov. 10 at Mizner for Jethro Tull by Ian Anderson. The name is confusing. The legendary band was dissolved in 2012 — by Anderson. Now he’s back, as are latter-day Tull keyboardist John O’Hara and bassist David Goodier, interspersing a few lesser known tunes among the Tull classics. But it isn’t Tull, technically (legally?) and spiritually. Anderson wails on his flute with the intensity of a youngster just beginning to cut records on vinyl, but with a voice now thicker than a brick, he leaves much of the vocal work to the bandmates, whatever band they may comprise.
***
Many members of the next generation of doctors and nurses are learning their skills at FAU. They’ll need some gear, and for the seventh year an essential wardrobe item —  their first lab coats — will come from members of the community.  A $200 donation provides the coat with the donor’s name in a pocket to be presented at the White Coats-4-Care Reception Aug. 3 in the Delray Acura Club in FAU Stadium. Call 297-4452 for details.
***
For more than two centuries, Bastille Day has been celebrated on July 14, and for decades the Norton Museum of Art has saluted the event at its Art After Dark gatherings Thursday closest to the date. This year, however, the celebration will move to Saturday, July 15, from noon to 5 p.m. and will feature, naturally, all things French —  music, film, language lessons, food, drink and, of course, art.

Highlighting the party will be French Connections: Photography. The exhibit, which opened June 29, draws from the museum’s collection of French photographs, particularly more than 10,000 by Eugene Atget.
And, as Norton’s expansion continues, admission is free!
***
They come and they go. Max’s Harvest in Delray Beach has a new chef. He’s Blair Wilson, former award-winning executive chef at The Social Club in Miami Beach. A Virginian, Wilson has a soft spot for Southern cooking but has developed an international repertoire while utilizing local food sources.
Wilson replaces Eric Baker, who like so many former Dennis Max hires is moving on to his own restaurant, in West Palm Beach. He’ll join Jason Lakow, former GM at Cafe Boulud in Palm Beach, to create Mazie’s, a “comfort food” spot on Antique Row, formerly occupied by  Gulf Stream Bistro & Seafood Market (and long ago by a Burger King).
Of the change, Max said, “I’m proud of the fact that I’ve worked with such great people who have learned from us and then been able to graduate to another level and follow their dreams. It’s the highest compliment to Max’s Harvest and is the natural order of things in our business.”
***
Should you have happened to come upon a wicket, you could be certain that Teddy Prentis would be nearby. Teddy, “Mr.

Croquet” and arguably the game’s greatest ambassador, died in May while in Bermuda for a tournament after his rented motor scooter collided with an oncoming car.
A Delray Beach resident, Prentis, 68, was a regular fixture at croquet centers in Boca Raton, Palm Beach, West Palm Beach, Palm Beach Gardens and Wellington. He also had homes in his native Long Island and Romania.
Said U.S. Croquet Association President Sara Low in announcing his death: “We all loved him for his athletic ability in the sport, his knowledge of and position within its history, his commitment to teaching us to improve our play and his great sense of humor.”
In the early ’60s, the 14-year-old Prentis, then a handyman and refreshment dispenser at Westhampton Mallet Club in New York, swung his first mallet. He won eight national titles and in 1989 was inducted into the U.S. Croquet Hall of Fame. He then turned his attention to teaching the sport, becoming the world’s first professional croquet instructor.
He was instrumental in transforming croquet from an elite game played on estate lawns by old men to one played by fans from all walks of life. He even helped introduce croquet to the Special Olympics. He will be missed.

Tags: national society of arts and letters, around town, column, thom smith
E-mail me when people leave their comments –
Follow