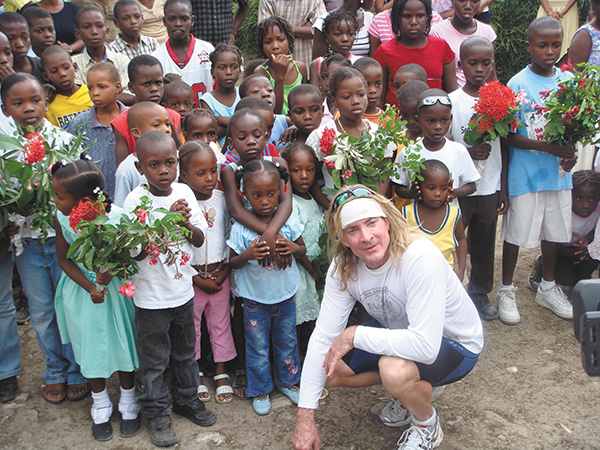 Haitian children surround Delray Beach philanthropist Frank McKinney after they moved into one of the 23 self-sustaining villages his foundation has built on the island. Photo provided

Few folks are more optimistic than Frank McKinney. The longtime Delray Beach resident has built oceanfront megamansions that have sold for $50 million. He has published several books about real estate and even a children’s fantasy. He’s taken his brand of entrepreneurship across the country and run 135-mile ultramarathons across Death Valley.
On Nov. 12, he’ll host a daylong traveling seminar, Aspire, that will start at his “treehouse” on North Ocean, head north to his first “micro mansion” in Ocean Ridge and then return home for a fireside chat. His goal is to inspire the participants to aspire to greater creativity and social impact.
McKinney believes his micro mansion will be the next small thing, with all the luxury appointments of a Palm Beach mansion, but in only 4,000 square feet. Its public unveiling is set for New Year’s Eve, but he’ll sell it now for $3.9 million. He’s already turned down $3.5 million.
Who knows, maybe one of Aspire’s 50 participants will put in a bid. The day will cost $500 ($750 for the bonus VIP session around McKinney’s fire pit), and it’s all tax-deductible. That’s because the money will go to McKinney’s Caring House Project Foundation.
Since 2003, Caring House has built 23 self-sustaining villages in Haiti. They’re a far cry from the micro mansions but far better than wooden huts with thatched roofs. One concrete and steel Caring House can be built for about $4,000 and accommodate a family of eight. Each village contains a school/church/community center, 16 concrete and steel latrines, water filters, solar lighting and hundreds of goats and chickens.
Proceeds from Aspire will build six or seven homes. But because of Hurricane Matthew, the program is in dire straits. Nine villages around Jeremie on the northwest tip of the Tiburon Peninsula took a direct hit. At least 450 homes were flattened by the Category 5 winds. The death toll in Haiti has surpassed 800 and is expected to grow as cholera and other diseases add to the misery.
“We will rebuild, but we need help, more than ever,” McKinney said.
For information or to make a donation, go to www.frank-mckinney.com/caring-house-project.
***
For folks down here, Dennis Kozlowski has been out of sight, out of mind for a decade. He’s been away, at New York’s Mid-State Correctional Facility near Utica, reflecting and planning.

Kozlowski became notorious as the boss at Tyco, brilliant but greedy, making millions but wanting more. It cost him nearly seven years. Since his parole in New York in early 2014, he’s kept a low profile, but on Nov. 9 he’s scheduled to make his first public appearance — at a luncheon of the Gold Coast Tiger Bay Club at City Fish Market in West Boca (www.goldcoasttigerbayclub.com).
Tyco was a small high-tech business in New England when Kozlowski signed on in 1975. It was already growing when he became chairman in 1991, and over the next decade Tyco acquired more than 1,000 other companies and in 2002 was worth $120 billion. Tyco Integrated Security is based in Boca Raton.
Kozlowski became the highest-paid CEO in the U.S. He owned two New York apartments worth $24 million and a $3 million home in Boca’s Sanctuary. But upward of $100 million in excess, including a $6,300 sewing basket, a $6,000 shower curtain and a $445 pincushion, did him in.
“It was greed, pure and simple,” he told the parole committee in March 2015. He lost paintings by Renoir and Monet, the shower curtain and his second wife, Karen. Last December he sold the Boca mansion for $10.3 million.
While in prison, he renewed an acquaintance from the ’90s with Kimberly Fusaro. After his release, Dennis proposed, offering her not a diamond but a cubic zirconia worth about $300. The couple has moved back to South Florida to be near Kozlowski’s two daughters and the grandkids.
With former colleagues, Kozlowski has created Harbourside Associates to provide mergers and acquisitions advice and is co-CEO with Palm Beacher and Netscape founder Jim Clark at Commandscape, a new high-tech security and building management company.
Perhaps more significant, in February he was named chairman of the Fortune Society, a New York organization that helps former inmates re-enter society.
“While I was (in prison) I taught GED courses and I knew that was a step in the right direction,” Kozlowski told Fortune magazine, “but people coming out after spending many years away need so much more than that. They need help to prepare for the job force, to figure out where to live, how to get food, how to survive on the outside. Especially those without friends and family or any kind of support system.”
***
At first it just seemed like good TV. Producers at Good Morning America suggested to co-host Amy Robach that she have a mammogram screening to support breast cancer awareness during the annual October Pink initiative.
A mammogram! Live! In Times Square! She was too young to be worried about breast cancer. She was only 40. Her family had no history of the disease. But fellow host Robin Roberts, a breast cancer survivor, pressed her: If it saves one life, it’s worth it.
“I had no idea it would be mine,” Robach told more than 1,500 luncheon guests Oct. 21 at the 13th annual Go Pink Luncheon at the Boca Raton Resort & Club. The event benefited the Lynn Women’s Health & Wellness Institute and Lynn Cancer Institute at Boca Raton Regional Hospital.

Robach’s mammogram revealed a malignancy. Later tests turned up more tumors, and the cancer had spread to her lymph nodes. A decade ago that would have been a death sentence, but Robach was lucky, although the path to recovery was rife with obstacles. It almost destroyed her marriage to actor turned internet entrepreneur Andrew Shue.
They married in 2010, Robach bringing along two daughters, Shue three sons. But they wanted one child together and were so committed to that goal that Shue had a vasectomy reversed.
“But my oncologist told me I was out of the baby-making business,” Robach said.
She had to fight to keep her sense of security. Their marriage nearly died, but therapy helped them get through tough times. She accepted that she may die tomorrow or live to 100, but can’t let fear control her.
“Before she wouldn’t even go in the pool,” Shue said. “This year she swam with sharks. We do live differently now.”
Both are grateful Robach had that mammogram and stressed the importance of vigilance. “Thousands of women die each year because they choose to wait,” she said before closing with a motto first offered to her by Shue: “Don’t die before you die.”
The gala raised more than $1 million, including $33,000 from its inaugural Fund A Need Flash Campaign, in which attendees made on-the-spot pledges via their smart phones.
***
The lineup — on the court and onstage — is finally set for the 27th Chris Evert/Raymond James Pro-Celebrity Tennis Classic. Evert didn’t have to look farther than Palm Beach to find entertainment for the Nov. 19 gala at the Boca Raton Resort &

Club — Jimmy Buffett.
The celebrity participants, including Emmy-winner Carson Kressley, Kevin McKidd (Grey’s Anatomy),  Jamie McShane (Blood-line), Timothy Olyphant (Justified) and Scott Foley (Scandal), will team on the Delray Beach Tennis Center courts on Nov. 19 and 20 with Evert and pros Martina Navratilova, Andrea Jaeger, Rennae Stubbs, Jesse Levine and Vince Spadea.
Since 1989, the Classic has raised more than $22.5 million to battle drug abuse and help at-risk families in South Florida. Details at chrisevert.org.
***
It certainly won’t be Hamilton and it’s a long way from Broadway, but Jimmy Buffett is making a foray into theater. Escape to Margaritaville will premiere next May at the La Jolla Playhouse in California. Featuring a mix of new songs and Buffett standards, the story follows a part-time bartender-singer who falls for a career-minded tourist.
It’s hardly a unique concept, but La Jolla boasts an impressive legacy: 25 productions went on to Broadway and claimed 35 Tonys, including Jersey Boys, Memphis and Big River.
***
Granger’s, a Delray eatery for more than two decades, will take over the old VFW Post at 802 SE Fifth Ave., about 1 mile south on Federal Highway.  Owner Tim McLarney,  who had been looking for a new space since May 2015, said he was “happy, happy!”
“We have a great lease with 50 parking spaces for 75 seats in 2,783 square feet for the same rate as our current location,” which has 960 square feet, space for 38 customers and six parking spots. That property at Federal and Northeast Second Street, including a 1,500-square-foot house, sold in March for slightly more than $1 million.
He hopes to move by Dec. 1.
A regular customer who is a real estate broker, Lynlee Fraser Glynn, helped McLarney search for a new location. “We came together because we are just a small town,” said Glynn.
McLarney plans to keep the same menu and may hire more staff. For now, he’s doing a happy dance about the new site.
***
Ah, the stories they could tell … but will they? CEO Judith Mitchell, director of programming Lee Bell and Chairman of the Board Michael Bracci will share backstage stories of the Kravis Center’s first 25 years Nov. 7 as The Colony hotel in Palm Beach launches another year of Culture & Cocktails.
Cocktails (with hors d’oeuvres) begin at 5 p.m. followed by the culture at 5:45. Tickets are $65 in advance (472-3330), $75 at the door. Proceeds support the county’s Cultural Council artist programs.
***
A little post-election perspective, courtesy of FAU professor Steve Engle. “The Presidency of Abraham Lincoln at 150 Years: Lessons for a New Age” will be the subject of his lecture at 4 p.m. Nov. 9 at the University Theatre.
A Lincoln scholar who this year published Gathering to Save a Nation: Lincoln and the Union’s War Governors, Engle will provide an overview of lessons learned and possibly unlearned in 150 years. As Lincoln told Congress in 1862: “We cannot escape history. We of this Congress and this administration will be remembered in spite of ourselves.”
For tickets ($25, free for students, faculty and staff), call 297-6124.
Jane Smith contributed to this report.