The Founder, one of the year’s hottest movies, chronicles the exploits of Ray Kroc from hapless seller of milkshake makers to fast food phenom. Michael Keaton plays Kroc and, as often happens with Keaton, critics are raving. Of course, it doesn’t hurt to have a strong supporting cast with the likes of Nick Offerman, B.J. Novak and Laura Dern.
And though you won’t find a Big Mac on The Island, the story has a Palm Beach connection: June Martino, played by Katie Kneeland. If the business world gave out Oscars, Martino would be shoo-in for supporting actress.

Though she had no bookkeeping experience, Kroc hired Martino as his bookkeeper in 1948. But she evolved into the unofficial “vice president of equilibrium,” the glue that held the early McDonald’s organization together.
In Behind the Arches, author John Love wrote: “Martino was a den mother to McDonald’s young managers. And while she got little formal recognition for that role, it made her perhaps the only universally liked executive in McDonald’s.”
In 1963 she hired a broke Michael Quinlan, roommate of her son John at Loyola University in Chicago. In 1987 he was named president and CEO of McDonald’s.
Kroc rewarded Martino with a stake in the company. She was worth millions when she retired in 1968. A decade later, she and husband Lou settled in Palm Beach. They bought the oceanfront lot formerly owned by car builder Horace Dodge and built a main house and five cottages with very un-Palm Beachy blue tile roofs.
But it was the 7-foot-high perimeter wall that spurred occasional run-ins with town authorities. For several years in the late ’80s, her gardener, John Hochella, decorated the walls with paintings of Christmas and cartoon characters — Santa Claus, Garfield, Snow White and her dwarfs. That’s a no-no in Palm Beach, and the town ultimately planted 8-foot-tall sea grapes along North County Road to obstruct the view.
“Spiteful and nasty,” Martino said of the town officials.
In the early ’90s, the Martinos put the estate on the market for $7.5 million. Michael Jackson took a gander but said the 7-foot wall didn’t offer enough privacy. It sold in 1994 for $5.5 million.
A big fan of classical music, Martino served as president of the Palm Beach Symphony and was its greatest patron, but as son John wrote after her death in 2005: “She did not usually give to big organizations, but to people of her own choosing. June worked hard, had an amazingly good life and she always did what she wanted most. She made a difference and left the world a better place.”
***
For decades Bob Vila led viewers through televised renovations of bungalows and estates, row houses and ranches. But now “this old house” has a new meaning.

Bob Vila was born in Miami. His father, an intelligence officer in the Cuban army, had moved the family to Florida at the end of World War II. They returned to the island in 1956, only to return to Florida as Fidel Castro built his revolution.
Vila, 70, became a TV star on This Old House, and now calls Palm Beach home. He doubted he would ever see Cuba again, but even before former President Barack Obama began to open a dialogue with the Cuban government, Vila was on his way.
Ironically, he was approached by the Finca Vigia Foundation to help restore the legacy of an American — but not just any American. The foundation is named for the 12-acre estate of Ernest Hemingway, and it has restored the house and the author’s iconic fishing boat, Pilar.
The house is a museum, the most popular in Cuba. Vila, who co-chairs the foundation’s board, is helping to build a conservatory and archive storage center to restore and preserve thousands of documents, photos and manuscripts.
He’ll no doubt have lots of stories to tell Feb. 6 at the next Cultural Council of Palm Beach County’s Culture & Cocktails event at The Colony hotel. (Tickets, $65 advance, $75 door, 472-3330.)
***
The Frost family has been in the wine business for more than six decades. As a youngster, David Frost hit his first golf balls between rows of grapes in his father’s vineyard in South Africa. With the money he made picking grapes, he bought his first set of clubs.
Over the years he’s done very well with both. On Feb. 9, the night prior to the tee-off of the Allianz Championship at Broken Sound in Boca, David Frost Wines is a sponsor of the eighth annual Grapes of the Green — a party mingling wine, food and the opportunity to meet many of the competing pro golfers. (Tickets at www.grapes2017.eventbrite.com)
Though the family has been making wine in South Africa for more than six decades, in 2010 Frost made Palm Beach County his home away, first renting in West Palm Beach and eventually buying in Delray Beach.
He needed a place to practice and since he had partnered with now President Donald Trump at a pro-am in Pebble Beach, he asked if something might be arranged. The deal was cut: In exchange for practice time at Trump International, he wears Trump’s logo on his shirt, and as he joked in one interview, “I make sure I tell him how much people give me a hard time that I have his name on my chest.”
Colene Frost, David’s wife, also is South African. Her father and the Frosts have been friends for more than half a century, but she didn’t meet David until the late ’90s. A budding romance cooled until they met again in South Africa in 2011. Three weeks later he proposed, but they didn’t marry until 2015. … Reception at Trump International, photos at Mar-a-Lago and the Rolls-Royce courtesy of Trump.

Morgan Pressel is only 28, but it seems like she’s been making headlines on the women’s golf tour forever. As a 12-year-old the Boca resident became the youngest qualifier ever for the U.S. Women’s Open. She tied for second as a 17-year-old amateur.  She’s won five tournaments as a pro, but it’s her work off the course that merits special attention.
In 2003, Morgan’s mother died of breast cancer, and in 2008 she launched the first Morgan and Friends tournament to raise money to fight the disease. For the second consecutive year, the 2017 edition at St. Andrews Country Club topped the $1 million mark, bringing the total raised beyond $6.5 million.
It’s a loyal group. At least half of this year’s attendees played in the inaugural. “I’ll keep fighting as long as I can,” Pressel said.
***
Response from potential customers and the curious was so great that Frank McKinney delayed and expanded the “Grand Unveiling” of his first micro-mansion, a lavishly appointed but almost miniature $3.9 million estate in Ocean Ridge.
The Delray developer had planned to host 113 invitees on Jan. 13, but when the guest list filled in 88 minutes, he added a second showing. It overfilled in two hours, so McKinney moved the party to Feb. 4 and added an earlier third showing complete with martinis and mermaids in the two pools.
The additional showings should provide a bigger boost for McKinney’s Caring House Project Foundation as donations are encouraged. Launched in 2003, the program is building its 24th self-sufficient village in Haiti, each housing more than 200 children and their families. Call 655-8178.
***
Fred Conrad has seen it all … and shot it all. Before landing permanently with The New York Times, he freelanced for Time, Newsweek, New York magazine, Rolling Stone, Ms. and the Times. He’s covered the violence of earthquakes in Haiti and wars around the globe, but he is also celebrated for his elegant portraits and architectural studies.
Conrad’s master photography class and seminar on interactive lighting will headline the High School Pilot Project Photography Exhibition sponsored by the Florida East Coast Chapter of the National Society of Arts and Letters. The Feb. 25-26 exhibition at FAU’s University Theatre Lab will highlight the work of more than 60 student photographers from Boca Raton High, Dreyfoos School of the Arts, American Heritage and Pembroke Pines Charter. The program runs daily, 9 a.m.-4 p.m., and the public is invited. (Info at www.nsalfloridaeast.org)
***
The Chinese New Year — the “rooster” — arrived Jan. 28, but no one complained two days before at Delray Beach’s Crest Theatre when Al Stewart performed Year of the Cat.  Stewart, 71, who still tours regularly, actually penned the melody half a century ago.
Thank MusicWorks, which is bringing to South Florida an assortment of veteran performers and tribute bands: Judy Collins and Livingston Taylor played earlier;  Rus Anderson’s “Rocket Man” tribute to Elton John (Feb. 15);  The Weight (March 1), featuring players from The Band or deeply connected to its legacy, including Band guitarist Jim Weider and Brian Mitchell from Levon Helm’s band.
Singer-songwriters John Sebastian (March 8) and Karla Bonoff (March 15) close it out. (www.musicworksconcerts.com)
*** 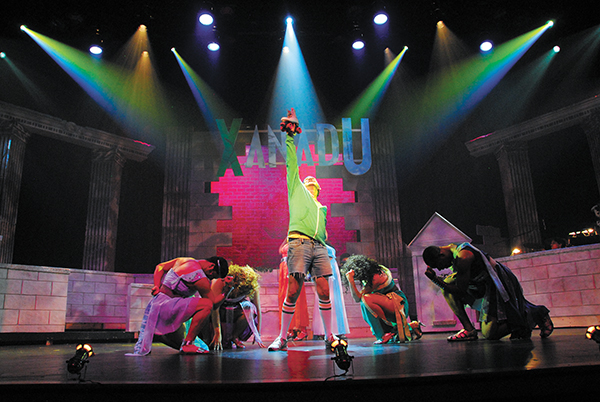 The lights at Old School Square may never go out this month. By month’s end nine shows will have played. They range from Pump Boys and Dinettes (Feb. 3-5) to Philip Fortenberry: The Hands of Liberace (Feb. 24) and Catch a Rising Star Comedy: Julia Scotti (Feb. 25).
Tickets range from $22 for the cheap seats at Xanadu (Feb. 17-19) to $67 for Scotti, the transgender America’s Got Talent finalist, and for Defying Gravity (Feb. 13-14), a revue of the Steven Schwartz songbook by an ensemble that includes Jason Graae and Tony winner Debbie Gravitte. (Tickets: www.OldSchoolSquare.org or 243-7922).
***
For music of a more symphonic nature, Symphonia|Boca Raton has three Connoisseur Concerts on tap in the next three months at Saint Andrew’s School’s Roberts Theater. Plus, supporters will have a chance to mix and mingle with Symphonia members at a rehearsal, luncheon, auction and performance of Paris Impressions at Via Mizner Country Club in Boca del Mar on Feb. 17. For tickets, $75, or $90 for VIP, visit www.thesymphonia.org or call 376-3848.
Kids can shed their headphones and “Meet the Orchestra” at dress rehearsals prior to each concert at Saint Andrews for free. Adults pay $5.
On March 24 at the Unitarian Universalist Fellowship on St. Andrews Boulevard, grown-ups can go behind the scenes for a rehearsal and box lunch ($35). Reservations a must.
Formal concerts are set for Feb. 19 with Alastair Willis conducting Paris Impressions, March 26 with Gerard Schwarz conducting Vienna to Appalachia, and April 23 (Holocaust Remembrance Day) with Michael Stern conducting the Florida premiere of I Will Not Remain Silent as well as Beethoven’s Symphony No. 3, Eroica.
***
It’s time for Garlic Fest, but not in Delray Beach. The “Best Stinkin’ Party in South Florida,” now known as the South Florida Garlic Fest, is moving to John Prince Park in Lake Worth Feb. 10-12.
It’s a casualty of a new Delray city policy that limits major events to one a month. The three-day event had been around for 17 years, but the Delray Beach Open tennis tournament later in the month is a year older and lasts 10 days. Lamentable loss for Delray Beach, but suburban Lake Worth hopes to make the best of it, and use the garlic to attract festivalgoers downtown.