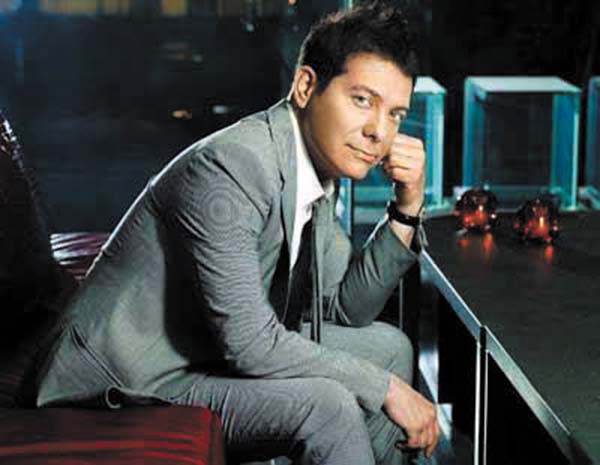 TOP: Michael Feinstein has performed each of the 25 years that the Kravis has been open. ABOVE: Jeff and Aggie Stoops attended the Kravis Center’s 25th anniversary gala performance on Feb. 11. Photos provided by Capehart

Such is the case with one of the best and one of the smallest eateries in the county. In 2009, Dak Kerprich, a veteran of the high octane restaurant wars, turned a 1950s house on Ocean Avenue just east of Walgreens into Pizzeria Oceano: five stools at the inside counter, six snug tables on the outside deck under umbrellas. So close to the street that passing cars provided a pleasant breeze.
Using only local food sources and a custom-built wood-burning oven, Kerprich fashioned some of the tastiest and most unusual pizzas anywhere. Octopus, even, on a menu that changed every day. When the food ran out, he closed. Regulars knew to arrive early.
A couple of years ago, however, Kerprich altered course, serving up Jerk Oceano, or Jerk O for short. The pizzas remained but he served up more seafood, albeit a bit more Caribbean in style. He also took a short-lived stab at a takeout only with Swell Pizza in Delray’s Pineapple Grove, but even a couple of years before that, Kerprich was searching, hoping to find a spot with a little more space, a kitchen slightly larger than 15 feet square.

That all changed a couple of months ago when Jeremy and Cindy Bearman, peripatetic New Yorkers, made an offer Kerprich couldn’t refuse. Word is that he’s enjoying the break but looking toward possibilities in West Palm Beach.
While Kerprich is gone, the name remains, in part, as Oceano Kitchen, still cash only, still with local suppliers, daily menu changes — and pizza.
The Bearmans met in a New York kitchen. Each claims solid credentials with stints in New York, San Francisco and Las Vegas, including Michelin-starred Rouge Tomate for Jeremy and ABC Kitchen for Cindy. The domed, wood-burning pizza oven remains, and Jeremy brought along his prized giant smoker from his most recent gig at One Door East in Fort Lauderdale. Recent menu offerings included an entree of pulled pork sandwich with ginger sauce, beet greens and an avocado corn salad and for dessert, lady finger banana bread with chocolate ganache, toasted graham crumbs and coffee anglaise.
***
Down in Boca Raton, the Mizner look is giving way to 1940s Rome at Louie Bossi’s Ristorante, which is set to open in late March in the new Hyatt Place Hotel at the corner of Palmetto Park Road and Federal Highway.  The restaurant, affiliated with Big Time Restaurant Group (Rocco’s Tacos, City Oyster), is the second for Bossi, who opened his first in Fort Lauderdale two years ago and plans a third in Delray Beach next year.
Just about everything is made in house — from pasta, to pizza dough to gelato, even the pancetta — and guests can choose from 300 seats in the 8,000-square-foot dining room or the 2,000-square-foot patio, decorated with a fireplace, an active bocce court and a 70-year-old Vespa, claimed to be the only one in the world with two side cars. (Not used for delivery!)
Bossi will waste no time becoming involved in the community. In his ninth year of recovery from drug and alcohol addiction, he’s spearheading  “A Taste of Recovery” June 3 at Old School Square in Delray Beach. It’s a benefit for the Crossroads Club in Delray Beach, which helped Bossi. Tickets are $40 and will offer bites and desserts from Rocco’s Tacos and City Oyster in Delray Beach, Mario’s Ocean Ave in Lantana, The Grille on Congress in Boca Raton and others.
***
Food for thought. Marilynn Wick is expanding the restaurant service at The Wick Theatre to attract diners, even when the curtain is closed. Lunch and dinner will be served Wednesday through Sunday, the kitchen under the direction of chef Marc Cela, who for 25 years topped the bill at L’Anjou in Lake Worth.
“The restaurant has been a very popular spot for pre-theater dining,” Wick said, “but now with Chef Cela’s stellar reputation, our goal is to establish Tavern at the Wick as one of the best restaurants in the area.”
***
Two performers from the 2016 Festival of the Arts Boca were up for Grammy awards Feb. 12.

No hardware for either Herb Alpert, who turns 82 March 31, or Joey Alexander, who’ll be 14 in June,

but the latter returns to Mizner Park Amphitheater March 5, this time with another youngster.
Mexican pianist Daniela Liebman turns 15 in June, but their performance will be anything but a kiddie show. The program includes classical works by Johann Strauss and Felix Mendelssohn and some jazz from conductor Constantine Kitsopoulos.
Alpert and his wife, Lani Hall, blew away the Boca Festival crowd last year. She was originally a singer with Sergio Mendes and Brasil ’66. This year on March 12 Mendes closes the festival, although the group has changed — ’66 is now 2017.
Elsewhere in the festival lineup, Grammy-winning sax man Branford Marsalis (March 3); New Yorker cartoon editor Bob Mankoff: “I Only Read It for the Cartoons: An Insider’s History of The New Yorker” (March 4); presidential historian and Time magazine editor Jon Meacham discussing “The Art of Leadership — Lessons from the American Presidency” (March 6); physicist Brian Greene: “Beyond Einstein: Space, Time and Reality” (March 7);  violinist Sarah Chang and pianist Daniel Hsu with The Symphonia (March 10); and the world premiere of the original Pink Panther with live orchestra. (www.festivaloftheartsboca.org)
***
A few hundred feet to the south, Mizner Park Cultural Center has come alive. Golda’s Balcony, the longest-running, one-woman show in Broadway history, plays March 17-19. DaVinci & Michelangelo: The Titans Experience, a multimedia tour de force, plays March 27-29. Broadway/Hollywood legend Renee Taylor examines My Life on a Diet (March 31 and April 1) and a day later Forbidden Broadway serves up two shows, followed by Robert Dubac’s The Book of Moron, April 6-9. (miznerparkculturalcenter.com)
***
Delray remains busy with nine shows set for Old School Square this month, including Lorna Luft, March 13 and 14, The Klezmatics, March 16, and Linda Lavin’s My First Farewell Concert, March 27 and 28. The month opens March 3 with Rhythmic Circus: Feet Don’t Fail Me Now! and New York City-Country band Shotgun Wedding, March 5. Classical crossover ensemble O Sole Trio goes “From Pavarotti to Pop,” March 9, and Angela LaGreca and Dick Capri offer “Catch a Rising Star Comedy,” March 10, while Shades of Bublé presents a three-man tribute to Michael Bublé, March 17-19.
A well-traveled production of Neil Simon’s Barefoot in the Park closes out the month March 24-26. Well-traveled in the truest sense, the Montana Repertory Theatre affiliated with the University of Montana in Missoula is hitting the road for its 50th season. The 44-performance tour opened at home Jan. 20, bounced around Montana for two weeks, and the Midwest for a month. Now in the Deep South for another month, including stops in Fort Lauderdale, Belle Glade and three Century Villages, it will wrap April 2 in Sandusky, Ohio. And you thought only the buffalo roamed in  Montana.
***
For the ninth year, Savor the Avenue returns to Delray Beach on March 27. Only a few spaces remain for “Florida’s longest dining table,” which stretches 1,300 feet on Atlantic Avenue between Fifth Avenue (U.S. 1) and Swinton. Four-course meals with libations will be served by 16 of the city’s top restaurants, including such veterans as 32 East and 50 Ocean and newcomers ROK:BRGR and Che!!! Menus and contact information are posted at www.downtowndelraybeach.com/SavortheAvenue; reservations must be made directly with the participating restaurants no later than March 24. Tickets range from $90-$150 depending on the restaurant. Three dollars from each meal ticket will go to the Delray Beach Public Library.
***
Brace yourself! The Boca West Foundation has found its “dream girl.”

Headlining the foundation’s annual Concert for Children, April 4, at the Boca West Amphitheater will be Oscar and Grammy winner Jennifer Hudson. Money raised from the concert and the $200,000 Charity Golf Challenge the day before plus 45,000 hours donated every year by Boca West residents provide assistance to more than 5,000 children and 24 area charities.
Hudson follows such superstars as Patti LaBelle, Jay Leno and Diana Ross. For information and tickets, $200 for the concert, with seats assigned by lottery, $600 to play golf and/or $150 for the awards presentation and cocktail party, call 488-6980 or email foundation@bocawestcc.org.

***
“I did it, but he made me do it.”
That was the defense used by Delray Beach developer Anthony Pugliese in his suit against the late

Subway founder Fred DeLuca. The six-member jury, however, concluded that Pugliese had ripped off DeLuca with phony invoices and owed DeLuca’s estate $2.9 million for a botched effort to build Destiny, a “green” city near Yeehaw Junction.
The jury rejected Pugliese’s argument that he had faked expenses because DeLuca wasn’t paying his fair share, upward of $20 billion.
The damages against Pugliese could be tripled or even quadrupled for breach of contract and other misdeeds.
With his lawyers vowing to appeal, Pugliese remained pugilistic: “I’m ready for the next fight.”