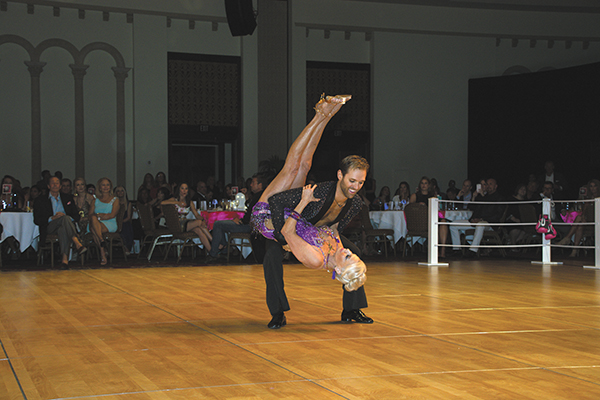 End of an era, albeit a tacky, wretchedly excessive era. Say goodbye to the big fat Botero sculptures in the yard at the not-that-old Maison de L’Amitié; say hello to the wrecking ball.

In August, the Palm Beach Town Council gave Dmitry Rybolovlev permission to demolish the 80,000-square-foot mansion, better known as the old Gosman estate, and break the 6.26 oceanfront acres at 515 N. County Road into smaller parcels.
Educated as a cardiologist, Rybolovlev made billions selling fertilizer and investing. Forbes estimated his wealth last year at $8.8 billion. In 2008, he bought the estate from Donald Trump for $95 million, according to Palm Beach County property records, although Trump, in typical fashion, claims at least $100 million changed hands. No big deal, since Rybolovlev plans to carve it into three lots, each with 150 feet of beach. With lot prices pegged in the $40 million range, it may qualify as the world’s most expensive subdivision.
The estate is one of many recent international Rybolovlev investments: the Greek island of Skorpios from Athina Onassis Roussel for $154 million; property in Hawaii owned by actor Will Smith for a mere $20 million; AS Monaco, a prominent European soccer team. His extensive art collection is world-class. He’s restoring old churches and building new ones. He’s building a new arts center in Gstaad, Switzerland.
The deals, however, were clouded for several years by threats on his life that prompted his move to Switzerland and subsequently by his divorce. Weary of his philandering, his wife, Elena, filed in Switzerland. She won a judgment of $4.5 billion with the Palm Beach estate in play, but Dmitry appealed and all parties agreed to a reduced settlement worth about $600 million.
The property was one of the first on Palm Beach’s “Millionaire’s (now Billionaire’s) Row.” Robert Dun Douglass — of the Dun & Bradstreet Duns —  erected a Tuscan villa in 1916. Utilities tycoon Harrison Williams, then the “richest man in America,” bought it in 1930. Jayne and Charles Wrightsman arrived in 1947 and had Maurice Fatio redesign the place.
Leslie Wexner (The Limited) bought it in 1985 for $10 million and tore it down, then sold the lot three years later to health care magnate Abe Gosman for $12 million.
With his health care businesses riding high, Gosman and his girlfriend, Lin Castre, built Maison de L’Amitié as much resort hotel as home, with 20-foot ceilings, marble on the floors and walls from which hung paintings by Lichtenstein and Hockney, among others, and a massive rotunda/family room lined with reproductions of legendary works of art.
Gosman became a pillar of the community, giving money to Good Samaritan Hospital, the Norton Museum of Art and HomeSafe. A $1 million gift to the Kravis Center helped build the Gosman Amphitheatre on its eastern flank.
Shortly after moving in, Gosman opened his home to 250 guests for a fundraiser for Palm Beach Opera in honor of Luciano Pavarotti, who would perform two days later at Palm Beach Jai Alai.
But within five years, Gosman’s world fell apart. Changes in federal laws and Medicare cuts crippled his nursing home investments, and a bankruptcy was nullified when a judge ruled that Lin Gosman’s previous divorce — in Mexico — was invalid.
Enter Trump in 2004 to buy the mansion at auction for a Walmart price of $41.35 million. He outbid the notorious Jeffrey Epstein and developer Mark Pulte.
Trump gutted the mansion and put it up for sale. Rybolovlev toured the property in 2006 and bought it in 2008. He never lived in it. Apparently Trump never met Rybolovlev. When questioned in July, he said his only connection to Russia was the deal with Rybolovlev, who in the mid-’90s spent nearly a year in a Russian jail on trumped-up charges of hiring an assassin.
***
Another somewhat prominent part-time Palm Beacher has a new toy.
It’s no secret that Stephen Ross chairs Related Cos., the developer of CityPlace, and owns the Miami Dolphins. His RSE Ventures owns FanVision, which allows NASCAR fans to follow their favorite drivers via cameras in the cockpit.
But an investment he made last year is even more intriguing. RSE invested $1 million, a paltry sum by Ross’ standards, in the Drone Racing League. The challenge is to attract spectators. YouTube feeds of drone races attract millions of views, but at recent events, the competitors have outnumbered spectators. Ross believes the technology of FanVision can be adapted to the darting drones and attract virtual, paying customers.
Maybe Ross could use some of the drones to search for  loose tiles that were improperly installed on the roof of the 20-story CityPlace South Tower, a $3.2 million repair job.
***
A few hundred feet to the west, The Regional in CityPlace is making big news on the restaurant scene. The latest project from Titou Hospitality, The Regional Kitchen & Public House could be a big hit, or like its predecessors, a flop. Titou has strong cred with Pistache in downtown West Palm Beach and Palm Beach Catch across the bridge and the presence of celebrity chef Lindsay Autry.
But the space is huge, 8,300 square feet, and faces Okeechobee Boulevard. Predecessors over CityPlace’s 15 years, most recently Pampas, an Argentinian steakhouse; McCormick & Schmick’s; the legendary Columbia Restaurant out of Tampa, and Angelo & Maxie’s, have enjoyed little success attracting spur-of-the-moment traffic.

Autry will blend concepts reflecting her Southern roots and some even more southerly  — the Caribbean and Mexico — plus a little French flair. Initial offerings include: grilled snapper in banana leaf with green tomato salsa verde and roasted market vegetables; cobia with ricotta gnocchi, country ham, Okeechobee mushrooms and pea greens; grilled ribeye with Seminole fried rice, grilled broccoli, toasted garlic and soy. We also hear that the pimiento cheese on club crackers is killer.
The Titou presence actually has expanded far beyond CityPlace. Six months ago, founder Thierry Beaud, a principal in Palm Beach’s legendary Au Bar, opened his second Paneterie Cafe and Bakery west of Delray Beach on Jog Road in The Shoppes at Addison Place.
It’s like a neighborhood bakery and cafe in Europe, Beaud said. Fresh croissants, panini, éclair — all fresh daily.
The man running the kitchens at both sites is Patrick Léze, who rolled his first dough four decades ago as a teenager.
***
Attention New Yorkers and all other lovers of decadent food. If you’re reading this, Junior’s first restaurant in South Florida should have opened in Boca’s Mizner Park. It’s taking over the old Ruby Tuesday’s space. Target date to begin serving its legendary cheesecake, latkes, high-rise pastrami sandwiches and steak burgers was the last week of September.
Actually, owner Alan Rosen had no choice: His dad, Walter, who ran the operation in New York, moved to Delray Beach, and he needed a place to eat.
***
At St. Andrews Episcopal Church in Lake Worth on Oct. 23, actor David Perez-Ribada and Core Ensemble (cello, piano and percussion) will perform Los Valientes, based on the lives of artist Diego Rivera, martyred Salvadoran Bishop Oscar Romero and Mexican-American folk hero Joaquin Murrieta.
A reception and an art exhibit by the children of farmworkers will follow. Jointly produced by Core Ensemble, the Norton Museum of Art and the Farmworker Coordinating Council. Admission is free. (Call 582-6609.)
***
Another Delray festival bites the dust. Faced with a doubling of city usage fees, the Bacon and Bourbon Fest will not return next March. It joins Garlic Fest, which after 18 years will move to John Prince Park in Lake Worth; the Wine and Seafood Festival, which was scheduled for Nov. 11 and 12 (its website says “postponed”). Three smaller craft fairs also will not return. City officials concluded the fees paid by as many as 16 festivals were insufficient to cover police services and sanitation. Businesses, especially restaurants, complained the festivals hurt their revenue. Residents objected to traffic jams and property damage. The city proposed raising the rate for Bacon and Bourbon Fest from $10,000 to $45,000. Based on attendance, that would require a ticket price of $30, according to Nancy Stewart-Franczak, who produces several events for the sponsoring Delray Beach Arts Inc. & Festival Management Group.
***
Good Morning America news anchor Amy Robach and actor/husband Andrew Shue headline the Boca Raton Regional Hospital’s 13th annual Go Pink Luncheon on Oct. 21 at the Boca Raton Resort & Club. The event supports the hospital’s breast cancer awareness programs and community outreach.
While having a nationally televised mammogram on GMA to promote breast cancer awareness, Robach, then 46, was diagnosed with breast cancer. A double mastectomy and chemotherapy followed. Now she passionately promotes awareness and detection. (Details at donate.brrh.com.)
***
Former American Idol judge Randy Jackson and actor Shawn Hatosy will make their first appearances at the 27th Chris Evert/Raymond James Pro-Celebrity Tennis Classic Nov. 18-20. They’ll join Evert, returning celebs Jason Biggs, Alan Thicke and David Cook and pros Martina Navratilova and Rennae Stubbs for some lively matches at Delray Beach Tennis Center and the Pro-Celebrity Gala at the Boca Raton Resort & Club. (Details at chrisevert.org.)
***
Olympics withdrawal? Well, the games may be over and the U.S. team was stunning, but one group was virtually ignored — the equestrians.
The team members, most of whom call Palm Beach County home at least part of the year, were given a passing salute for a silver medal in show jumping. But two riders from Wellington, both Olympic rookies who helped the dressage team claim bronze, were left out.
Allison Brock on Rosevelt and Kasey Perry-Glass on Dublet joined six-time Olympian and 1996 bronze medalist Steffen Peters of California and another rookie, Laura Graves of Plymouth, Fla., to produce the United States’ first dressage medal since 2004. The steady hand of Wellington resident and four-time Olympic bronze medalist Robert Dover, as chef d’equipe, didn’t hurt.
Despite being without Wellington’s Beezie Madden because of an injury to her horse Cortes ‘C’, the U.S. team pulled off a remarkable silver medal performance in show jumping. Wellington’s Kent Farrington accrued a one-point time fault; California-born Lucy Davis, who lives in the Netherlands and is a regular at the Winter Equestrian Festival, picked up four faults on the final triple jump; McLain Ward, another winter regular, jumped clear for a five-fault total. France took the gold with three faults.
Another Wellington winterer, Phillip Dutton riding Mighty Nice, took bronze in eventing. It’s the equestrian equivalent of the decathlon, as each rider and horse compete in jumping, dressage and cross country.
Though the United States won no gold medals, it and Germany were the only teams to medal in all three disciplines. Bravo! 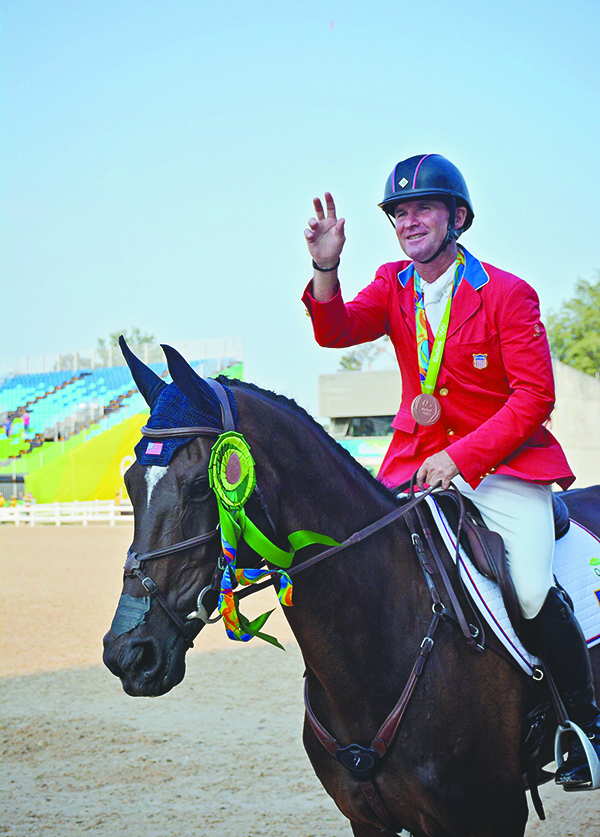