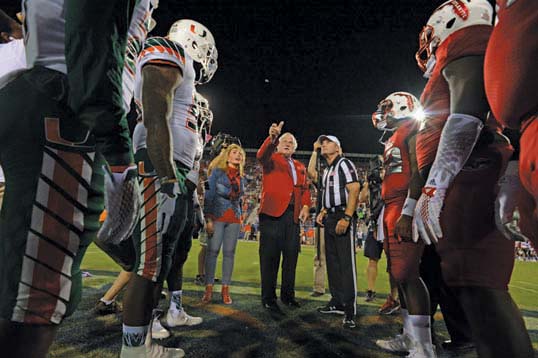 Howard Schnellenberger and his wife, Beverlee, were honored before the University of Miami  vs. Florida Atlantic University football game. Jerry Lower/The Coastal Star

As the University of Miami contingent — players, coaching staff and school administrators — took their first look at Florida Atlantic University’s stadium, they no doubt dreamed of what could be. Despite decades of football, the national championships, the stunning bowl wins, countless All-Americas, two Heismans and politically powerful alumni, they still can’t play on campus.

FAU does. With only a fledgling football program, more losses than victories, only two bowl wins and a handful of alumni in the NFL, it happened because its administration willed it, Howard Schnellenberger led the fight and the community responded. Granted, the mortgage won’t be burned anytime soon, but the stadium is there.

“Awesome! Welcome to the new Boca,” FAU athletic director Pat Chun beamed as fans poured in, eager for a showcase evening for the city, the school and the football team that was snazzily dressed in blood red Adidas uniforms.

A starry sky, a gentle breeze off the gulf stream, football legends and community bigwigs in the stands. A moving tribute to the victims, survivors and responders on 9/11, 14 years before. Schnellenberger, the legendary coach who raised Miami’s program to prominence and built FAU’s from scratch, tossed the coin.

Watching in FAU President John Kelly’s suite: Joe Namath, Schnellenberger’s most notable recruit as an assistant at Alabama. Constance Scott, former deputy mayor and now FAU’s director of local relations, drove Namath from his home in Jupiter. Former Buffalo Bill Jim Kelly came on his own, showing no weakness from his cancer battle. But the Hall of Fame quarterback, a UM legend, strolled the sidelines — high-fiving FAU players.

Miami scored a touchdown with barely five minutes gone, but when FAU answered less than two minutes later with a field goal, the evening still held promise. Then both teams left the field, as did the officials, the cheerleaders and everyone else on the sidelines.

Where? Barely a cloud in the sky. The nearest bolts were miles west in the Everglades, but FAU’s sophisticated lightning detectors beeped: The game was halted.

Fans kept their cool; beer sales boomed. Finally, at 9:47, the game resumed and FAU was on equal terms. With 5:14 gone in the third quarter, Greg Joseph’s 32-yard field goal evened the score at 20.

With one foot planted firmly on the sideline at the southeast corner of FAU’s showcase stadium, Chun pondered the action on the field and the jubilation around him, shared a couple of high-fives and headed into the bowels of the stadium.

Asked about the invisible lightning, Chun said he’d rather be safe than sorry.

What next? Triumph or chaos? FAU had been in this situation many times before. Particularly one time before these players, coaches or administrators were around — except for Schnellenberger. On Sept. 19, 2009, FAU played at the University of South Carolina, the Owl’s most formidable opponent to date. A missed extra point left the Owls a point behind at halftime.

Insiders said the halftime speech by South Carolina coach Steve Spurrier was one of his best. FAU never scored again while the Gamecocks added 21.

Miami coach Al Golden made some adjustments on Sept. 11, too. The Hurricanes won, 44-20.

Thanks to the lightning and the loss, it was a long night. The fourth quarter began two minutes after midnight. Without the lightning delay, balls still would have been flying into the next morning.

Why? TV commercials. Every change of possession. Every injury. Every timeout. Not just one 30-second spot, but two, three and sometimes more. The delays, more than anything else, took any lingering joy out of the game. It may return … once FAU learns how to win.

Big real estate deals have been commonplace in Palm Beach since the first coconuts floated ashore, but two decades ago, the island was all atwitter (before Twitter was invented) because the house at 1095 N. Ocean was put up for sale: The Kennedys were selling.

In 1995 New York investment manager John Castle and wife, Marianne, bought the Addison Mizner-designed house for $4.9 million. They bought it as a personal home, not a novelty, but the longtime Republicans appreciated its historical significance. “We do feel, to some degree, we’re protecting a legacy,” Castle once told The Palm Beach Post.

Last year, however, they put it on the market and a company identified as TGS Florida came up with $31 million. Not a bad return in 20 years.

TGS is linked to Jane Goldman, a major player in New York City real estate with Solil Management and with a portfolio reported at more than $6 billion. Her late father, Sol Goldman, was hailed as “the ultimate deal guy” who “knew the value of what he owned, knew that in many instances it was irreplaceable and had the vision to have his family own it forever.”

Nevertheless, Jane Goldman, a Romney contributor in 2012, won’t own the Kennedy furnishings. The Castles contracted with Leslie Hindman Auctioneers in West Palm Beach to put 300 items up for bid on Jan. 23. Though specifics won’t be revealed until the catalog is released in December, rumored pieces  include young Jack’s twin bed and an 18-foot dining table with 14 chairs.

On Nov. 25, the day before Thanksgiving and three days after the 52nd anniversary of the JFK assassination, Anthony Pugliese III will go to jail. Palm Beach County Circuit Court Judge Glenn Kelley will sentence him to at least six months and possibly 18, followed by 10 years probation.

That’s the deal the Gulf Stream-based developer worked out with prosecutors to settle charges that he defrauded Subway co-founder Fred DeLuca, who died from leukemia on Sept. 14.

To get the shorter term and spare his family more distress as he fights recently discovered cancer, Pugliese must reimburse DeLuca’s estate more than $1 million.

But his troubles don’t end there. Pugliese has spent a fortune on collectibles and memorabilia. In 2008, ostensibly to help finance development of Destiny, Fla., a Central Florida real estate venture with DeLuca, he offered at auction the “greatest pop culture collection ever assembled.” 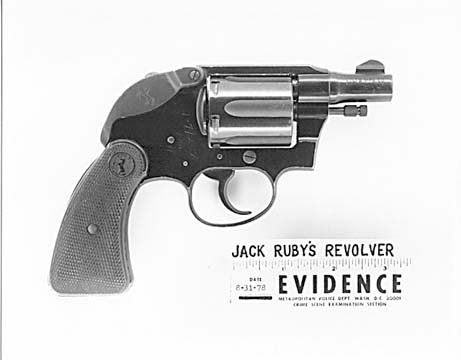 Also on the block was the Colt pistol Jack Ruby used to kill Lee Harvey Oswald. Most news reports had Pugliese selling it for upward of $1 million, but according to entries in Pugliese’s online blog in 2014, he still owns it … and, according to local reports, more than 300 other guns.

Felons, however, can’t possess guns. So what happens to Pugliese’s prized .38?

A spokesperson for the state attorney in Lee County, which prosecuted the case, said those questions will be resolved at sentencing.

Sources in the Palm Beach County State Attorney’s Office said a felon who carries a gun has a big problem and that he certainly shouldn’t have access to one, for example, in his home. The safe bet is that Pugliese sells the collection or transfers ownership to a family member, who would be wise to keep it far from him until his rights are restored.

Palm Beach hasn’t been this excited politically since JFK ran for president and it will be as long as the king of Mar-a-Lago remains a player. The Iowa presidential caucus is set for Feb. 1, New Hampshire primary on Feb. 9 and South Carolina, Feb. 20, but Donald Trump is already so busy that he left his popular Celebrity Apprentice show (for which NBC later hired former California governor Arnold Schwarzenegger).

But no matter how busy he is, The Donald always finds time for Palm Beach, and that isn’t likely to change for a little old election. More than likely, he’ll just bring the campaign with him. Even the Kennedy clan would marvel at the attention this town will receive during the upcoming social season.

Conveniently, most major Island social events are set for Mar-a-Lago. Leading off Dec. 5 is the 22nd annual Lady in Red Gala, a benefit for Leaders in Furthering Education. It was founded and is still co-chaired by Lois Pope, widow of National Enquirer Publisher Generoso Pope.

Don’t expect any bad rap for Trump at the gala, although Howie Mandel will surely offer some friendly digs, but people who service the galas expect the media to be thicker than the vultures that roost in the nearby mangroves. 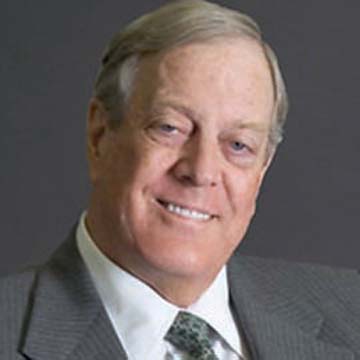 Trump isn’t the only candidate who’ll appear in Palm Beach. Guest speaker Dec. 8 at the YMCA of the Palm Beaches seventh annual Prayer Breakfast at The Breakers is another local, Dr. Ben Carson. No doubt others will visit, hoping to win votes and cash. Just up the street from Mar-a-Lago is the home of David Koch, ninth-richest person on earth, who ran for vice president as a Libertarian in 1980. Koch considers himself a social liberal, but with brother Charles has bankrolled the Tea Party.

So this year Palm Beachers will have two seasons, social and political, and for both it’ll be fun to “follow the money!”

No galas announced at Eau Palm Beach yet, but campaign followers with generous expense accounts might enjoy a couple of nights at the former Ritz-Carlton. Just entering its third year as Eau, the resort now under the Preferred Hotels & Resorts Legend banner still boasts five diamonds from AAA. Condé Nast Traveler ranks it No. 6 in the state and tops in the Palm Beaches. 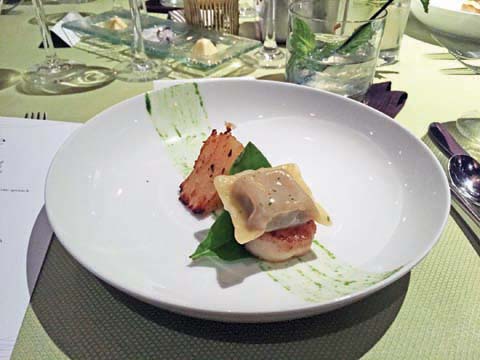 A Maine sea scallop with truffle ravioli, yucca gratin and boutique farm mollucan spinach — “simple”? Maybe to Josh it is; but diners do love the simplicity of having someone else do the work for them. 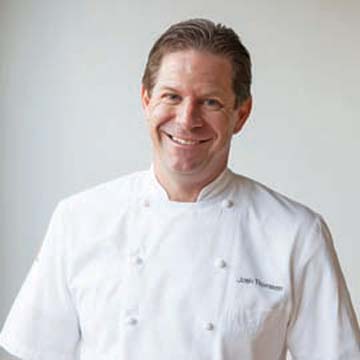 A New Jersey native, Thomsen decided in sixth grade to become a chef. Pursuing that dream, he studied at the Culinary Institute of America. Then he headed west to hone his culinary skills at several top restaurants in California, including Thomas Keller’s French Laundry in Napa. In 2010 StarChefs named him a “Rising Star.” But two years later he was lured back to Jersey as executive chef and partner at Agricola, a new “farm-to-table” concept in Princeton. The concept took off and Agricola quickly became one of the region’s top eateries.

Thomsen even found time to collaborate on an impressive Agricola cookbook, which became a swan song when he accepted Eau’s offer. “While I am sorry to see him go,” Agricola founder Jim Nawn conceded, “exciting new opportunities lie ahead for both of us. We are proud of what we have created and are grateful to have collaborated on Agricola.”

To serve as chef de cuisine, Thomsen brought along former Agricola associate Manlee Siu, whom he met in the Bay Area.

“The main thing is it’s got to be seasonal,” Thomsen said. “We work closely with Swanks (the specialty produce farm in Loxahatchee Groves). We want to stay local as much as possible.”

Eau believes in community involvement and at Thanksgiving will revive “Eau Does Giving” — a buffet in the ballroom or four-course dinner in Angle, its signature restaurant, with part of the proceeds going to the Palm Beach County Food Bank.

If it goes national, can it be “crafty”?

The reputation of Funky Buddha, a craft beer company based in Boca and brewed in Oakland Park, is spreading. Its founders, Ryan and K.C. Sentz, have caught the attention of Sierra Nevada. Originally a craft brewery in Chico, Calif., it is now the nation’s seventh largest. Sierra Nevada invited the Sentzes and four other Southeast craft brewers to its new plant in Mills River, N.C., to create a mixed pack of beers. They’ll be in Sierra’s Beer Camp Across America 2016 promotion to show “the art, spirit and attitude of American craft beer.”

Once around the block: Tastemakers, the leisurely noshing and sloshing stroll around Mizner Park, returns Oct. 13. For $30, participants buy a ticket book for a food item and a specialty drink at each of 10 dining spots.