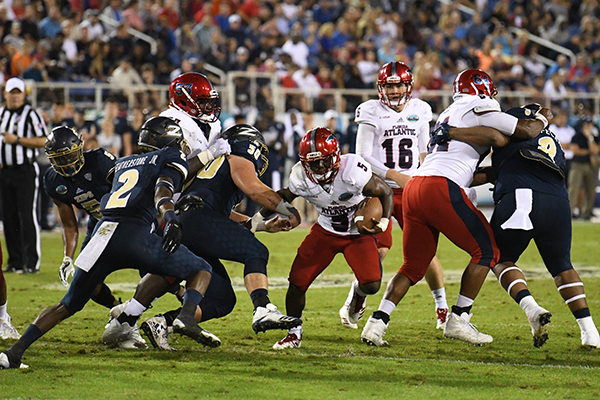 Blocking was a big part of the success of running back Devin Singletary, who ended the season with 32 touchdowns and 1,920 yards rushing. 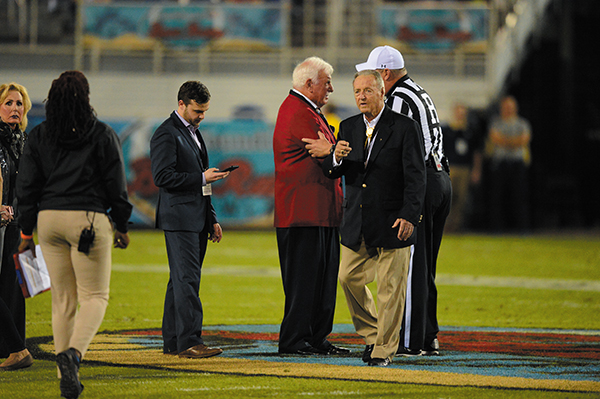 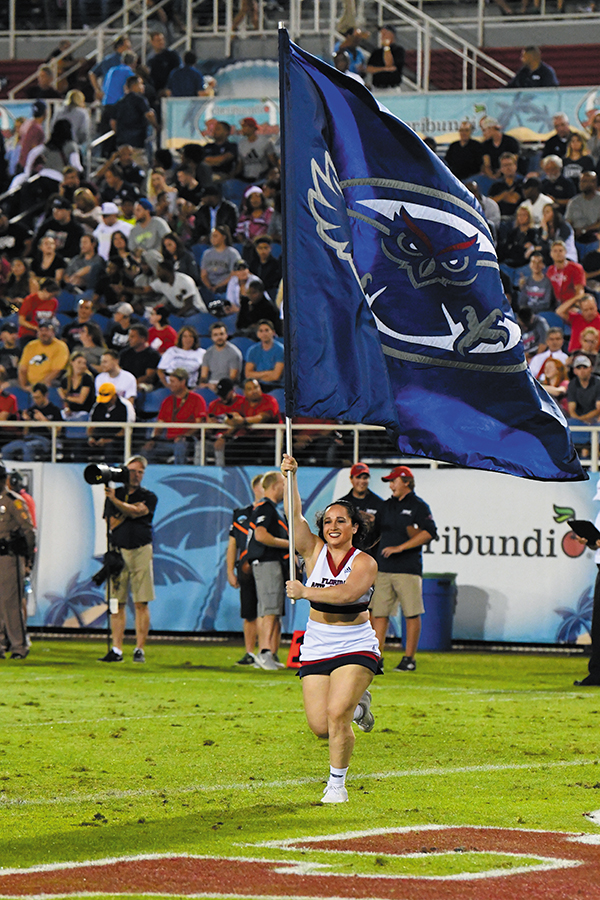 FAU cheerleaders have a tradition of running a school flag across the end zone after a score. Considering the 50-3 final, this one got quite the workout. Photos by Jerry Lower/ The Coastal Star

"Did you have to put up with what I just saw? It made me glad I’m not still coaching,” legendary FSU coach Bobby Bowden exclaimed —a slight smile on his face — in the elevator as he left the FAU stadium press box. The Akron Zips, coached by his son Terry, had been whomped, 50-3, by the hometown Owls in the Cheribundi Tart Cherry Boca Raton Bowl.
Bowden endured similar drubbings, albeit decades ago, and he knew what his son was going through. Like father like son, Terry stood tall at the postgame news conference: “That’s a butt-kicking we won’t forget.”
Gracious despite the result, the younger Bowden heaped praise on his opponent. “This is a great bowl, the perfect place for football,” he said. “Shoot, we’ve got 31 players from Florida, 11 from around here, but Florida Atlantic’s just a great place to build a program.”
Akron had quarterback Kato Nelson, who in 2015 led Broward County’s Flanagan High School to the state Class 8A championship. But FAU’s first-year coach Lane Kiffin had his team ready.
The game’s MVP, Jason Driskel, threw for 270 yards and two touchdowns and ran for 67 and two more scores. Even with the game firmly in hand, Kiffin kept many of his top players in the game, including Driskel, late into the fourth quarter, but Bowden answered simply, “It’s my job to keep down the score, not his.”
Kiffin, on the other hand, had praise for his players who rallied from only three wins last season to an 11-3 record and a 10-game winning streak. “Our defense played really well against a tough quarterback,” he said. “Our guys came out, played strong and finished that last half together. That was the best half we have ever played and they dominated.”
Before the Dec. 19 game, Kiffin was rewarded with a contract extension from five years to 10, an agreement finalized on game day by FAU President John Kelly and Board of Trustees Chairman Anthony Barbar.
Kelly, wrapping up four years at FAU, graduated from and served as a vice president at last season’s national champion Clemson. He admitted he’d like to catch the Clemson-Alabama Sugar Bowl game, but his brother hadn’t been able to find any tickets.
“I’m staying here,” Kelly said. “Besides, we’ve got a lot of work to do here.”
Many skeptics believe Kiffin would leave in a whistle-blast for an offer from a top-10 program, but he insists he’s here for the duration. Besides, he has a $2.1 million house with Intracoastal access; his dad, Monte, and brother, Chris, are both on the coaching staff.
Kiffin and ex-wife Layla, the daughter of former Florida Gators quarterback John Reaves, have three children. Kiffin even had 9-year-old Knox speak at the postgame news conference.
For those who might be curious, Cheribundi Tart Cherry juice — only “Cheribundi” was painted on the stadium grass — is not 100 percent cherry. While the original juice contains no added sugars, fillers or preservatives, it does contain concentrated apple juice — “for sweetness.” Some other products contain stevia. But deep in the pit, it’s cherry.

***
Boca Raton may not be on the same playing field as Palm Beach or even Manalapan when it comes to expensive real estate, but it’s getting there. A six-bedroom, 11-bath, 10,684-square-foot Intracoastal palace at 850 NE Fifth Ave., only nine blocks north of Palmetto Park Road, is on the market for $16.5 million. The price includes a guest cottage, theater, tennis court, cabana, pool and spa on 3.3 acres, with dockage for a 120-foot yacht. The estate was built in 1987 by commercial real estate developer Robert Muir, who died last spring.
Coldwell Banker, billing it as the “only true trophy property” in Boca Raton, initially listed it at $19.995 million, up quite a bit from its appraised tax value of $7.9 million. By comparison, an 8,700-square-foot condo on the ocean just 10 blocks away owned by pro wrestling kingpin Vince McMahon and his wife, Linda, is valued at a mere $6 million.

***
Despite living in one of the most prosperous regions in the nation, more than 400,000 Palm Beach County residents live in poverty. Every month the Palm Beach County Food Bank serves more than 100,000 individuals through food pantries, soup kitchens and other services. But that food doesn’t come for free, and the money to buy it comes from a wide variety of activities and programs.
On Dec. 3 nearly 1,000 supporters gathered at Old School Square for the second year of Empty Bowls Delray Beach. For $25 each, they enjoyed a basic meal of soup and bread. The offerings, from more than 30 local restaurants, bakeries and providers, were anything but simple, ranging from chicken vegetable, split pea and potato bacon to red seafood chowder and coconut curry.
Proceeds from tickets and sales of bowls go to the Food Bank. The bowls were decorated by students from American Heritage, St. Joseph’s Episcopal, Gulf Stream and Pine Crest schools, Palm Beach State College and FAU, as well as Art-Sea Living and the Coral Lakes Pottery Club. 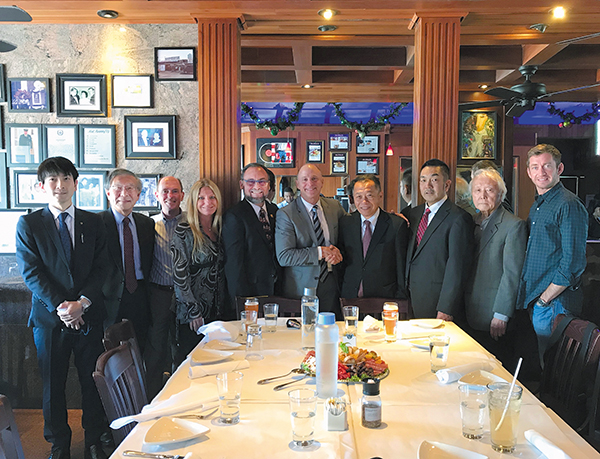 In the first decade of the 20th century, a group of ambitious young men from Miyazu, Japan, arrived in Boca Raton to farm pineapple. Unfortunately for the Yamato Colony, their hopes were dashed by pineapple blight, cheaper Cuban fruit and ultimately World War II, when the Army took most of their land to build Boca’s air base.
George Morikami, however, remained … and prevailed. He continued to farm his own land and as the war wound down, bought more. Two decades later, he offered the land to the people of Delray Beach and Palm Beach County for a park. At first, Delray Beach rejected the offer, but it was finally accepted in 1973, and four years later the Morikami Museum and Japanese Gardens opened.
To celebrate the Morikami’s 40th anniversary, Mayor Shoji Inoue paid an official visit to Delray Beach — his third — with a small delegation from Miyazu.
He was joined by Kazuaki Ida, grand-nephew of George Morikami, and Japan’s consul-general from Miami for a short visit. It included stops at City Hall, the tennis center and the Chamber of Commerce, where the discussion involved possible business exchange, and a reception at the Cornell Museum.
The visit included lunch at Caffe Luna Rosa with Mayor Cary Glickstein and former Mayor David Schmidt, who is president of Sister Cities of Delray Beach. “They have a lot of the same issues that we do,” Schmidt said.
As part of the Sister Cities program, next summer seven students from Atlantic High School will visit Miyazu, which sent seven students to Delray in October.

***
Boca-born Funky Buddha, the largest craft beer producer in South Florida, has been sold. The buyer, Constellation Brands, controls a hundred or so brewer brands, including Corona and Modelo and at least one other craft brew, San Diego-based Ballast Point.
No word on the sale price, but Buddha is now brewed in Oakland Park by a workforce of 130 that produced an estimated 35,000

barrels of beer in 2017. That’s just a few more bubbles in the Constellation stein (9,000-plus employees, 20 million barrels).
The good news is Ryan Sentz, Funky Buddha’s president and head brewer, and brother K.C. Sentz will continue to run the Buddha. Constellation’s move pales in comparison with those of Anheuser-Busch InBev. The maker of Bud, Stella Artois and Busch (is that really a beer?) has bought 10 craft brewers since 2011 and has indirect interest in four others.
In Tampa, Florida’s craft beer capital, Cigar City is the craft beer king. But in 2016 Oskar Blues, a Colorado-based craft brewery, bought controlling interest in Cigar City for $60 million while forming Canarchy, which calls itself  “a disruptive collective of independent brewers dedicated to bringing innovative flavors to beer drinkers in the name of craft.”

***
Meanwhile, craft brew fans who prefer to drink and not drive have a new choice — the Damn Good Beer Bus. Patrons have two options: The “public tour” ($59) offers north, central and South County tours of three breweries each plus four samples at each, behind-the-scenes tours and chats with brewery representatives.
A Sunday “Brew Loop” shuttle ($5 for unlimited rides) stops at Boynton Beach’s Copperpoint, Nobo, Due South and Devour at least four times (damngoodbeerbus.com).

***
With its new promotion, Ocean One, near the Intracoastal in Delray Beach, may need a beer bus to prevent DUIs. All drinks, all day are three-for-one. Three Cuervo Golds for $10; three Kahluas or Jack Daniels for $12; three Grand Marniers, Grey Gooses or Jamesons for $14. And all beers — domestic, imported or draft — $3.

***
With the likes of two-time Tony winners Brian Stokes Mitchell and Chita Rivera, the Kravis Center’s annual “Night of Stars” on Jan. 12 promises to be one of the best. With the recent addition to the bill of Angela Lansbury, it could become one for the ages. Tickets start at $50 (651-4320).