Just in time for summer blockbusters, the Cinemark Palace 20 and XD in Boca Raton has revamped, and opened the Movie Bistro on its premier level to slake the beer and cocktail thirst of moviegoers.

Open for both lunch and dinner, as well as a happy hour and après theater desserts, the open-floor restaurant has a full-service bar, tables and high-tops, and an adult arcade. It's a public restaurant — no movie ticket required, though it becomes 18-and-older after 5 p.m. for happy hour.

The theater took over the former Bogart’s Bar & Grill, operated by Burt Rapoport of Deck 84 and Henry’s fame, in late 2016.

The redesign of the 249-seat eatery complements the six premier-level theaters, where moviegoers get free small popcorn, free valet parking and tables at their seats for dining and drinking during the movie.

Also new is the VIP screening room, available for private rental with 29 reclining seats and in-seat call buttons for the wait staff.

The new adult game room has billiard tables, a shuffleboard table, and two foosball games; game tables are also set around the bar.

Other theatergoers will have the option of alcoholic beverages at the main concession stand, which also has expanded food offerings.

The Cinemark Palace 20 was the benchmark for new theater offerings when it opened as a Muvico in the summer of 2000. It changed hands to Cinemark in 2009. 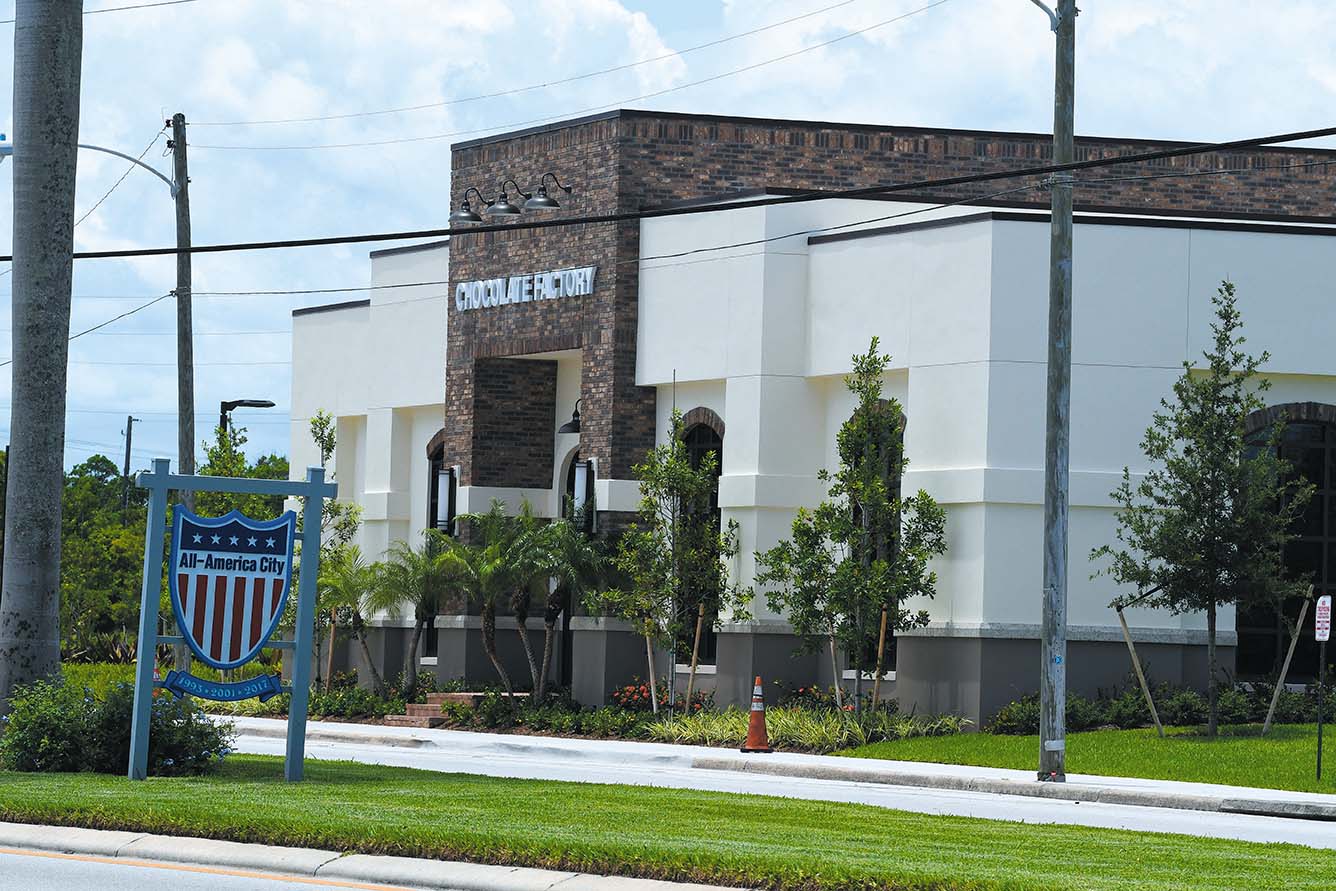 The building that will house Tyler Levitetz’s 5150 Chocolate on southbound Federal Highway in Delray Beach is on the former site of the Waffle House. Jerry Lower/The Coastal Star

The huge building touting “Chocolate Factory” on U.S. 1 in Delray Beach has been in the works for months. A little digging produced some answers about the “coming soon” spot.

Tyler Levitetz, a chocolatier with fine chocolate-making experience, is behind the “bean to bar” place called 5150 Chocolate. His cred comes from working with nationally recognized chocolatier Norman Love Confections on the west coast of Florida.
At some point, he decided to go deep into the chocolate process and make it from the raw cacao beans.

Making chocolate from scratch — that is, sourcing and roasting cacao beans, then grinding and cooking them into edible chocolate — is the candymaking world’s elaborate answer to roasting single-source coffee beans.

Difference in taste is incomparable to the homogenized variety most chocolate is turned into. Subtleties from the cacao beans give depth and complexity to the flavor.

But it’s an intricate process — and why most chocolatiers just buy the finished product to form their fancy chocolates sold retail.

Hence Levitetz’s shop name, 5150 Chocolate. Levitetz writes on his website that it represents the cop code for a mentally ill person on site. He laughs off friends’ observations that he’s conducting a mad-scientist type experiment.

Trials with varieties like a malted milk bar, a Vietnamese lemongrass and an organic Nicaraguan cacao bean are typical of his direction.

No word on when the factory will open, or how the chocolate will be retailed.

Mark Militello, a James Beard award-winning chef, has returned to Josie’s in Boynton Beach, bringing with him menu creations and his unique resources for the kitchen.

“I’m getting the most beautiful mushrooms you’ve ever seen from The Mushroom Guy in Fort Pierce,” he said.

A new restaurant concept from Militello and the owners of Josie’s is in the works, he said, but he is keeping the plans close so far. No location or date has been leaked.

In brief: Congrats, all you grads out there. To honor the future classes of 20-something, Boston’s on the Beach is saluting students with a free meal. The “Make the Grade” deal is this: Kids who bring in a report card eat free with a grown-up ordering a meal. Straight-A students get a T-shirt. The deal runs through June. More info at www.bostonsonthebeach.com. ...

June 2 sees the return of the Taste of Recovery at Old School Square in Delray Beach, hosted by Louie Bossi of the namesake restaurant. A variety of top area restaurants serve tastings, but don’t look for alcohol at the event. Cost is $40 and benefits the Crossroads Club in Delray Beach; go to tasteofrecovery.com for info.

Tags: cinemark, around town, column
E-mail me when people leave their comments –
Follow