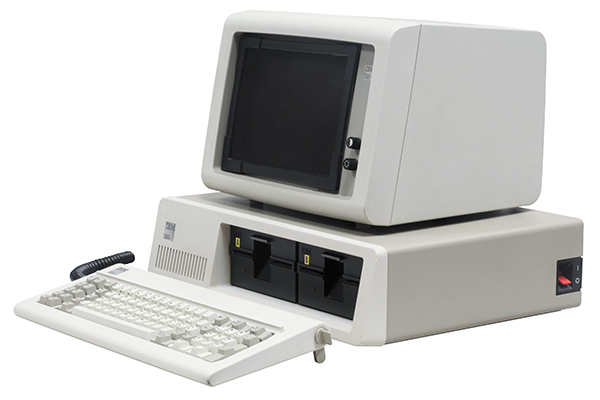 ABOVE:  During IBM’s heyday in Boca Raton, more than 10,000 employees designed and manufactured the world’s first personal computers. BELOW: Most residents who were not employed with the company never got close enough to appreciate the architecture of the facility. 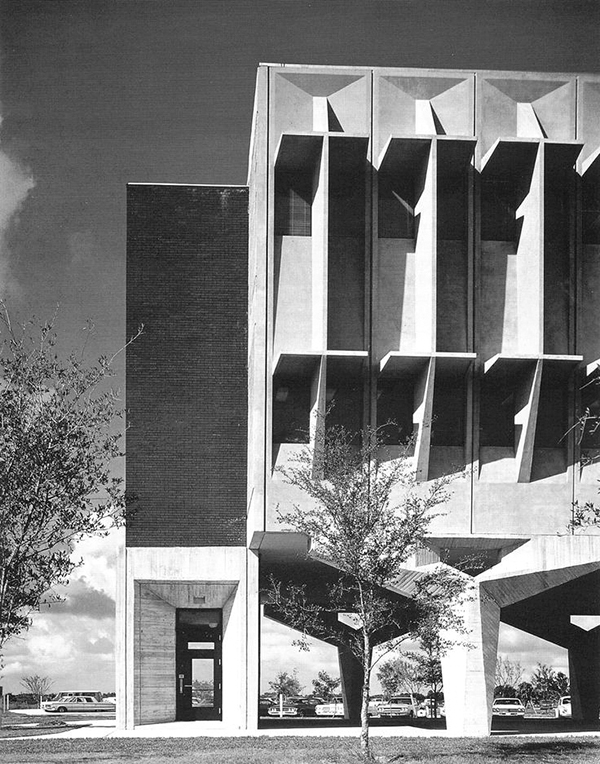 In the mid-1960s, sleepy Boca Raton was waking up. It finally had a hospital; it had a tourist attraction, Africa USA; the Boca Raton Resort and Club was bustling; visionary businessmen had persuaded the state to turn the old Army Air Force base into Florida Atlantic University and assorted business ventures.
The resort was owned by Arvida, the company founded by millionaire Arthur Vining Davis. Arvida controlled much of the real estate in and around what was yet to become a city and was pushing development of large parcels that now are home to University Park, Town Center and Boca West.
In 1965, two men walked into Arvida’s Miami offices and asked if property promoted in a 3-year-old sales brochure was still available. Only after the Arvida executives pledged total secrecy did the men identify their client, and even as negotiations continued, the buyer was not revealed — not even to Arvida’s board of directors.
Nevertheless, the deal was approved: 550 acres in the boondocks (west of what is now I-95 and south of what is now Yamato Road) for $1.4 million, about $2,500 an acre.
In December 1966, the purchase was announced by the buyer — IBM. A few months later, IBM Chairman Thomas Watson Jr. revealed the company’s plan, a manufacturing plant.

Designed by international architects Marcel Breuer and Robert Gatje, the original site grew from 620,000 square feet to a peak of 3.6 million with 10,000 employees in more than 40 buildings.
Although the formal dedication wouldn’t be held until March 1970, 400 employees began producing small main-frame computers in leased space in October 1967. Fourteen years later the first PCs began to roll off the assembly line and history was made.
Half a century later, IBM has moved most of the projects from the Boca Raton operation to other sites, but this month the city will salute its 50th anniversary in Boca Raton with two events.
On Oct. 14, a 50th anniversary celebration featuring displays and speakers will be held at the Boca Raton Innovation Campus (the former IBM site) at 5000 T-Rex Ave. from 8:30 a.m. to 2 p.m. Lunch and tours will be provided, but guests must RSVP at www.ibmsfqccaa.org/50th.htm.
From 5-8 p.m. on Oct. 19, the Boca Raton History Museum (71 N. Federal Highway) will host an IBM birthday party, with a display of vintage computers and the inventors who created them, plus birthday cake. Reservations required at 395-6766, Ext. 301.
Why Boca Raton? One entirely plausible story claims an IBM vice president who had a second residence nearby, possibly Palm Beach, made the suggestion. IBM retiree Pete Martinez cites several factors: The company preferred to place plants where the distractions of large cities could be avoided and employees could be part of the IBM “family” but they still had access to shopping, transportation, good schools and health care. Boca Raton certainly offered all that.
“Employees were considered employees for life,” said Martinez, a native of Cuba who came to the United States in the early ’60s, joined IBM in 1975 after graduating from the University of Miami and retired as a senior executive. “Florida was clearly growing. They always considered the proximity of talent. The space program was a tremendous source; a lot of my fellow employees came from the Cape. Boca Hospital was important. But the decision has always been, ‘Where’s the talent?’”
***
Not far away, on Military Trail just north of Yamato, Park Place is the newest destination shopping center with Boca foodies in mind — with a Habit burger joint, Chipotle, Phenomenom nitrogen-chilled ice cream and a Fresh Market. It did have a Rappy’s Deli, but founder Burt Rapoport reconfigured it as Park Place Deli, which soon will be replaced by a throwback. Rapoport and old partner Dennis Max are bringing back Prezzo, an Italian concept from the late ’80s.
The original Prezzo was in West Boca in a small center just opposite the turnpike entrance at Glades Road. Running the kitchen was a promising young chef named Angelo Elia, who moved on to national prominence with outlets in Fort Lauderdale, Boca Raton and Delray Beach.
No Elia this time, but the new chef is no stranger to South Florida.
Before he ventured into Boca Raton, Dennis Max made his mark at Café Max in Pompano Beach with another promising chef in his kitchen: Mark Militello became a charter member of South Florida’s legendary “Mango Gang” that put “Floribbean” cuisine on

the culinary map.
Militello made the rounds, opening restaurants in Fort Lauderdale, South Beach, West Palm Beach, Mark’s at Mizner Park and The Office in Delray Beach. He also took up consulting, and after a hitch on Long Island found his way to a town not especially regarded for its cuisine — Boynton Beach.
Steve Setticasi, who has owned Josie’s in Riverwalk Plaza just west of the Intracoastal since the early ’90s, hired Militello as a part-time consultant to help transform the restaurant into a dining destination and mentor his son, Sebastiano, the chef de cuisine. Militello, however, soon found an apron and was working alongside Sebastiano, not looking over his shoulder.
Sebastiano will be on his own now. “Mark is now full time with us,” Rapoport said. “It’s a blast working on the menu with him and Dennis.
“Prezzo is exciting! Should open the end of November. It’s gonna be cool!”
***
Brewzzi is history. After two decades, the prize-winning microbrewery and restaurant in Boca’s Glades Plaza has been sold. The bright brass brewing tanks reportedly are history, to be replaced by a private dining room, although the reputed buyer specializes in brew pubs. A name mentioned in the transaction is Eric Clark, who once was involved at Deck 84, one of Burt Rapoport’s restaurants.
***
Kevin Scully had a takeout kitchen in his old market, but he’d never run a restaurant, until he opened the appropriately named Scully’s 15 years ago on South Federal in Boynton Beach. His plan was simple: Hang on until he turned 62, when he would be eligible for Social Security.
“That was always the goal,” Scully said. “I’m 100 percent in the clear and sold it 15 years to the day from when I opened. Still it took five years to sell the place. I had a lot of buyers and close calls, but it all worked out. Every single employee still has his/her job. And I’m sure the new guy will do it better than me.”
The new guy is young, 31, but Jimmy Everett, who bused tables at Atlantis Country Club as a teenager before entering Culinary Institute of America, has been refining his craft from New York to Hong Kong. Most recently he was chef de cuisine at Valentino Cucina Italiana in Fort Lauderdale. 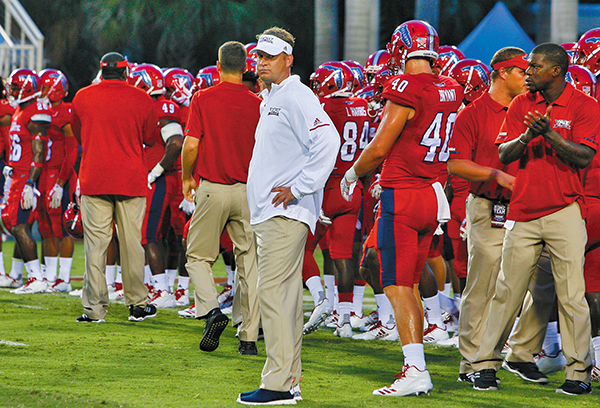 It’s still early. Lane Kiffin may be a coaching genius, but patience has to be the key word for FAU football, where the new coach didn’t see a win until the third game of the season.
The Owls opened with losses to two top teams, 42-19 against Navy, a 2016 bowl team, and 31-14 at ninth-ranked Wisconsin. They finally showed some potential with a 45-0 win against Bethune-Cookman, only to follow up with a close 34-31 loss at Buffalo.
The future? If the first few weeks are any indicator, they’re in for a wacky season. Most of the 28,481 fans, third-largest home crowd in school history, had left before the Navy game finally wrapped just before 2 a.m. thanks to three lightning delays.
“We were bunkered down,” Kiffin said when asked if he considered abandoning the game early. “We were staying for the long haul. That’s just how our program is. That’s how we want our players to think.”
Still, Kiffin admitted, “We’ve got a lot of work to do.”
The next week, Irma made an impact, distracting the Owls before their game at Wisconsin and forcing them to remain in Madison until the following Wednesday. FAU took out a full-page ad in The Wisconsin State Journal to thank the Badgers for their hospitality.
The following weekend, FAU finally hit the win column against Bethune-Cookman before an Irma-reduced crowd of 16,743 at FAU Stadium.
Kiffin didn’t come to FAU without baggage accumulated at colleges and with NFL teams, but Athletic Director Pat Chun remains patient. He’s been pleased with the home attendance and community involvement. As for the team, he will give Kiffin time. After all, previous coaches have been kept around at least three years, and the present schedule gave the Owls four games to settle in before beginning their Conference USA schedule.
***
One day Greenland could be green — or more likely brown. Possibly sooner than we think if global warming continues its wretched pace. Justin Brice Guariglia knows firsthand and he’ll make his case at 3 p.m. Oct. 8, not at a scientific symposium but at the Norton Museum of Art.
Guariglia’s appearance and exhibit “Earth Works: Mapping the Anthropocene,” originally scheduled for Sept. 7, was postponed by Hurricane Irma.
A professional photographer based in New York, Guariglia made a series of flights with NASA scientists in 2015 and 2016 to photograph Greenland’s icy terrain. Those photos, some room sized, offer persuasive evidence that surface ice is disappearing.  Admission is free.
***
With “men, dating, love, sex, relationships, plastic surgery, friendship, female jealousy, money, celebrity and more” on the table Oct. 11, Bravo channel’s “real” New Jersey housewives Siggy Flicker and Dolores Catania and host “Becky in Boca” should have plenty of dish at the first show of the season at Boca’s Mizner Park Cultural Center.
Thom Smith is a freelance writer. Reach him at thomsmith@ymail.com.