Glen Calder was in on the act, but he just wasn’t sure how. Wife Kristin was competing in the annual Boca Ballroom Battle, so in support of the cause — the George Snow Scholarship Fund — he agreed to play a role in her dance number.
The theme was movies,  and each of the eight dancers assumed the identity of a film star or character for an opening intro and then an actual dance number. A former Boca Raton deputy mayor and health care executive, Peter Baronoff, for example, assumed the role of Mrs. Doubtfire. Boca YMCA boss Dick Pollock recreated the dance scene from Pulp Fiction. Local activist Beth Osborne pulled an Austin Powers. 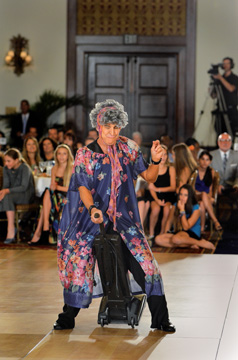 Peter Baronoff did his best ‘Mrs Doubtfire’ imitation and set a record for fundraising. 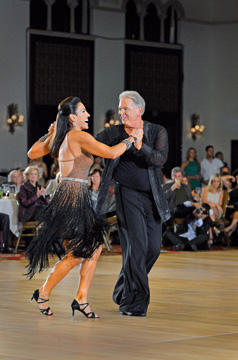 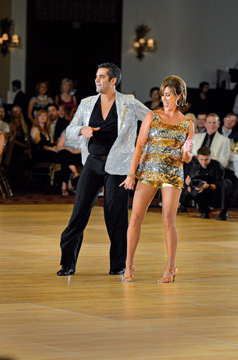 Beth Osborne was honored for best female fundraiser and dancer for her ‘Austin Powers’-like moves.

For the Calders’ act, Glen knew only that he was to sit on a chair on the dance floor. The music started and Kristin, head of public relations for the Bethesda Hospital Foundation and mother of three, strutted out in a fur coat, which she removed to reveal a swirling dress, straight out of The Seven-Year Itch.  Then doing her best Marilyn Monroe, she sang “Happy Birthday, Mr. President,” to her stunned but grinning husband.
Calder and her partner, Fred Astaire Studio dance director Jay Molter, then segued into their “real” dance to Diamonds Are a Girl’s Best Friend.
“When I see the photos I can’t believe it’s me out there,” Calder said. “When they asked me to participate, I was pregnant and thought this would be a good way to get back in shape. But to learn the choreography and pretending to be Marilyn Monroe was as mentally challenging as it was physical. It’s a very emotional experience as well. Most of us wouldn’t get out there if it wasn’t for a cause.”
Calder didn’t win. The mirrored ball trophies for best dance went to Pollock and Osborne, who also took the top fundraising prize with Baronoff. But no regrets, as the event raised $290,000 for college scholarships. 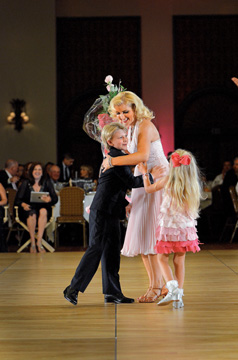 Kristin Calder was greeted with flowers by her children, Harrison and Caroline, after channeling Marilyn Monroe.

“It gets better every year, the talent of the dancers and what people put into it,” she said. “When I look at the pictures and see all the people smiling and having such a great time, it was worth it. And for a few minutes, I was Marilyn Monroe. That was great. I’m sure it will be a part of my life for some time to come.” 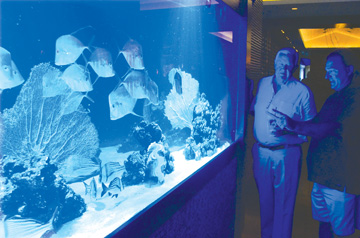 Visitors to the Seagate Hotel and Spa visit the hotel’s new shark tank (above), which has three small sharks (below). Thom Smith is a freelance writer. Find him at thomsmith@ymail.com.