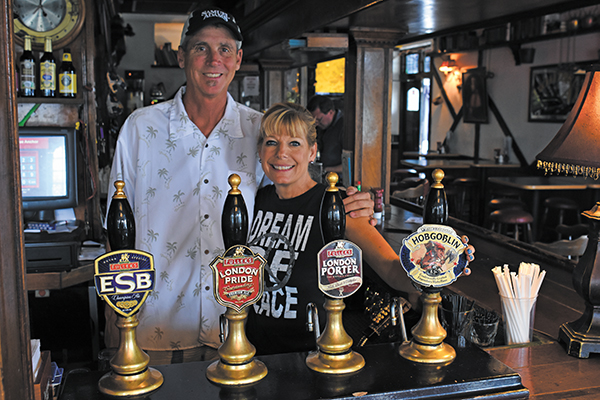 Mark and Peggy Snyder have taken over the taps at the Blue Anchor. Jerry Lower/The Coastal Star

Around the first of the year, word began to circulate that Blue Anchor, Delray Beach’s venerable English-style pub, was on the market. After delivering thousands of  pints, bangers and mash and fish and chips for more than two decades, founder Lee Harrison was going fishing. But before he could cast a line on the Withlacoochee River in the Central Florida town of Lake

Panasoffkee, population 3,551, he had to hook a buyer. Didn’t take long.
On April 11, Lee signed out. But not to worry.
“The old girl is in good hands,” Harrison quipped on Facebook, referring to new owners Mark and Peggy Snyder. “Please make them welcome, my friends. I loved my 21 years at the helm and will no doubt be popping in from time to time.”
After decades in the tabloid news business, England-born Harrison was just looking to buy a place where he could watch soccer on TV when he and a partner came across the vacant building at 804 E. Atlantic Ave. Little did he know Blue Anchor would provide the foundation for what would become the Atlantic Avenue restaurant explosion.
“Blue Anchor is where we would go to work over our plans,” said Butch Johnson, who would meet his partners there to formulate plans for 32 East.
Midwesterners by birth, the Snyders hit Delray about six years ago after a long stint in Texas. Mark has been in the restaurant business for about 35 years, mostly with chains such as TGI Fridays and Hurricane Grill & Wings. Their three daughters, two in college and one beyond, want their parents to stay put.
“They want a place to come home to, a place to bring their children when they get a chance and said Delray was the place,” Peggy said as she tended bar and rang up tabs at a recent happy hour.
The veteran staff remains behind the bar and in the kitchen, and international soccer, a Blue Anchor TV tradition from the Harrison era, remains a staple. But as a veteran of visits to the Masters and U.S. Open, Mark may tune one screen to golf.
***
Coming May 8: Green Owl, second edition.
A popular breakfast and lunch spot since 1983, the Owl was one of five Atlantic Avenue businesses in the 300 block to close last summer as new owners began raising rents. Owl owner Dave Gensman considered looking for a new perch off the avenue, but building owner Menin Development, which also owns the old Huber’s Pharmacy space at 400 E. Atlantic, had other ideas.
“We are not only real estate developers and owners, but also corporate and personal residents of Delray,” Menin Executive VP Marc Yavinsky said in a Facebook statement. “With all of the change coming to the avenue and to downtown Delray, we think it is important for the community to recognize and preserve longtime institutions such as the Green Owl and are proud we are able to do so.”
So Gensman is crossing the street to a modernized Owl: “We are looking forward to a new, updated restaurant while maintaining the charm of the Owl. I would like to thank Marc Yavinsky and Menin Development for understanding the importance of having a place like the Owl in Delray.”
***
Meanwhile, farther down in Boca Raton, Louie Bossi’s is heating up. After a trial run beginning May 1, the 300-seat restaurant in Hyatt Place goes full tilt May 10 with lunch and dinner. Bossi’s No. 2 (the original is in Fort Lauderdale) is the latest iteration from Big Time Restaurant Group (Big City Tavern, Grease Burger, Rocco’s Taco, City Oyster and City Cellar). It’s Italian, everything made from scratch and the first local eatery with a bocce court.
A few months down the road, Big Time intends to bring Bossi to 44 E. Atlantic in Delray. The first floor of the former Masonic Lodge was most recently occupied by Cafe Bleu, a coffee shop. Lots of renovations in the works. (Where will they squeeze in the bocce court?)
Some folks will say great; some will say there goes the neighborhood. On the north side of Atlantic and a few yards east, in the space vacated two years ago by Ginger Boutique next door to Sazio restaurant, Tommy Bahama has opened. The question remains: Will mom-and-pops be able to stay afloat as landlords raise rents?
***
Avenuers who aren’t happy with the new directions can always head up Dixie, almost to Boynton Beach, to take out their frustrations in the ring. The new Delray Beach Boxing promises everything but commentary by Howard Cosell. Primarily a fitness center, it also features a 24-foot-square ring for sparring and the occasional competitive match, and “ringside seats” at a well-stocked bar, plus a genuine red phone booth from London where guests can place orders through Delivery Dudes. Could this be the new Delray? Check back in 10 years.
***
Just up Federal in Boynton Beach, Las Ventanas, the mixed-use complex at the corner of Woolbright and Federal, is jumping. New owner Pollack Shores is giving the property a new paint job and other fixes for residents … and its new tenant.
Baciami Italiano, the latest project from the Pellegrinos — Steve Sr. and Steve Jr. — opened in mid-April, offering true Italian hospitality and authentic dishes from a wood-burning brick oven overseen by Executive Chef Anthony Ianniello. No strangers to the area, the Pellegrinos are the guys behind Prime and Il Bacio in Delray Beach.
***
At the Four Seasons  in Palm Beach, a Florida Department of Business & Professional Regulation inspector discovered 13 live roaches in the kitchen during a routine visit in mid-April. Thirteen is not a high number, but impeccable food service has always been a major draw at the resort.
Adding insult to injury, the inspectors also found several cases of food stored at improper temperatures and in unapproved locations.
The violations forced closure of the main kitchen until the no-nos were corrected a few hours later.
“The health and well-being of our guests and employees is always our top priority,” resort spokeswoman Laurie Herrick said. “We do take these matters very seriously.”

***
Proving ’em wrong, one snap at a time.
Sharrod Neasman was a pretty good high school football player in Palmetto, Fla., but not good enough to earn a college offer.

He worked two jobs, at FedEx and PacSun, for two years before enrolling at Florida Atlantic on his own dime and earning a spot on the team. Despite sustaining a knee injury in his sophomore year, he finally received a scholarship and so impressed coaches and teammates that he was named defensive captain in his senior year.

Neasman left FAU in 2016 with a degree, not in police science or sports marketing, but in mechanical engineering. Pro football? Chances looked slim — FAU had a poor record, and he wasn’t physically imposing for a defensive back. No team drafted him.

Undeterred, he arranged a tryout with the Atlanta Falcons.
They cut him, then called him back five days later to work on the practice squad. Five weeks later he was on the roster. Five months later, Sharrod Neasman, No. 20, became the first FAU alumnus to play in the Super Bowl.
Unfortunately for Atlanta, New England staged the greatest comeback in Super Bowl history, and on the more than 90 snaps for Atlanta’s weary defense, Neasman was on the field for only three.
Now the Falcons are evaluating personnel; news reports say one starting safety is looking elsewhere and coaches are looking for a new safety with more speed.
But don’t count Neasman out. He has traveled this road before. An April 1 announcement and YouTube video drew national attention to FAU. ABOVE: A student brings her pig to computer lab as part of the ‘animal-friendly’ university the video touted. Photo provided

Speaking of FAU, an announcement and YouTube video on April 1 attracted nationwide attention as the school announced its new role as an “animal-friendly” university.
“Many universities have a pet-friendly campus,” President John Kelly declared as he walked one of his three rescue dogs. “Our intention is to be unique and offer an animal-friendly campus.”
Cut to psychology professor Lauren Mavica with her pet dachshund; a student at a computer terminal, pet pig in lap; another student with a saddled show-jumper. The video announced that Fido fountains, waste disposal systems and litter boxes would appear on campus this summer, plus a student-pet joint grooming program in the campus barber shop and a staff veterinarian.
But don’t look for show jumpers in the quad or pet owls perched atop computer monitors.
Consider the date.
“I am unaware of any reports that anyone took the video seriously,” FAU spokeswoman Brittany Sullivan said, adding that it was received in good humor. Produced by the campus video team, it drew mention in Time magazine and The Washington Post’s list of April fool schemes.

Maybe it wouldn’t hurt Donald Trump to forgo a round of golf in favor of an audience with students in the Leon Charney Diplomacy Program at FAU. POTUS might pick up a tip or two about diplomacy and foreign affairs.
In April, among 5,500 students from 350 universities gathered at the National Model United Nations competition in New York, the program received the Distinguished Delegation Award. Since its founding in 1996, the diplomacy program of FAU’s Peace, Justice and Human Rights Initiative has trained students in world affairs, dispute resolution and debate. The U.N. award was the program’s 19th for national and international academic excellence.
Two weeks after the New York event, FAU announced that the diplomacy program had been renamed for Charney and would be bolstered by a $1 million grant from the Charney family.
A resident of New York, Tel Aviv and Boca Raton who died a year ago, Charney was quite the character — lawyer, writer, broadcaster, Manhattan real estate mogul, self-made billionaire and occasional cantor. But his greatest work was done behind the scenes.
At the behest of President Jimmy Carter and Israeli Defense Minister Ezer Weizman, Charney provided a backdoor channel that allowed Israel and Egypt to cobble together the document that led to the 1978 Camp David Accords.
“I never acted on behalf of anybody,” Charney once said. “I acted on behalf of peace.”
***
The Kravis Center may still be churning out hot shows in its 25th anniversary year, but it’s already looking forward to the next season. Hailed as “sparkling, fresh and lively,” The Sound of Music runs May 9-14, after which the music turns a bit bawdy with Monty Python’s Spamalot from May 19 to June 4. TV pundit Trevor Noah visits June 3, the Gipsy Kings on June 11, and Tracee Ellis Ross’ mom, the up-and-coming singer Diana Ross, June 24.
But fall and winter don’t look so bad either: La Cage aux Folles, Oct. 6-22; 2017 Rock Hall of Famer Yes, featuring old-timers Jon Anderson, Rick Wakeman and Trevor Rabin (no Chris Squire or Steve Howe, et al, but Yes, nonetheless), Oct. 13, and the Israel Philharmonic with Zubin Mehta, Nov. 4.
***
Five years ago this month in Naples, the world lost an incredible voice. Fortunately for us, a trove of Donna Summer’s music remains, as does the one individual closest to her — Mary Gaines Bernard, her backup singer for 35 years who happens to be her sister.
On New Year’s Eve 2015 at Crest Theatre in Delray Beach, Mary launched Donna Summer, A Musical Journey. It was so well received that she’ll return, this time outside in the Old School Square Pavilion, May 28.
Disco digs, tuxes or jeans, Afros or dreads, dancing shoes or sneakers — they all fit. (www.oldschool.org or 243-7922.)