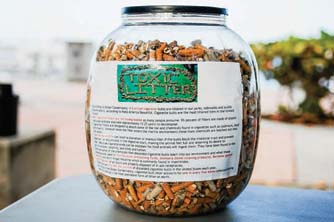 Proposals to allow local governments to ban smoking on beaches — one from a Boca Raton state representative — are making their way through the Florida Legislature.

State Rep. Bill Hager introduced a bill in the Florida House on Jan. 22. A committee on Feb. 21 unanimously passed a Senate version of the measure, 10-0.

Hager was encouraged by the vote of the Regulated Industries committee on SB 258, by state Sen. Rob Bradley of Orange Park.

“I was very pleased … and I thank my colleagues in the Senate for their support of this good legislation,” Hager said, hours after the vote. “The support for the bill was overwhelming and I look forward to working with my fellow House members to pass this good bill.”

Hager’s HB 439 would give cities the authority to regulate smoking in parks, playgrounds, beaches and other outdoor spaces. For the past decade the state has had control of smoking, barring people from lighting up in restaurants and public buildings.

The proposal to turn authority over to cities has, as expected, gained support from anti-smoking groups and environmentalists who clean up beaches, and criticism from the tobacco industry and restaurant associations.

Kelly Wiseman lives in Delray Beach and several times a week jogs on the beach, taking in the beauty of the natural outdoors — the sound of the surf, smells and special sand surface. “When smokers throw down their cigarette butts, that destroys nature,” Wiseman said. “And they pollute the air so they’re denaturalizing the beach all together.”

General manager and a trainer at Get In Shape for Women in Palm Beach Gardens, Wiseman has been teaching fitness for nearly 30 years so admits no tolerance toward smokers. “I support any legislation that would keep smokers from polluting more public space.”

Jim Bennington, owner of Bennington Tobacconist of Boca Raton, a store that sells specialty cigars and pipes, said his concern is how far cities will go toward controlling smoking, should the power be handed to them.

Hager, though, has faith that city and municipalities won’t overstep.

“I trust and embrace our local government to make decisions that impact their own communities at a local level,” Hagar said. “It’s important to understand that this bill does not mandate a smoke-free outdoor Florida. It allows local government, should they choose to do so, to create a nonsmoking playground, park or beach. While doing so, a designated smoking area will have to be created. This bill creates a healthier Florida for all of us.”

Sarasota County, home to Siesta Key, named the No. 1 beach in the U.S. in 2011, passed the regulation for its parks and beaches. A Sarasota County judge threw it out in December, saying it was unenforceable, ruling that regulating smoking was a task left to the Legislature.

Commissioner Adam Frankel said, “It seems to me it’s another example of Tallahassee
telling us what’s right for our beach. I also recognize the city needs to go about things legally in that regard. I would like us to support Rep. Hager and get some help in the Senate.”

Commissioner Angeleta Gray said that during a recent weekend she was on the beach as part of a cleanup that collected 67 bags of trash. “The young people picked up so many butts.” Gray said she agreed with designating a smoking area, but was a concerned that enforcement by Ocean Rescue would distract lifeguards.

Commissioner Al Jacquet said he was not that confident that the bill will pass, and that he would oppose any local measure that would take the lifeguards away from their primary duty.

Mayor Tom Carney said he concurred with Frankel and others that Delray Beach needs to work with legislators to get the bill passed.  “We should go on the record to say we want smoke-free beaches,” Carney said, adding that it’s not the job of lifeguards to “chase down smokers.”

Pushing through this kind of legislation isn’t new to Hager. In 2011 he won passage of a bill that gives school boards the authority to ban smoking anywhere on school district property. The American Cancer Society later named him freshman legislator of the year.

Hager’s current bill has been assigned to three House committees for consideration; the first hearing, not scheduled as of Feb. 22, will be in the House health quality subcommittee.

Hager and Bradley are both Republicans, giving the chances of the bills getting to a vote a boost in the Republican-controlled House.

Regulating smoking in outdoor public places is gaining momentum in communities across the country. Some that are working on state or local legislation are:

* The District of Columbia

* The state of Oklahoma

Margie Plunkett contributed to this story.