An Ocean Ridge resident said he felt “outrage” after receiving a notice in February demanding $401.80 for a 2015 ticket generated by a red-light camera in Boynton Beach.
“Warning: Your license may be suspended,” the letter said.
Three or four years later? Better buckle up. Similar shocks potentially await thousands of drivers in the latest chapter of the off-again, on-again saga of red- light cameras.
Attorney Ted Hollander of the Ticket Clinic, which has an office in Boynton Beach, said he can understand why drivers might feel whipsawed.
“There’s been tons of confusion,” Hollander said. “It’s been a mess for 10 years.”
Nearly all participating cities in Palm Beach County turned the cameras off after lower-court action seemed to put their legality in question in recent years, but a Florida Supreme Court decision upheld the camera law last year.
Alone among its county peers, Boynton Beach turned its cameras back on in 2017.
Now a bulging backlog of more than 14,000 unpaid tickets across the county threatens consequences far tougher than an initial fine of $158 with no points on a driving slate, records requested by The Coastal Star show. 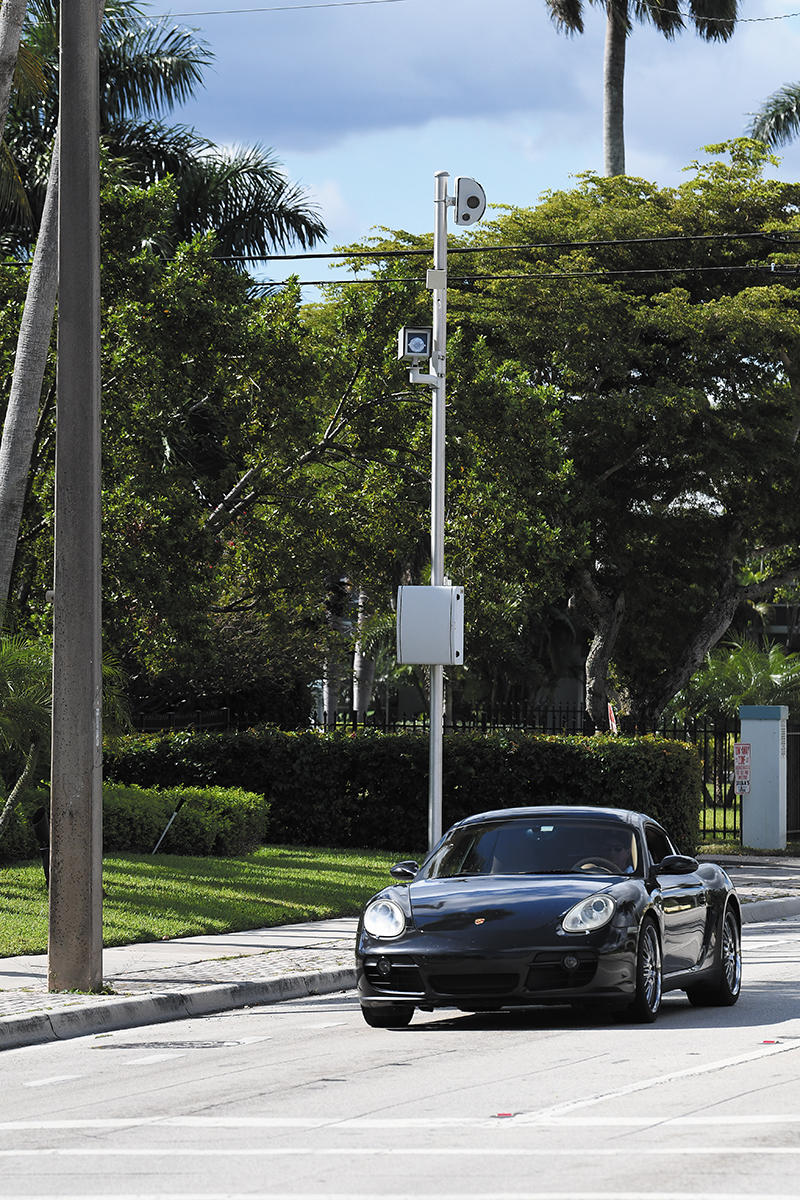 Red-light cameras like this one at Federal Highway and Southeast 23rd Avenue in Boynton Beach record images of vehicles and their rear license tags. The system automatically generates tickets. The city has a total of 15 cameras covering seven intersections. Jerry Lower/The Coastal Star

Some drivers say they don’t remember initial notices of violation. Others thought the tickets were no longer valid.
“The street talk was it’s not enforceable,” said Joe Bryan of Boynton Beach, who said he was not sure what to make of two tickets affecting his household from 2016. “That’s what I heard.”
He said he has mixed feelings about the devices: “I think cameras are great for crime and safety, but it’s almost like Big Brother stuff.”
A considerable mound of cases has piled up in the system while all of this played out.
Records provided by the Palm Beach County Clerk’s Office show more than 85,000 cases were referred to its office since 2010 involving more than $20 million in red-light camera fines that were not paid promptly in the local municipalities.
The clerk’s office has sent more than 25,000 cases to collection companies, which are allowed under state law to charge fees up to 40 percent on top of fines and other costs that ratchet up over time if tickets remain unpaid, records show.
If a payment has not been submitted within 30 days, the original municipal infraction will become a Red Light Traffic Citation with a higher fine, according to the clerk’s website. At that point, drivers might pay $264, or take their chances a court may assess a penalty up to $500, plus court costs of $106, the website says.
State law allows the office to send cases to collection, a clerk’s office spokeswoman said.
More than 14,000 tickets sent to the clerk’s office remained unpaid as of March, records show. Unpaid fees ranged as high as $574 in a 2016 case originating in Boynton Beach.
Adding to the confusion, drivers may remember headlines about court decisions along the way that ruled for or against the law or put enforcement of tickets on hold. There have been debates about whether cities would enforce slow-rolling right turns on red, for example. Cities wrestled with accident statistics at the camera intersections, parsing whether the cameras were reducing harm or increasing certain kinds of accidents such as rear-end collisions when camera-wary drivers slammed on the brakes.
In public meetings and water-cooler discussions, the debate raged about whether the cameras were a valuable deterrent against unsafe driving or a gotcha-government generator of revenue that cities and private camera vendors split. Many cities, from West Palm Beach to Boca Raton, stopped operating the cameras and never turned them back on. 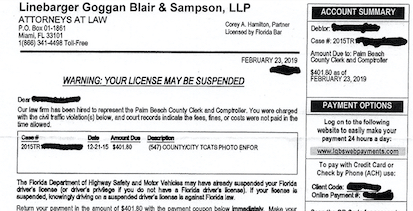 An Ocean Ridge resident thought the enforcement of tickets had been put on hold by the courts and later received this notice of license suspension. Photo provided

Meanwhile, thousands of citations went out to car owners in an atmosphere where many people were unsure about what would be enforced. Some were seasonal residents who had trouble keeping up with what the law was at any given moment.
So what can drivers do if an old ticket pops up? They should take it seriously, Hollander said.
One problem in fighting certain older tickets is that it can be difficult to persuade courts to order the cases out of collection, he said.
If that considerable hurdle can be overcome, tickets often can be reduced or thrown out, particularly those involving cities that no longer operate the cameras, he said. One practical reason is the cities may no longer assign specialized police staff to oversee red- light cameras, leaving no one experienced in the cases to show up in court to defend them, he said.
But Boynton Beach is different. After suspending cameras for nearly a year, its commission voted to turn them on again in September 2017. Red-light cameras were expected to bring in more than $800,000 annually at the time, published reports show.
Before a City Commission meeting in April, Mayor Steven Grant defended the cameras not because of revenue but public safety reasons that he said can extend beyond traffic issues to violent crimes, providing another eye on criminal suspects racing through the streets.
It’s “for safety,” Grant said. “There’s video evidence of someone running or not running a red light.”
Residents like Bryan are still trying to sort it out and reeling from “a lot of confusion out there.”