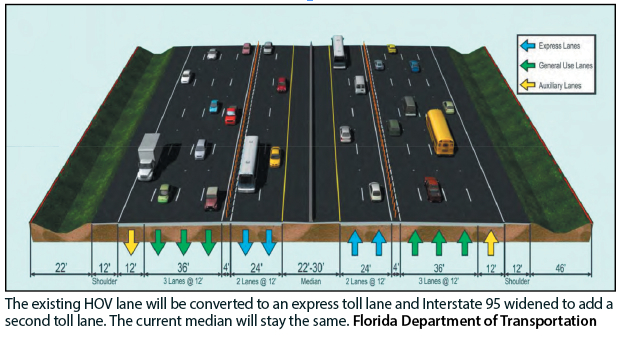 If you thought construction crews would vanish from Interstate 95 as work on the Spanish River Boulevard interchange wound down, guess again.
In a combined open house/public meeting March 14, state transportation officials reviewed plans to convert high occupancy vehicle lanes from Deerfield Beach to Delray Beach into “express” toll lanes over the next eight years. The projects include redoing the I-95 interchanges at Glades Road and Linton Boulevard.
Work has already started on the $102 million first phase, adding two toll lanes in both directions from south of Southwest 10th Street in Deerfield Beach to south of Glades Road. When finished in 2022, the interstate will be at least six lanes wide each way, two with tolls and four without.
Motorists on the express lanes in Miami-Dade County pay tolls of 50 cents to $10.50, depending on time of day and congestion. The goal is to keep traffic in the express lanes moving at an average speed of 45 to 50 mph, the Florida Department of Transportation says.
Also during the first phase, the bridge over the Hillsboro Canal will be replaced, and bridges over Camino Real and Palmetto Park Road will be widened.
The second phase, estimated to cost $130 million, will take the toll lanes from south of Glades to south of Linton and improve the exit and entrance ramps at both interchanges. Engineers will add traffic signals on entrance ramps to optimize the merging of traffic at both highways and at Spanish River, Yamato Road and Congress Avenue. Construction is planned to start in 2020 and end in 2024.
When it’s finished, “if you enter south of Congress, you can travel on the express lane system all the way to Miami,” state DOT project manager Vanita Saini said.
Bridges will also have to be widened in the second phase, notably the one over the C-15 canal separating Boca Raton and Delray Beach. The bridge on Clint Moore Road will be replaced.
FDOT spokeswoman Andi Pacini said 220 construction days, a little more than seven months’ time, was added to the Spanish River interchange project to widen the bridges in anticipation of the express lane work and “to avoid having major impacts to motorists.”
The Glades Road work will include adding triple-lane left- and right-turn lanes on both the southbound and northbound exit ramps, widening Glades Road and the bridges over I-95 and Military Trail to make room for auxiliary lanes and ramps, reconstructing both southbound entrance ramps, and building a bridge over Airport Road for westbound Glades traffic headed to I-95.
At Linton Boulevard, all the entrance and exit ramps will be reconstructed and Linton will be widened to add auxiliary lanes in both directions.