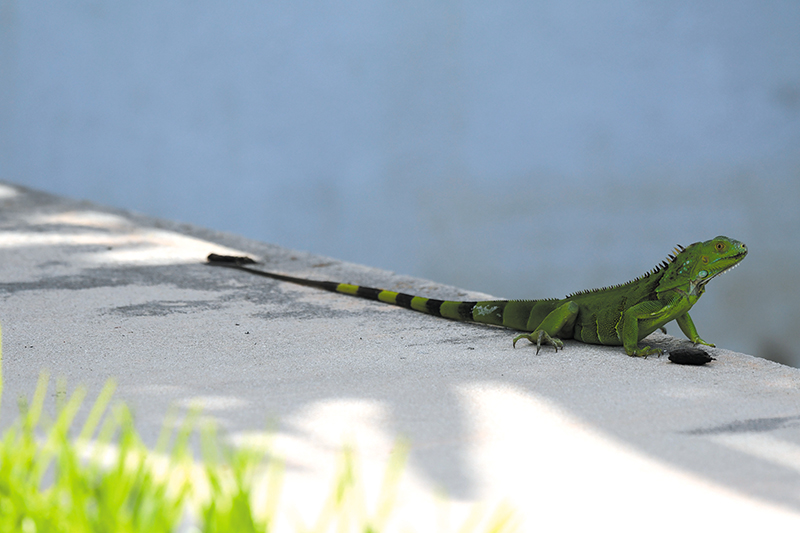 Iguanas have become as big a part of the South Florida landscape as sunburned snowbirds. The invasive reptiles are here, they are staying and there are a lot of them.
Coastal towns and residents are grappling with how to deal with the critters, which feed mostly on vegetation, can be harmful to infrastructure by burrowing beneath sidewalks and seawalls, and leave droppings everywhere.
The Florida Fish and Wildlife Conservation Commission offers suggestions on how to control, not eliminate, iguanas from individual private property and town- or city-owned public lands.
If people want to kill the creatures, it’s OK by the FWC, but it must be done humanely. A permit is not needed.
“The general guideline is to end the iguana’s life instantly — suddenly and without any suffering,” Zoo Miami animal ambassador Ron Magill told the Sun-Sentinel in February. “Hitting the iguana on the head with a shovel is OK, as long as you aim correctly and kill it in the first stroke. Hit it more than once and you could be charged with a crime.”
The FWC recommends the following:
• Shooting the animal with a captive bolt gun (pellet gun) and then decapitating it.
• Stunning the iguana with a yard tool, followed by decapitation.
• A carbon dioxide chamber, if you plan to eat the iguana meat.
• Anesthetic halothane, isoflurane or sevoflurane administered by a veterinarian.
• Cervical dislocation on small juveniles only.
But no firearms can be used. Florida Statute 790.15(1) states that any person who knowingly discharges a firearm in any public place or on or over the right of way of any paved public road, highway or street, or over any occupied premises, is guilty of a misdemeanor of the first degree. It is punishable by 12 months in jail and a $500 fine.
Animal cruelty is a misdemeanor of the first degree, punishable with a year in prison, a fine of $5,000, or both.
Iguanas are typically found in wooded areas with lots of shrubbery, usually near water. They are cold-blooded and become much more active in warm weather.
Ocean Ridge’s Jimmy McAndrew, 73, got interested in trying to control iguanas on his property two years ago.
“My then 97-year-old mother-in-law came in the back door and told me there was a dinosaur in the backyard,” McAndrew said. “That’s when I got involved. The iguanas had dug nests in the yards of the properties to my left and right and there were droppings all over my deck.”
He hired Iguana Control, based in Coral Springs.
“They are very good, very helpful,” McAndrew said. “I haven’t been there in five months, but they had taken about 40 iguanas off the property. They trap and shoot them. They are good to work with and I like them. In fact, I think it would make a good business to go into. It is no small matter here. It’s a big problem.”
Ocean Ridge Town Manager Tracey Stevens said that municipality also hired Iguana Control.
“There were many complaints about the iguanas being very destructive and about feces being everywhere — in pools and on seawalls,” Stevens said. “The company is using pellet guns and traps. They caught 91 iguanas between Jan. 7 and the end of March. And they got 83 in July. They are doing a good job.”
Some other factors can limit the negative impact of iguanas.
Bryan Mudd, 53, is a licensed alligator trapper who gets many calls on nuisance iguanas. He said the weather has a lot to do with the problem.
“What we need is a good cold snap,” said Mudd, who lives in Boca Raton. “It’s been nine years since we had a good freeze. That is one reason why there are so many of them. When it freezes, the iguanas either freeze or become paralyzed — often falling out of trees — and appear dead.”
If you don’t want to wait for weather, the FWC says you can trap iguanas on your property and humanely kill them. You cannot relocate them. State guidelines make homeowners responsible for any animal caught in traps. All traps must be checked at least once every 24 hours.
Property owners can also fill in holes to discourage iguanas from burrowing. Hanging wind chimes and compact discs with shiny surfaces may also annoy iguanas and make them leave your property.
The FWC also suggests using wire mesh screening to create a barrier around plants and installing chicken wire at least one foot beneath the soil around your fences or seawalls to prevent iguanas from digging underneath them.