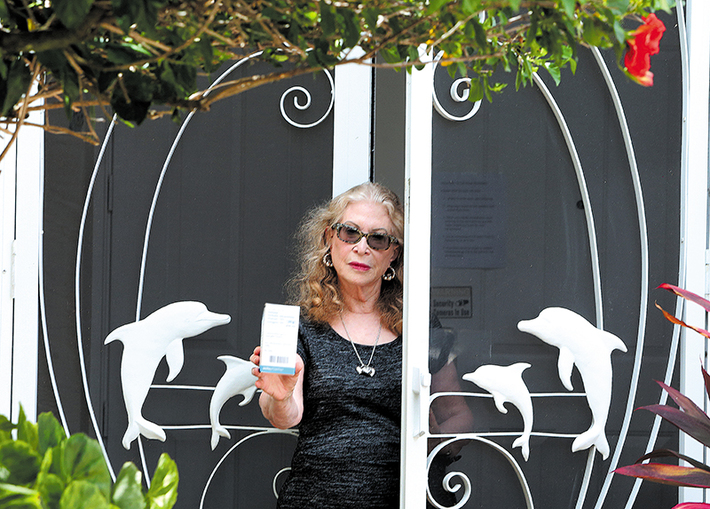 The Florida Board of Pharmacy has rules meant to ensure home-delivered medicines arrive unadulterated, but Miriam Sivak of Boynton Beach said a box of her prescriptions — and the cooling pads inside — were hot to the touch. The shipping box (lower right) was clearly marked as perishable. She chose not to take the medication after getting conflicting advice from the pharmacy rep and manufacturer. Photos by Tim Stepien/The Coastal Star

Related story: Along the Coast: Pros and cons of prescriptions by mail or delivery

Medication hot to the touch shows risks of booming business 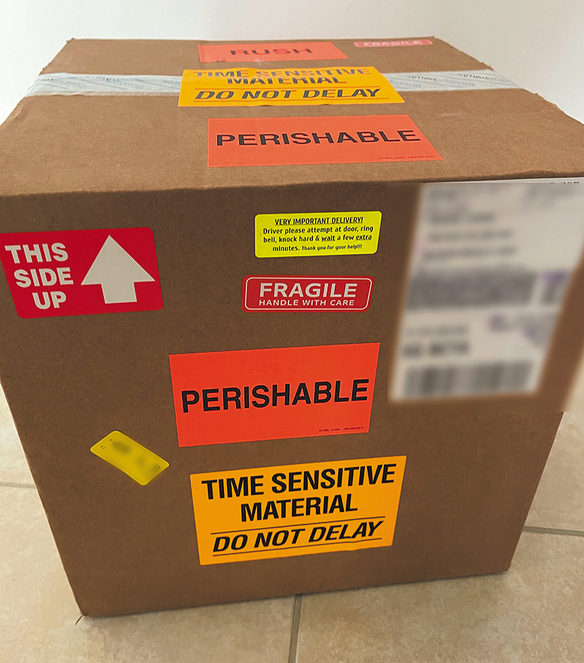 Like millions of Americans, Miriam Sivak agreed to receive prescription medicine by delivery to her Boynton Beach home — but the arrival of a package on a hot June day filled her with anxiety.
The medicine, an infusion treatment for an immune condition, was supposed to be kept at a controlled temperature. But it arrived late and hot to the touch, she said. So were the cooling packs in the container.
Her reaction? “Stunned,” said Sivak, 80.
Floridians get at least $8 billion worth of prescriptions delivered, sometimes steered to do so by financial incentives in their health plans or a desire to cut down on trips outside the home.
While the practice can offer convenience, it also has stirred concerns. These include lost, late or damaged shipments, questions about the consistency of delivery safeguards and regulatory oversight, and — especially in a state like Florida — exposure to extreme temperatures.
In a world where more and more stuff gets delivered, consumers learn to factor in mishaps like a chip in a porcelain figurine or plants that wither. Not ideal, but it happens.
It’s harder to dismiss with a shrug, though, when it’s a prescription medicine — where a person’s life and health may be at stake.
Sivak began making worried calls to the pharmacy, the drug manufacturer and anyone else who could advise her. A pharmacy representative assured her the medicine was fine, as it could withstand a certain number of days up to 104 degrees, or even for shorter periods up to 124 degrees, she said. Others advised caution.
She chose not to take the medicine.
“The manufacturer told me there was no way we could know how hot that medication got,” she said.
A federal agency once measured temperatures up to 136 degrees inside mailboxes exposed to direct sun in St. Louis. Heat exceeding 150 degrees has been reported in the back of commercial delivery vans without air conditioning in Florida and Arizona.
But typical packages don’t arrive with any way to measure how hot the contents got along the way.
Packages arriving hot, late or both can put the customer in a bind.
“We’ve had multiple situations where people bring stuff in, asking if it’s still safe to use,” said Tom Craig, who co-owns Gulfstream Pharmacy in Briny Breezes with his wife, Erin Craig, a pharmacist.
This has happened with prescription eye drops, for example, he said.
In some cases, the trouble is an interruption in supply because of a delivery tie-up.
“We’ve had to call a doctor many times and ask for a three-day supply because the mail order was late,” he said.
Another potential risk: There has been a rash of thefts from mailboxes in local municipalities in recent months, in some cases involving the fraudulent altering of checks.
To date, Ocean Ridge Police Chief Richard Jones said he is not aware of anyone stealing prescription drugs. Several employees in his department get prescription drugs sent to the office, he noted.
At UPS, the world’s largest package delivery company, many warehouses and trucks operate without air conditioning. Union officials have cited cases of drivers being hospitalized for heat illness and asked for greater protection as a contract comes up for renewal next year, published reports show.
As for medicine delivery, UPS spokeswoman Christina Repassy said the company “works with customers to ensure they have the proper packaging” with “gels, dry ice, etc., to maintain the required temperature.”
Customers such as pharmacies sending medication can “develop solutions on their own” or work with UPS to “design packaging that can ensure needed temperature throughout transport and delivery,” she said.

Pandemic boosted business
Home delivery of prescriptions has existed in one form or another for decades, but the coronavirus provided a push factor to expand it on a wide range of medicines.
Florida had close to 10 million prescriptions filled by mail in 2019, according to data cited by the Kaiser Family Foundation. That was nearly equivalent to one delivery for every two residents, though of course any given recipient might be getting multiple prescriptions filled that way in the course of a year.
Nationally, 1 in 6 enrollees in Medicare Part D, the prescription drug benefit, used mail order for at least one prescription. That suggests plenty of deliveries in Palm Beach County, where nearly a quarter of the residents are 65 or older, in addition to younger folks who might get medicines by mail.
The pandemic only accelerated the trend, as some patients were subjected to stay-at-home orders or just wanted to limit face-to-face interactions to stay safe. In the first seven months of 2020, use of mail order increased up to 20% over 2019 levels, Kaiser found.
But 2020 also brought reminders of potential tangles with mail delivery. Service cutbacks at the U.S. Postal Service, some later postponed or modified, produced warnings in congressional hearings about delays in everything from mailed ballots to prescriptions.
And it became increasingly clear the delivery trend was colliding with weather extremes. A Nevada woman interviewed by NBC said her insurance company told her she could get migraine medication by mail order for about $50 a month, or pay out of pocket at around $600 a dose, she said. The injectable medicine was supposed to be kept refrigerated, but she said it arrived a day late, with the ice packs melted, sitting in 94-degree evening heat on her stoop.
The Centers for Medicare and Medicaid Services do not regulate or monitor delivery services through Part D, in which a private insurer may partner with the government to deliver medicine, a CMS spokeswoman said.
“It is important to note that pharmacies must comply with safety requirements pertaining to handling medications when sending them through the mail under the U.S. Food & Drug Administration and state law,” the CMS spokeswoman said. “If there are temperature requirements of certain medications, they must be sent through delivery services that can provide those requirements or they cannot be sent through the mail at all.”
An FDA spokeswoman said the agency oversees the approval and manufacture of prescription drugs, but she referred questions about delivery to state boards of pharmacy.
The Florida Board of Pharmacy enforces rules that pharmacies “must have and follow policies and procedures to ensure medicinal drugs are not adulterated,” a Florida Department of Health spokesperson said.
For consumers concerned about, say, the shipping or handling of drugs, there is an online portal to file complaints (https://mqa-flhealthcomplaint.doh.state.fl.us/).
Records show 99 administrative and disciplinary actions in 2022 as of Aug. 24, after 178 in 2021, 255 in 2020 and 211 in 2019. Penalties can include fines or revocation of licenses to operate in Florida for pharmacies based here or in other states. But the state database offers no way to search for cases involving delivery problems in particular.
A 2020 case alleged a Boca Raton pharmacist shipped misbranded compounded drug products out of state. A settlement was reached, involving a fine of more than $1,500, records show.

Complaints hard to gauge
The FDA received 2.3 million reports of “adverse events” associated with drugs and therapeutic biologic products in 2021, up from 2.2 million the year before, a government database shows. The reports do not prove a given drug caused a reported symptom, which can range from a headache to life-threatening conditions, disclaimers note.
Relatively few cases deal with the delivery of drugs, at least as an identified category. Complaints the FDA classified as a “manufacturing product shipping issue” rose to 68 in 2021 from 64 in 2020, after 124 in 2019, records show.
Then again, a consumer might not have an adverse reaction to report if she chooses not to take a medicine that arrives hot to the touch or otherwise in question.
Even if a consumer took a drug and suspected it may not have been handled properly, proving that it caused adverse health effects can be difficult. The drug itself may have been consumed and unavailable for testing. In addition, many consumers are not sure where to direct a complaint — to the delivery company, the issuing pharmacy, the insurance company? Not all of those routes would necessarily lead to a report registering in an FDA database.
The Package Shippers Association, whose members include UPS, FedEx and others, did not respond to questions for this story.
Neither did AHIP, formerly known as America’s Health Insurance Plans, whose members include Aetna, CVS Health, Cigna and other large health insurers.
But Sivak believes the issue should not be ignored. She remembers the feeling, during some of her phone conversations, that “they tried to browbeat me, saying it’s perfectly fine.”
She wonders how many other people find themselves wondering what to do when an arriving package produces a queasy feeling.
“I could have gotten seriously hurt,” she said. “There’s no oversight and we need oversight.”