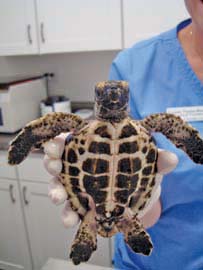 A 1-year-old hawksbill turtle found on Easter Sunday has been released after being nursed back to health at the Gumbo Limbo Nature Center in Boca Raton. Photo provided

Easter the hawksbill turtle had its own resurrection, thanks to Delray Beach resident Joan Lorne.
The teacher’s aide was walking along the beach with her twin brother, Tim Paller, also of Delray Beach, on Easter Sunday when she found the young turtle.
As a sea turtle monitor, she watches out for hatchlings and nests along a three-mile shoreline from southern Ocean Ridge to northern Delray Beach and scours the beach to mark nests before the cleaning crews come in. She also rescues stranded hatchlings.
“I go out twice a week. We have four others who monitor a three-mile stretch,” she said. To be a monitor or to handle sea turtles, which are protected species, you must be permitted by the Florida Fish and Wildlife Conservation Commission. Lorne’s daughter, a marine biologist, is a permit holder, and her mother now watches over the beach on her behalf.
Finding a hawksbill is unusual. The endangered species is generally found much farther south.
“I knew it was a hawksbill,” Lorne said. “They are a dark brown and beautiful. Their shells used to be used for tortoiseshell jewelry. We don’t often see them on our beach; we get mostly loggerheads. We’ve had leatherbacks, now we get both, frequently.”
She put the 3-inch turtle in a towel, and made a call to the FFWCC. “They told us to take it to Gumbo Limbo. The rehabilitation team took in the turtle. We decided to name it Easter since we found it Easter Sunday.”
Whitney Crowder is the assistant sea turtle rehab coordinator at Gumbo Limbo. She described the little turtle as “lethargic, weak and emaciated” when it arrived.
“As time progressed, we noticed he was passing plastic in his fecal matter. It’s common, unfortunately, to this sized turtle.” 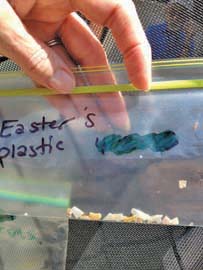 Bits of plastic passed by the turtle. Photo provided

The turtle that was post-hatchling, meaning it was hatched last season, had been eating along a weed line and ingesting tiny particles of plastic that are trapped there, and it became impacted.
Though X-rays were taken, they couldn’t see anything in the baby turtle — it was simply too small.
Feeding them quantities of foods or a laxative to flush their systems isn’t practical in the baby turtles, Crowder said.
“They eat such small pieces of food,” she said. “Normally, we’d do mineral oil. He’s so small, we didn’t. We just kept going through his fecal matter to make sure he was passing  the plastic.” The rescue workers gave him liquids, and fed him “teeny tiny pieces of squid tentacle and shrimp,” Crowder said.  “We feed them slowly and give them lots of fluids, then just wait for the plastic to pass.”
Workers collected the plastic beads to analyze, though Crowder says there’s no way of telling where the plastic came from or what type it is.
Lorne worried over her rescue-baby.
“I checked with Gumbo Limbo five days later. They were about to X-ray the turtle and they held up the bag with several plastic pellets. “I saw the turtle in the tank. When I saw how happy and active it was, I was relieved. Gumbo Limbo is awesome.”
Easter became so strong, he climbed out of the basket he was sharing with other hatchlings, so was put in his own tank.
Though they referred to him as a “he,” they can’t know if Easter is a male or female without an internal exam. Its sex can’t be determined by sight until it’s 20 or 25 years old, when it becomes sexually active, Crowder said. Males have larger tails — the site of the sexual organs.
Once a few weeks had gone by and the turtle had regained its strength and was eating heartily, it got a free ride back to the Gulf Stream on May 3.
It was released with another young hawksbill that had appeared with the same problem, Crowder said.
“They’re released several miles offshore in the Gulf Stream — which is where they’re headed. It gives them a better chance for survival.”
Though she didn’t witness the release, she was happy for Easter, Lorne said. “It’s a good ending to a story about people who litter.”
If you happen upon a sea turtle beached or in distress, call the Florida Fish and Wildlife Conservation Commission hotline to report it before moving the turtle, Crowder said. “They’ll guide you with instructions on how to handle it, or put you in touch with someone permitted to handle sea turtles.”
The toll-free number is 888-404-3922.