ABOVE: Paul Redclift and John Girard gave good reviews to the FPL crew that installed a transformer on Redclift’s property on Las Casas Road in Boca Raton. FPL thinks underground lines will ease power outages, but everyone in each selected small area must agree to have the work done. BELOW LEFT: Lines no longer run through the air in the neighborhood. BELOW RIGHT: Part of the power pole is gone; cable service still needs to be buried. Tim Stepien/The Coastal Star 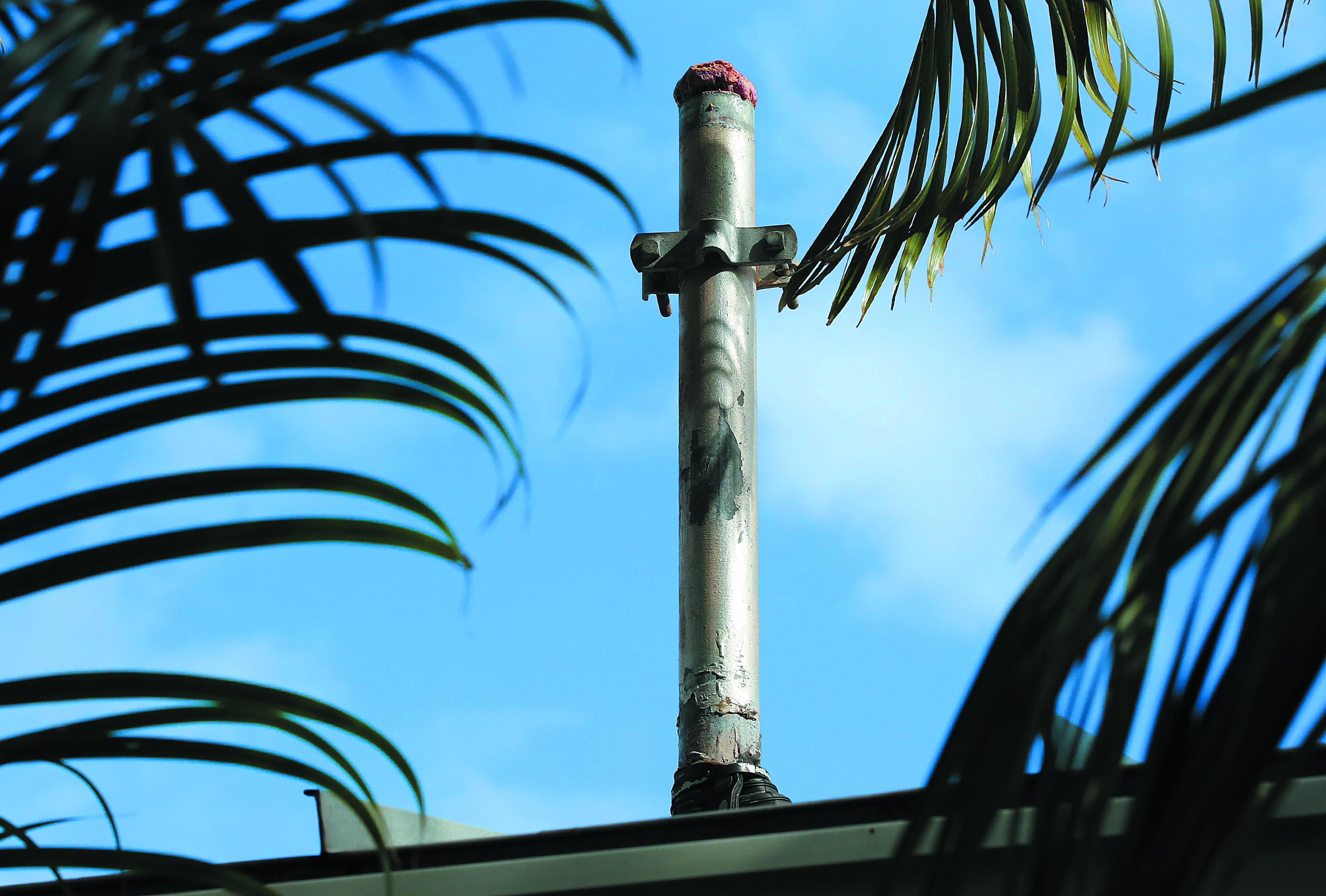 Every time a strong storm blew through Palm Beach County, Boca Raton resident John Girard would lose power for 11 or 12 days while neighbors across the street had power restored in a matter of hours.
So when Florida Power & Light Co. asked if he would participate in a pilot project to place power lines underground in a section of his Palm Beach Farms neighborhood, Girard didn’t hesitate.
“I said sure. The best news I have ever heard,” he said.
The work was completed about a month ago and involved about 50 customers. Girard is hopeful that even if he does lose power during future storms, outages won’t last as long.
“All I can say is the crews they hired were polite. They were neat. They were thoughtful,” he said. “The proof will be in the pudding. We will see what happens when hurricane season comes and any storms hit.”
Since FPL started the three-year pilot project last year, it has finished burying power lines in five neighborhoods: Girard’s between Southwest 20th and 21st streets and Las Casas and Gonzalo roads, three apartment buildings near the corner of South Ocean Boulevard and Osceola Drive in Boca Raton, and in Sarasota, Pompano Beach and Fort Pierce.
The company plans more than 300 other projects across the state, including 14 in Boca Raton, 12 in Delray Beach and six in Boynton Beach. Each of the projects will be small, involving an average of 30 customers.
The goal is to test new methods of placing power lines underground that are more efficient and less expensive and disruptive than methods used in the past.
FPL will then analyze how well the underground lines perform during future storms as it decides how best to further harden the energy grid.
“I think we are going to see positive results,” said FPL spokesman Bill Orlove.
The reason for optimism is that underground lines in neighborhoods performed 95 percent better than overhead lines during Hurricane Matthew in 2016, 83 percent better than during Hurricane Irma in 2017, and 50 percent better in day-to-day operations, according to FPL.
FPL customers can’t ask to be included in a pilot project. The utility already has selected the locations based on the number of outages during Matthew and Irma, outages due to vegetation that blew into overhead lines, and day-to-day reliability.
Being selected by FPL doesn’t mean a specific project will be completed. All customers in the area must agree to participate. They also must grant easements so transformers can be placed in their yards and the lines put underground. If all don’t agree, FPL moves on.
“We have walked away from some projects because we were not able to get consensus,” Orlove said.
But most selected customers have been willing.
“Customers were happy to see we were taking their concerns about reliability seriously,” he said.
The work is completed at no extra cost to the selected customers, but that doesn’t mean it is free. The cost is included in the electric rates all customers pay.
FPL offers no guarantee that burying power lines will eliminate outages.
“Undergrounding is not a magic elixir,” Orlove noted.
FPL operates a hybrid system. Nearly 40 percent of its 68,000 miles of distribution power lines are underground, with the rest overhead. If a tree falling into an overhead line knocks out power where the underground lines link up with overhead lines, the customer with buried lines will lose power.
The utility has been placing more lines underground for years, but the work has been very expensive.
That is less of an issue now because FPL has been able to reduce the cost, in part by using methods that install the lines more efficiently without digging up ground. That coincides with the data showing that underground lines perform better, giving more incentive to place lines underground.
But underground line outages also can be triggered by flooding and storm surges, and it can take more time to locate a problem and fix it. Damage to overhead lines can be easier to spot and repair.
Another benefit of burying power lines is aesthetic.
Typical power lines run along Las Casas Road until the block where Girard and his next-door neighbor, Paul Redclift, live.
“The power lines are all gone now,” Redclift said.
Other than that, both men said there is little sign that a crew recently did the work.
The crew used a bore to place the lines underground, so the men’s yards were not dug up. A 3-foot by 3-foot transformer box is located behind a hedge, Redclift said.
“I barely noticed they were here,” he said of the crew.