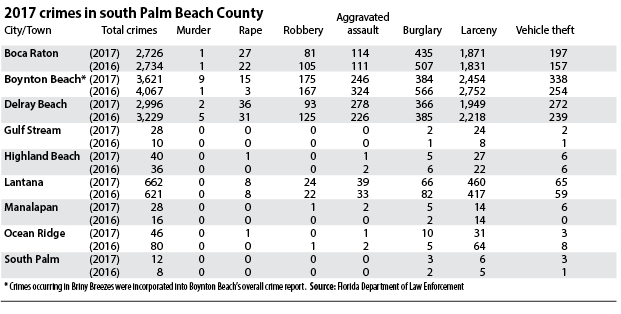 South Palm Beach County’s five small coastal communities continued to have few serious crimes reported in 2017, according to statistics released last month by the Florida Department of Law Enforcement.
There were 154 total serious crimes, ranging from larceny to rape, in the five communities — Gulf Stream, Highland Beach, Manalapan, Ocean Ridge and South Palm Beach — compared with 150 reported in 2016.
All of the communities, however, experienced slight increases in offenses, with the exception of Ocean Ridge, which saw a 42.5 percent decrease in crimes reported.
Also seeing decreases were south Palm Beach County’s larger cities of Boca Raton, Boynton Beach and Delray Beach. Lantana experienced a slight increase in reported crimes.
Larcenies, often thefts from unlocked vehicles, increased from eight to 24 in Gulf Stream and from 22 to 27 in Highland Beach. They remained flat in Manalapan, which saw 14 larcenies, and increased from five to six in South Palm Beach.
Gulf Stream Police Chief Ed Allen said the larcenies ranged from tools being taken from job sites to valuables being taken from a handful of unlocked vehicles.
“It’s just a variety of things.” he said.
In Ocean Ridge, the number of larcenies dropped from 64 to 31, with a decrease in the number of reported thefts from unlocked vehicles accounting for a large portion of the decline.
Ocean Ridge Police Chief Hal Hutchins said the decline in the number of larcenies could be attributed to several variables, including more awareness among residents of the need to remove valuables and lock cars as well as changes in the department’s patrol tactics.
“Everything together drove that number down,” he said. “Could that change overnight? Certainly.”
Hutchins is cautious about putting too much emphasis on the statistics, especially in small towns where the number of crimes are low and just a few crimes can have an impact on the percentage of increase or decrease in the numbers.
Still, he said, his department is doing its best to see the number of overall crimes in the community decline.
“We’re happy to see some decline in the crimes we typically encounter here,” he said. “We’d like to see these numbers go down every year, and our officers and residents have formed a partnership to do just that.”
Overall crime in Palm Beach County dropped by 5.6 percent, while the number of crimes statewide declined 4.5 percent compared to 2016.