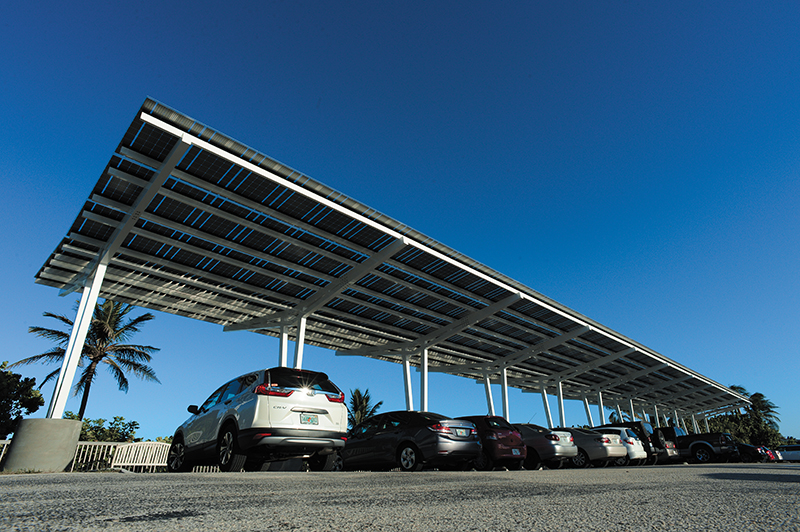 If you happen to score one of the parking spaces under the new sunshades by the beach at Boynton Beach’s Oceanfront Park, you’ll be interested to know that what’s shading your car is also collecting solar energy and feeding it back into Florida Power & Light’s system. While you’re there, you can use that solar energy to recharge your phone and other electronic devices at the small blue solar trees nearby.

The two parking canopies started generating 200 kilowatts of solar power per hour into FPL’s grid this summer and the parking spaces are now available. In six hours on a sunny day, they can generate about 1,200 kilowatts, or enough power for 1,200 average-size classrooms.

Those large solar canopies and two blue solar trees along with another solar tree at the city’s Barrier Free Park are part of FPL’s SolarNow program, which includes six parks in Palm Beach County. The others are Palm Beach Gardens’ Aquatic Center and Joseph Russo Athletic Complex, Riviera Beach’s Barracuda Bay and Howard Park in West Palm Beach. In all, the six parks are providing the grid with more than 300 kilowatts of clean solar energy each daylight hour.

SolarNow is supported by voluntary $9 monthly contributions from about 35,000 FPL customers, for the purpose of constructing solar arrays in public spaces, said Devaney Iglesias, an FPL spokeswoman.

By the end of the summer FPL planned to have 130 such solar arrays across its service areas.

The blue solar trees at Oceanfront Park each stand 24 feet tall and provide 200 square feet of shade. The two larger canopies shade 60 parking spaces in all and the adjacent sidewalk, said Iglesias.

Statewide, FPL is producing 931 megawatts of solar power, most of that coming from the 14 much larger solar energy centers. Solar power amounts to about 1 percent of energy from all FPL’s sources, but solar power is already outpacing coal and oil combined and is expected to increase to 4,000 megawatts, or 5 percent of output, by 2023, Iglesias said.

FPL shut down two of its coal plants and is in the process of shutting down its third.

Another function of the solar canopies is to educate.

Next to the solar trees are plaques explaining how the solar arrays convert direct current from the sun into alternating current, supplied to homes and businesses.

“Usually [solar panels] are located on rooftops,” said Iglesias. ‘It’s rare that you see it up close. It inspires people.”

The solar canopies and trees “dovetail with what we’re doing in the city,” said Rebecca Harvey, sustainability coordinator for the Boynton Beach Utilities Department. “One of my goals is to promote solar energy as part of a climate action plan.”

Boynton Beach is one of 7,000 cities in the Global Covenant of Mayors for Climate & Energy, through which the city can receive international recognition for such things as climate action plans and reduction of greenhouse gases.

In addition to the solar canopies, Boynton Beach installed solar panels on the Fire Department headquarters in 2010, using a block grant to decrease the cost. The city’s six electric-vehicle charging stations will be temporarily displaced by the Town Square project, which is upgrading city buildings in the downtown area.

The city has been recognized by the U.S. Department of Energy for providing a streamlined three-day process for getting permits for solar installations.

Each canopy at the beach is approximately 33 by 200 feet. What provides shade on a hot day could look like potential projectiles during hurricane season. The canopies are anchored in steel-reinforced concrete, said Iglesias.

And they have already undergone their first real-world test. During Hurricane Irma in 2017, “we had one [solar] tree that needed the bolts to be secured,” said Iglesias, and fewer than 50 of the company’s 250 million solar panels received any damage from flying debris.

She said that all of FPL’s solar arrays, including the large solar energy centers, are built to withstand Category 5 winds.

In addition to public projects like SolarNow, FPL has about 8,000 private solar power users in its net metering program, which subtracts the customers’ solar kilowatts from their bills.

“I know people who have $10 electric bills,” said Diane Marks of Solar United Neighbors, a statewide advocacy group that educates consumers on solar use. The group has been working for several years to add third-party ownership and financing of solar projects, which would allow, for example, a condo company to lease solar equipment and sell it to individual condo owners.

People from a senior community left a recent informational meeting disappointed when they realized that currently in Florida, they could not add solar without a third-party agreement, Marks said.

Solar United Neighbors and the League of Women Voters are sponsoring two solar informational meetings on Oct. 13: at 10 a.m. at the Gardens branch of the Palm Beach County Library, 11303 Campus Drive, Palm Beach Gardens, and at 2 p.m. at the Wellington library branch, 1951 Royal Fern Drive.