Sargassum clogs a harbor along the shore of Guadeloupe. The windward sides of the islands are much harder hit than the leeward sides. French America Climate Talks

A natural disaster has hit the Caribbean. Barbados has declared a national emergency, and the sprawling St. James Club resort in Antigua has been forced to temporarily close its doors and direct guests elsewhere. Marine experts are looking at damaged coral reefs and sea turtle mortalities.
And Puerto Rico has another emergency on top of last year’s catastrophic hurricane damage.
In a region with its share of hurricanes, active volcanoes and earthquakes, the Caribbean has a new problem, one never seen before 2011 — sargassum.
The seaweed is being dumped by ocean waves on some of the most beautiful beaches in the world, and it’s arriving faster than it can be removed. It’s clogging waterways, shading coral reefs and killing marine mammals that drown underneath its thick mats stretching for miles.
And this is happening in a region that generally has very little seaweed.
Sargassum has always been in Florida, the Bahamas and other islands. But scientists are alarmed at research that shows the seaweed piling up on shores since 2011 is not the same plant as that in the past, which arrived at predictable times of the year from the Sargasso Sea. This new species is coming from the south near Brazil and is quickly spreading on ocean currents that are deviating from normal patterns.
The Caribbean islands worst hit are Barbados, Guadeloupe, Antigua and Martinique.
Mexico’s Riviera Maya is also seeing massive amounts of seaweed.
Residents, hotel employees and military personnel are being called on to clean the beaches by rake and wheelbarrow to preserve sea turtle nests and the area’s famous white sand. 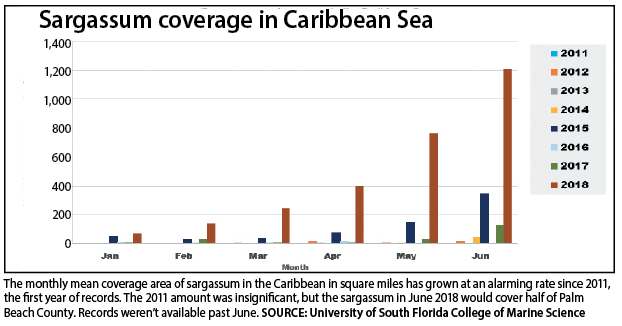 Beyond the beaches, the bigger picture is even worse: Satellite imaging shows the seaweed growing and spreading over a swath of ocean from Brazil to West Africa and north to Florida, a new and troubling phenomenon.
“We saw it for the first time in 2011. It was really bad in 2014 and 2015. This year is the worst, with no end in sight,” Dr. Hazel Oxenford, professor of fisheries and marine ecology at the University of the West Indies in Barbados, said in late July.
“It’s essentially a natural disaster with long-term effects on fisheries, coral reefs and sea grasses. We’re looking at some significant problems,” she said.
Marine scientists were surprised by this seaweed, which hadn’t been seen in the Caribbean in the past. Researchers at first assumed it had drifted south from the Sargasso Sea in the North Atlantic, where the open-ocean seaweed is generally found. But satellite imagery and ocean current data showed an unusual stretch of sargassum off the coast of Brazil.
Dr. Jim Gower, a remote-sensing expert with Fisheries and Oceans Canada, Institute of Ocean Sciences, tracked the sargassum and by 2013 he had reached a conclusion: Satellite observations showed the seaweed event of the summer of 2011 “had its origin north of the mouth of the Amazon in an area not previously associated with sargassum growth. … By July it had spread to the coast of Africa in the east and to the Lesser Antilles and the Caribbean in the west,” he said in a report published in The Journal of Remote Sensing Letters.
Dr. James Franks, a fisheries biologist, and his colleagues at the University of Southern Mississippi Gulf Coast Research Laboratory came to the same conclusion about why a once seaweed-free part of the ocean is now filled with seaweed. Tracking the seaweed mass-blooming events back in time showed its path from the tropical Atlantic east of Brazil.
“Invariably, in all of those instances, it tracked back to the tropical region (Brazil). None of it ever tracked northward into the Sargasso Sea,” Franks told Science Magazine in June 2018.
In the Caribbean, islanders were stunned and bewildered by the piles of sargassum as much as 6 feet high dumped on their beaches. They hoped it was a one-time event, but that wasn’t the case.
Sargassum, which is essential for sea turtle hatchlings that ride the ocean currents on the nutrient-rich mats in the first few years of their lives, is now a danger to turtle hatchlings on land, where the seaweed smothers nests and poses obstacles on their beach path to the ocean.
“The Barbados government declared an emergency and is using military personnel to help. Removing it requires a tremendous amount of manpower. They are using appropriate methods, not machinery but rakes, to preserve turtle nests and sand,” Oxenford said.
In the ocean, turtles and marine mammals can’t surface and may drown under the thick seaweed, a new species that has larger blades than seaweed usually seen in the Sargasso Sea.
“We have had a few mortalities (of turtles) this year,” Oxenford said. “But we have very active conservation groups that are helping.”
She and other scientists are studying the sources and causes of this new sargassum, which has marine researchers scrambling to understand it.
“It’s a new source of sargassum. It’s not from the Sargasso Sea, but from Brazil and West Africa. It’s coming at the whim of the ocean currents and trade winds, which normally have a pattern,” she said.
Ocean currents are deviating from normal, another mystery that is alarming scientists.
“There’s been tremendous variation in the ocean current patterns,” Oxenford said.
No one knows with certainty what is causing the massive seaweed bloom, but there are educated guesses.
“The causes run a whole gamut, with a combination of higher water temperatures caused by climate change, higher nutrient levels, and pollution from deforestation and industrial development,” Oxenford said.
The one bit of good news is that the sargassum is piling up on the windward side of the islands, and most hotels in the Caribbean are on the calmer leeward side. Hotels have temporarily closed — this is the second time since 2011 that the St. James Club has closed (from July 1 to Oct. 1 this year) because of seaweed — but luckily the sargassum hit at a time when Caribbean hotels traditionally close for renovations.
To make matters worse for the big resorts on the windward side, most are located on bays and coves, which quickly get choked by the seaweed piling up in the waterways and blocking passage for boats.
No one can predict how long this seaweed event will last or how bad it will be in the future.
“We’re not going to get it stopped in a hurry. It’s a long-term problem. It would be like stopping hurricanes,” Oxenford said. “We have to learn to adapt.” 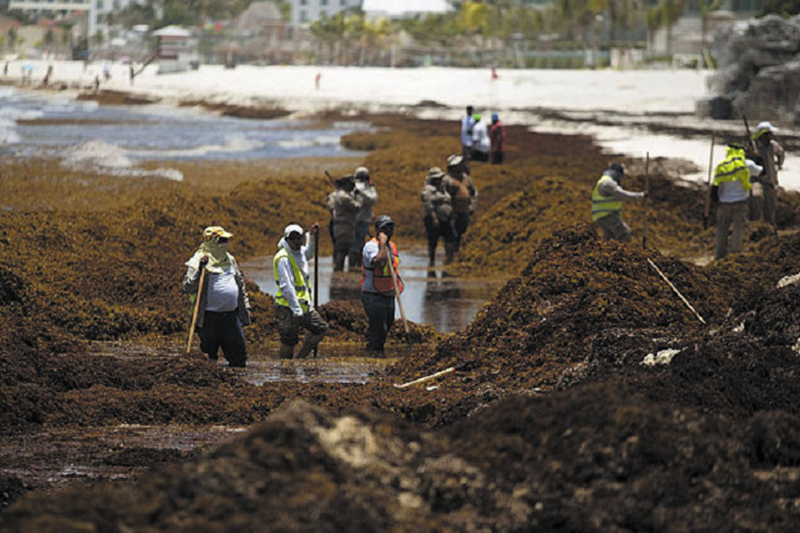 Crews work to rid the beaches of Cancun, Mexico, of seaweed. In Mexico, residents, hotel employees and military personnel have been called on to clean the beaches by rake and wheelbarrow to preserve sea turtle nests and the area’s white sand. Reuters

Dealing with sargassum
The Antigua Hotels and Tourist Association and the Caribbean Hotel and Tourism Association have released a guide for residents and hotels dealing with the sargassum crisis.
Some of the suggestions:
• Leave or bury the sargassum on the beach.
• Use rakes and wheelbarrows to gather and transport the sargassum, being careful not to disturb sea turtle nests.
• Incorporate sargassum into landscaping after it’s cleaned of sea salt. It provides a nutrient-rich source of compost, fertilizer and weed control.
• Eat it. After it is thoroughly cleaned, it can be cooked in lemon juice and coconut milk: “The most popular preparation is a quick fry, followed by simmering in water, soy sauce and other ingredients.”