Influx may be ‘new normal,’ force beachgoers to adapt 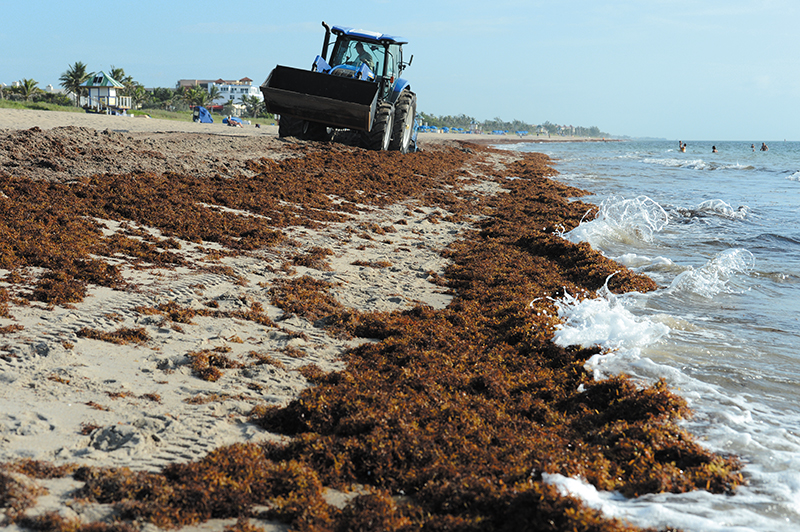 Scientists say sargassum, a golden-brown seaweed, is overwhelmingly a beneficial and essential part of the environment.
But what had been a small scattering of seaweed in summer months years ago is now piles of seaweed arriving on beaches starting in winter. When the sargassum rolled onto Florida beaches in early February, some snowbirds were irate.
The seaweed is ugly, it smells, it brings plastic and other trash tangled in the mats, say beach residents, and it mars the white beaches that are Florida’s tourism bread and butter. Others are worried that the seaweed is disturbing turtle nests. So far it hasn’t.
To make matters worse, a new species of sargassum is piling up on South Florida’s beaches, and that isn’t good news for beachgoers.
Scientists have confirmed there are now three species of sargassum coming from two places, not just the traditional species originating in the Sargasso Sea — which means there’s a lot more of it.
Two species ride the currents from the Sargasso Sea in the North Atlantic to Florida, but the third species comes from the equatorial Atlantic. This sargassum, which has thicker mats and broader leaves, first arrived in 2011, the result of an enormous, unprecedented seaweed bloom that now stretches from Brazil to Africa and up to the Caribbean and Florida.
“This seems to be somewhat of a new normal, and we don’t know how long it might go on. But the world is changing,” said Dr. Amy Siuda, assistant professor of marine science at Galbraith Marine Science Laboratory, Eckerd College in St. Petersburg. “It likely has to do with climate change, and we have to adapt as humans to these changes. Unfortunately, that might mean our beaches don’t look the way they used to. We need to figure out how we can use the beaches in a new form.”
From the Dune Deck Cafe in Lantana in late June, diners watched 6-foot-wide floating mats of seaweed coming in like an invading army from as far as the eye could see. Swimmers navigated around them, and snorkelers tried not to get underneath the thick tangles.
Some want the seaweed hauled off ASAP. Others appreciate the fact that it helps keep expensive sand on the beach and will collect even more sand.

Cleanup can be exhausting
Clayton Peart hears it all. His family has owned Universal Beach Services in Delray Beach since the 1970s. He picks up the sargassum and painstakingly separates the trash from the seaweed, and then takes the plastic and other trash to recycling. But the seaweed can pile up again hours later and certainly by the next day.
Beachgoers often give him a thumbs down as he works, not realizing he has permits from the Florida Department of Environmental Protection and Florida Fish and Wildlife Conservation Commission, which are looking over his shoulder. He is also working with groups that monitor sea turtles. They text him shortly after dawn when they survey the beaches, mark the turtle nests and give him the OK to start work.
“It’s almost like you have to be there around the clock. It’s exhausting,” says Peart. He buries the seaweed in the tideline and fills in low spots where escarpments have been formed by beach erosion.
He encounters all kinds of trash that comes in with the tide. He has picked up thousands of bottle caps, cigarette butts, plastic in every form, shotgun shells, flares, broken up sailboats, car tires and a rusty all-terrain vehicle.
“A couple of days ago, a wedding party left fake flower petals and candles all over the beach,” he says. The party was on Delray Beach.
Lately, as he cleans behind condos and hotels from Boca Raton to Palm Beach and other South Florida beaches, he has seen beachgoers picking up trash with him, and he is getting an occasional thumbs up. He asks that the beach cleaners leave it in piles so it’s easier for him to pick up.
“People say I’m causing erosion, but it’s the opposite. I am being a caretaker,” he says. 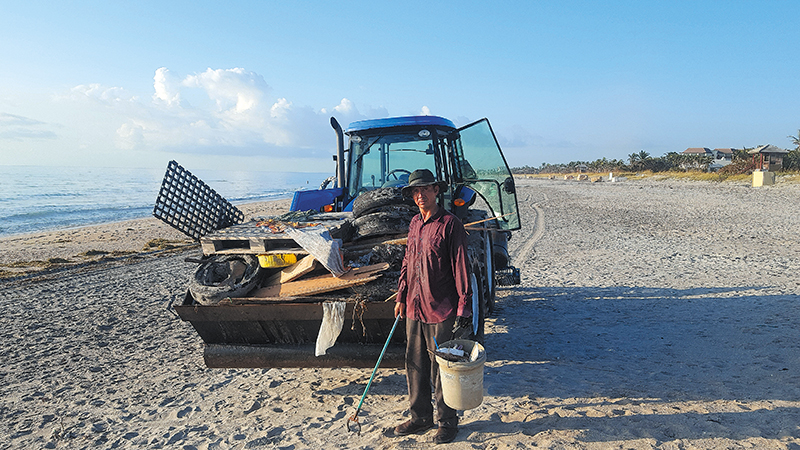 Universal Services driver Alcides Rodrigues shows a day’s load of trash that he picked up at Delray Beach. On days with lots of trash, a temporary worker helps out. Photo provided

Cleanup is expensive, and with more and more sargassum arriving every year it is requiring herculean manpower to keep up with it. The City of Delray Beach pays $79,000 per year for beach cleanup, according to a city agreement.
Most agree the seaweed should be buried or removed if it is rotting and emitting noxious fumes. Scientists are working on ways to use it as biofuel, fertilizer, mulch and food.
The other option is to do nothing or just enough to protect turtles and try to educate people about Mother Nature. When it concerns beach-loving tourists, most beachside towns would say that’s not an option.
One place that sargassum is left alone is Bahia Honda State Park in the Florida Keys. On Valentine’s Day, the sargassum was 6 inches thick on the Atlantic beaches, but visitors, including French and Italian tourists, didn’t seem bothered by it. They spread beach mats on new golden seaweed, walked the sandy tideline, and photographed seabirds feeding in the seaweed on the beach.

Essential to sea turtles
But these tourists are largely different from those on hotel and condo beaches in Palm Beach County. Those in the state park are there to see nature, which on this visit included sargassum. Rangers tell them the benefits, including that it’s a lifeline for sea turtle hatchlings that travel the ocean on sargassum the first two years of their lives.
“We’ve been pleasantly surprised at people’s reactions after we explain that it’s a natural phenomenon,” says Donald Bergeron, Bahia Honda State Park manager. “We monitor the loggerhead and green turtle nests and haven’t seen any problems with sargassum covering the nests or hatchlings having trouble going over the seaweed. We have cycles of seaweed — it comes in and goes out. Nature takes care of it.”
The turtles in Palm Beach County are also faring well in spite of the sargassum.
“It’s been a great nesting year so far. We’ve had some of the highest numbers since the 1990s, loggerheads in particular,” says David Anderson, sea turtle conservation coordinator at Gumbo Limbo Nature Center in Boca Raton. As of June 29, “we have 605 loggerhead nests and 145 green turtle nests. And we are just getting started with green turtles.”
Sargassum potentially can cover nests or impede hatchlings on their path to the ocean, but there have been no problems so far, he says. “The turtles are big animals, with mothers weighing 300 pounds or so. It doesn’t bother them at all. They will plow right through in order to get on the beach.”
Turtle monitors are out every day at sunrise to check for mother and hatchling turtles’ tracks on a 5-mile stretch of beach between the Highland Beach border and the border with Deerfield Beach. Nests are checked during the two-month incubation period, and sargassum is brushed off during the last month if it covers a nest. “Then we text beach rakers and give them the go-ahead. The beach rakers are all well-trained to steer clear of nests,” he says.
Anderson and Dr. Siuda want people to keep in mind that sargassum is essential for sea turtles’ survival in the ocean. Siuda compares sargassum to a coral reef.
“Coral reefs are this unique community in the ocean and so is sargassum. It hosts nursery turtles. It serves as a feeding habitat. You’ll find mahi-mahi and tuna around it feeding on the smaller fish, which are feeding on the organisms that live within the sargassum. They’re feeding in the open ocean where food is sparse,” she said.

Thriving in changing seas
Siuda and colleagues discovered the new type of sargassum by finding that the community of organisms living on it was from the equatorial Atlantic. “It has a genetically different population of organisms,” Siuda said.
They also found that this particular seaweed does not exist in the Sargasso Sea. “It doesn’t seem to be able to survive. It may be too cold,” she said.
This new sargassum appearing on Florida beaches has been in the equatorial Atlantic at least since the 1930s, although research shows it was rare, she said.
“And then something changed to allow it to bloom in such abundance. Whether that is increased nutrients from the Amazon or increased upwelling at the equator bringing nutrients to the surface, we don’t know yet,” Siuda said.
Meanwhile, beachgoers may need to look at sargassum as far more friend than foe.
“If people understand the importance of sargassum in the ocean environment, then they might be a little more understanding of it, and a little more protective of it coming up onto the beaches,” she said.