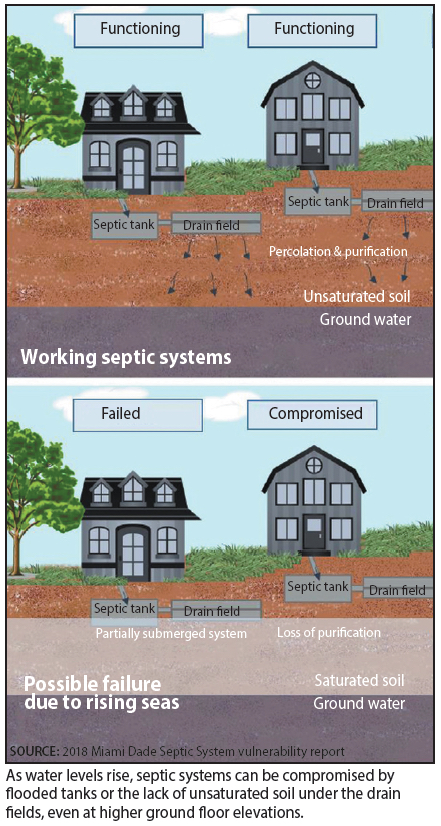 Sea level rise isn’t just coming, it’s already here.
Sea levels in South Florida rose an average of 3 to 5 inches between 1992 and 2015, according to estimates from the Southeast Florida Regional Climate Change Compact, and are expected to rise another 3 to 5 inches by 2030.
The impact can be seen on coastal streets that flood during high or king tides and on beaches where storms like Hurricane Dorian eroded the sand and pushed the ocean closer and closer to the dune line.
“Seasonal high tides are already higher than they’ve been in the past,” says Rebecca Harvey, Boynton Beach’s sustainability coordinator and the steering committee coordinator for the Coastal Resilience Partnership, which includes eight coastal south Palm Beach County communities.
What most of us won’t see is the impact sea level rise is having underground. There, aging centralized sewage treatment systems and older septic systems — some dating back to the 1960s — are interacting with rising groundwater.
For centralized sewage treatment systems, rising groundwater brought on by sea level rise will mean the potential for groundwater and stormwater to enter into pipes, forcing the systems to treat more water than planned. That could overwhelm the capacity of treatment plants and is likely to increase the cost of treatment, which would be passed on to users of the system.
“It costs more money to treat, which means everyone pays more,” said Colin Groff, Boynton Beach’s assistant city manager for public services.
Already municipalities are preparing for rising groundwater by lining pipes and enhancing lift stations to make them less susceptible to rising water levels.
Sea level rise and the interaction between septic systems and rising groundwater is even more problematic.
Simply put, sea level rise reduces the area of unsaturated soil between the bottom of a septic system’s drain field and the groundwater. That means there is less soil for the sewage effluent to percolate through. With reduced percolation, more nutrients — and more fecal coliform bacteria — can make their way into groundwater.
“During times of elevated groundwater levels, septic systems cannot function as designed,” concluded a report produced by Miami-Dade County and released in November. “Improperly functioning septic systems can pose an immediate public health risk. There are also many financial and environmental risks, including contamination of the freshwater aquifer, which is the community’s sole source of potable water.”
People who study climate change say municipalities can take steps to mitigate the problems. Although those steps vary greatly for centralized systems versus on-site treatment systems — septic tanks and package plants — they have a common denominator.
All cost money, and that might not always be easy to come by — in part because what’s underground is not always top of mind.
“If people aren’t seeing the impact, they may be less willing to pay for the infrastructure that’s necessary,” said Katie Hagemann, Miami-Dade County’s resilience program manager for adaptation and one of the contributors to the report.
Miami-Dade, perhaps ground zero for sea level rise in Florida if not the country, is focusing on reducing the number of parcels with septic systems — estimated at more than 105,000. 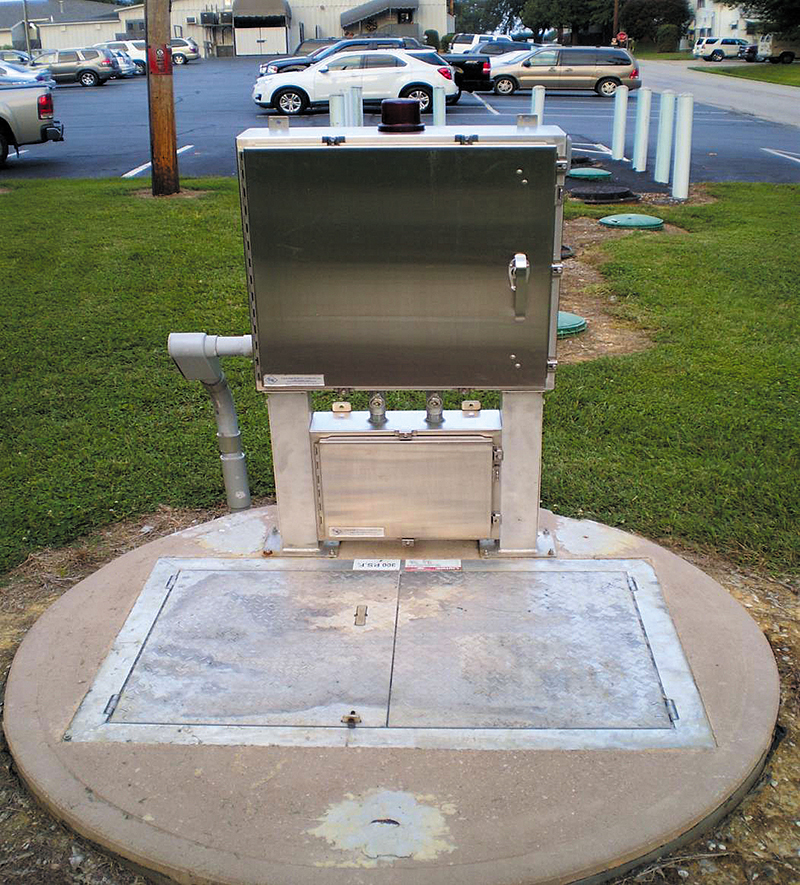 In preparation for sea level rise, municipalities can take a lift station such as this one and raise it more above ground, protecting the electrical panel inside the dark box from water damage. Photo provided

Sea level rise and centralized systems
With groundwater levels increasing as a result of sea level rise, municipalities in south Palm Beach County are taking steps to keep their systems operating efficiently.
Among the challenges facing centralized systems is the possibility of water from the outside entering into the pipes through ways known as inflow and infiltration.
Although pipes in utility systems are often already immersed, increased groundwater can put additional pressure on gravity lines and that can result in more water entering the system through cracks or ruptures, Groff said.
That infiltration could result in hundreds of thousands of gallons of water that doesn’t need to be treated entering the system every day. That would mean pumps having to operate more frequently to push water through sewage systems and centralized plants having to do unnecessary treatment that would stress their capacity.
“If you don’t deal with it at the source, it can create a domino effect,” says Chris Helfrich, director of utility services for Boca Raton.
To prevent intrusion, some local municipalities are lining older pipes with a thin epoxy-infused fabric that expands and hardens into a rigid liner.
Another issue facing centralized systems is the inflow of stormwater from the surface through manholes. As streets flood during heavy storms or king tides, water can seep into gravity lines through holes in manhole covers. Those holes are necessary in most cases to allow gases from the lines to escape.
In an effort to minimize inflow, some municipalities such as Boca Raton add a bowl-like device into the manhole to catch stormwater.
Local utility systems are also taking steps to prevent water from entering lift stations by raising the concrete tops and electrical panels higher above ground.
The cost to do both is minimal, Helfrich said.
Although it’s possible for rising groundwater to push pump stations up, buoyance issues aren’t common, Helfrich said, in part because water in the wet wells of the stations adds weight.

Sea level rise and on-site treatment systems
Sea level rise, at some point, likely will have an impact on how well many of the 50,000-plus septic systems in Palm Beach County work, especially those closest to the ocean.
“On the barrier island there could be a big problem with on-site systems, whether septic systems or package plants, because it doesn’t take much for them to be under water,” Groff said.
In conventional septic systems, effluent from tanks enters into a drain field and then percolates through soil where many of the nutrients, such as nitrogen, as well as fecal coliform bacteria, are removed naturally before the effluent reaches the groundwater.
Florida requires that the layer of unsaturated soil — the area between the bottom of the drain field and the top of the water table — be 24 inches deep. As groundwater rises, however, according to the Miami-Dade County report, that layer of soil may no longer meet the depth requirement in many parts of Miami-Dade.
The report best explains how rising sea levels will affect that process and cause septic systems to malfunction.
“Because much of the treatment of wastewater relies upon the unsaturated soil below the drain field, treatment and disposal are less effective as more of the soil becomes permanently saturated with rising groundwater resulting from sea level rise,” the report says. “A higher groundwater table reduces the volume of soil available to treat and dispose of the wastewater, which increases the likelihood of failure and contamination.”
One of the challenges with septic systems is that failure is not always easy to detect. Toilets will still flush and homeowners will be unaware that groundwater levels are too high to ensure effluent is effectively treated. In some cases, if groundwater levels are extremely high, residents may notice squishy wet spots on their lawns.
“If you can’t see it, chances are you don’t know it’s happening,” said state Rep. Mike Caruso, R-Delray Beach, whose district includes parts of coastal Palm Beach County.
Researchers who put together the Miami-Dade County report, which was sparked by a request from a county commissioner and is one of the few comprehensive reports examining sea level rise and septic systems, estimate that more than half of the septic systems in that county are periodically compromised during storms or wet years.
That number is expected to rise from 56% now to about 64% by 2040, according to the report.
While drinking water provided by public utilities is not threatened by failed or compromised septic systems because of the disinfectant process, well water can easily be contaminated. 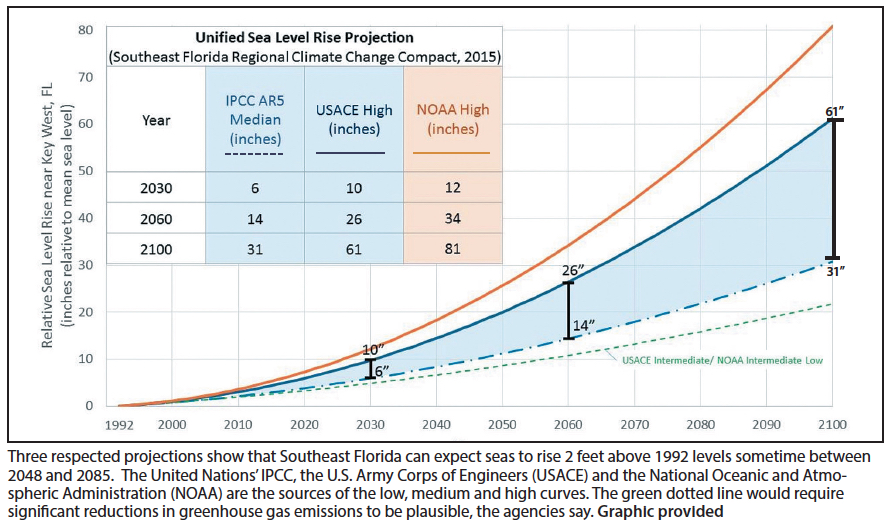 Preparing for sea level rise
Throughout South Florida local governments are preparing their centralized systems for sea level rise. Most municipalities are using the latest technology to examine sewer pipes to make sure they haven’t been damaged by tree roots, corrosion or age.
In south Palm Beach County, municipalities formed the Coastal Resilience Partnership and received grants to help cover the cost of a comprehensive climate change vulnerability assessment. The eight area governments that have signed an agreement to pay for the cost of the study are Boca Raton, Highland Beach, Delray Beach, Ocean Ridge, Boynton Beach, Lantana, Lake Worth Beach and Palm Beach County.
While most communities are being proactive, they still face challenges — one of the biggest being the expense of preparing for an event with a timeline that is difficult to identify.
“There’s a need to work before we see the impacts and we’re not able to predict how soon those impacts will come,” Hagemann said.
In fact, the Southeast Florida Regional Climate Change Compact — a collaboration including representatives from Palm Beach, Broward, Miami-Dade and Monroe counties — is in the process of updating projections on how soon seas will reach certain levels.
One factor to consider in doing those calculations could be the increasing prevalence of strong tropical systems approaching the coast.
A recent study conducted by the National Oceanic and Atmospheric Administration concludes that sea level rise combined with tropical storms could create even greater problems for septic and sewer systems because the two together will push more water into coastal areas than either one would individually.
In Miami-Dade, conversion from septic to centralized sewer is perhaps the most viable option, and the county is looking at how to pay for it and where to begin.
In Ocean Ridge, where residents depend on septic systems and package plants, a Septic to Sewer Citizens Advisory Committee is looking at the feasibility of converting to a centralized system.
“It is obvious that action must be taken to protect our environment and quality of life in Ocean Ridge, but what action?” asked Vice Mayor Don MaGruder, who has been attending meetings of the coastal resiliency partnership.
In Gulf Stream, town leaders are asking their engineering consultant to look into the feasibility of septic-to-sewer conversion.
Caruso, who earlier this year sponsored an unsuccessful bill calling for periodic inspection of septic tanks, says the time for action is now.
“We need to rethink our infrastructure and make accommodations for sea level rise,” he said. “It’s expensive — but we can’t ignore it.”

More on sea level rise
The National Oceanic and Atmospheric Administration has an interactive website that lets you find a specific location and then allows you to see models of potential sea level rise.
https://coast.noaa.gov/digitalcoast/tools/slr.html