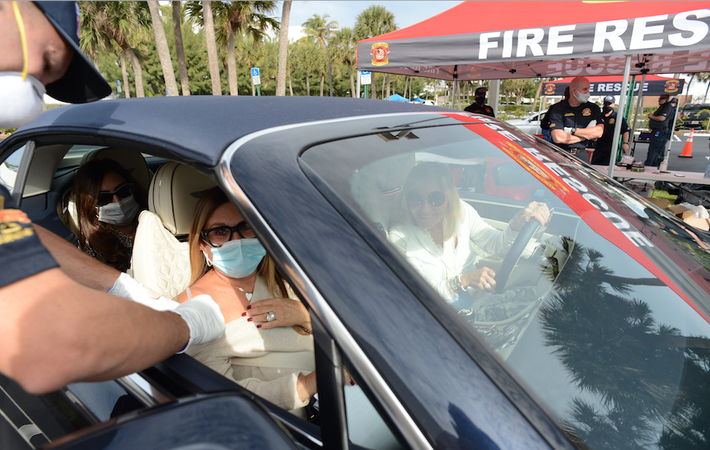 Highland Beach resident Debbie Miglis was one of the first town residents to receive a shot on Jan 15. She was accompanied by two of her friends. Jerry Lower/The Coastal Star

As cities and towns in southern Palm Beach County scrambled to get COVID-19 vaccines into the arms of their residents, most people rushing to make online appointments left frustrated by the inability to secure a precious time slot.

It took less than 60 seconds for 150 appointments to evaporate in Delray Beach as scores of mostly seniors flooded the sign-up web address.  It took just 97 seconds for 50 open appointments in Highland Beach to vanish. In Boca Raton, 200 appointments were gone within three minutes.

Those who were able to get through got their shots quickly. By the end of the day Friday, about 400 people got a shot in either Boca, Delray or Highland Beach.

Local officials said the process went quickly with most residents in Delray Beach and Highland Beach getting the shot while sitting in their cars. Those receiving a shot in Boca went into a city building.

“Within 24 hours of receiving the vaccine, every shot was in somebody’s arm,” said Chris Bell, Delray Beach’s emergency manager, who coordinated the effort in Delray and Highland Beach.

Among those receiving the vaccine in Highland Beach were Linda Weissman, 78 and her husband Michael, 81.

“We feel blessed to have gotten the shots,” Linda Weissman said.

One of the rare husband and wife couples to both get the vaccine, the Weissmans of Highland Beach said they enlisted their seven grandchildren to go online when appointment times became available.

Others said they just had good luck when it came to getting an appointment.

“I feel like I won the lottery today,” said Debbie Miglis, 65, whose husband got her an appointment but was unable to get one of his own.

Overall, residents said they were pleased with the ease of getting the shot once they had an appointment.

“This was run exceptionally well,” said Boca Raton resident Joan Lerner, who rushed to get a vaccine because her husband’s health is compromised. So far, he has not been vaccinated.

Still, the challenge for local governments wanting to meet the demand is the continued scarcity of vaccines.

“Right now, the demand for shots is far outpacing the supply,” said Delray Beach Fire Rescue Chief Keith Tomey, whose department vaccinated people in Delray and Highland Beach. “We have only 200 doses and thousands of people who want them.”

Tomey said the process of signing up for appointments went smoothly on Thursday but still the inability to get an appointment led to frustration.

In Boca Raton, some residents took to the city’s Facebook page to let off steam, complaining that they didn’t see emails from the city regarding the signups and also expressing frustration over the small amount of vaccine available. One person called the appointment process a “degrading and a horrible frustrating failure.”

That sentiment was also apparent in Highland Beach where a small number of residents called to voice concerns about not being notified of the process and of the difficulty getting an appointment.

“We share in their frustration,” said Town Manager Marshall Labadie. “We just wish we had more supply but we have to wait for state and federal government.”

Highland Beach, which contracts fire and paramedic service from Delray Beach, received about 50 of the 200 doses of the Moderna vaccine that Delray was allotted.

In Boca Raton, which also received the Moderna vaccine, Mayor Scott Singer expressed concern over the lack of availability.

“We continue to press for more vaccine,” he said. “This is a start. It’s not enough but it’s better than nothing.”

Like their counterparts in other area communities, Boca Raton officials have been repeatedly in contact with county and state leaders hoping to secure vaccines.

“We don’t control the allocation of the vaccines but we’ve made it be known that we stand ready to get vaccines out there if we receive more, as have many private entities in our city.”

Local departments are hoping to hear early next week if more vaccine is available and if they’ll be able to provide more shots.

In Boynton Beach, which provides fire service to Briny Breezes and Ocean Ridge, officials announced Friday that they would be giving out 160 doses of the vaccine through the city website later that afternoon. Appointments were filled after 40 mintues. People able to make appointments will receive the vaccine at the Boynton Beach Senior Center on Jan. 21.

Highland Beach’s Labadie said he is hopeful that the success of what he calls a decentralized distribution system, in which vaccines are given in several local Points of Distribution as opposed to one large location, will lead to state and county officials increasing supplies.

“We plan to show that this is the best way to distribute the vaccine,” he said.

Delray Beach’s Tomey said that the success in both Delray Beach and Highland Beach showed that the distribution system was efficient and effective.

Highland Beach Mayor Doug Hillman said that by having local distribution sites, communities can make it easy for seniors who otherwise might have to drive long distances to areas they’re not familiar with.

In the meantime, Hillman urged patience and added a little perspective.

“This Moderna vaccine was only approved a month ago,” he said. “This thing is moving lightning fast.”

Tomey said he is hopeful the state will replenish the supply soon but in the meantime he urged residents to follow the same precautions that have been in place for months.

“Stay home if possible, and if not, wear your mask,” he said.