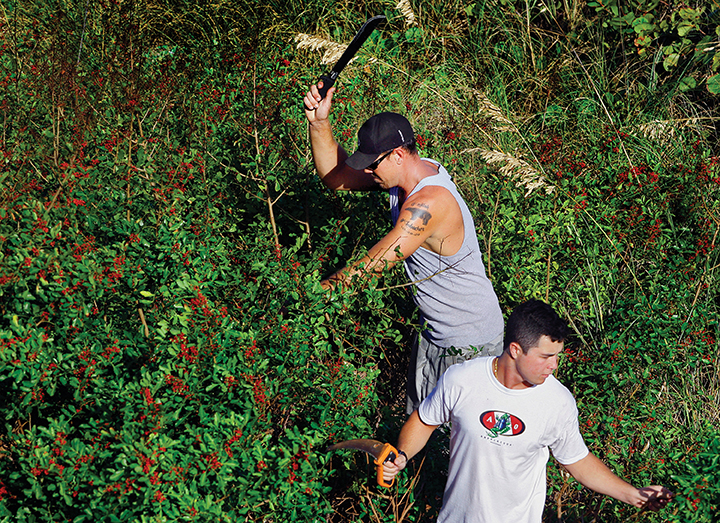 Nate Kinbacher, manager of The Bridgehampton, hacks away at invasive Brazilian pepper plants

along the dunes in Delray Beach. His friend Jason Davis assists. 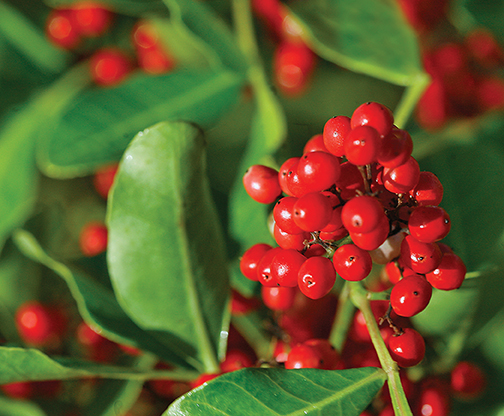 The berries of a Brazilian pepper plant.

Nonie Wyckoff of Delray Beach has taken it upon herself to help educate Floridians living along the dunes about how to eliminate the invasive plants that are destroying native vegetation and opening the sand to dangerous erosion.
“The invasives need to be removed to make the beach look better and to protect it as well as our homes,” says Wyckoff, who has owned her Bridgehampton condo for more than 20 years.
Her involvement started about a month ago when, by chance, she ran into dune biologist Rob Barron. A consultant for the city, he was walking the almost two miles of sand behind the town’s beachfront homes. He’d been hired to map the invasive plants in order to rewrite the city’s Comprehensive Dune Management Plan.
In talking to him, Wyckoff learned that the natural dune vegetation is under assault from invasive species.
And, of course, this is not only a problem in Delray Beach but all along Florida’s coast. In fact, about 387 of the state’s 825 miles of sandy beaches have experienced “critical erosion.” That’s enough to threaten development and recreation as well as cultural and environmental interests, according to the Florida Department of Environmental Protection.
And much of the problem can be linked to invasives replacing natives on the beaches because the natural greenery protects the beaches, dunes and homes behind them from storm damage and erosion. Those natives also provide habitat for coastal animals and can even help nesting sea turtles by shielding them from artificial light from the land.
“I couldn’t believe what he was telling me about the problems with invasives,” Wyckoff says.
So she not only talked to her fellow condo dwellers about undertaking an eradication program but she also contacted the neighbors.
“We feel the beach is something we should all look after,” says Debby MacInnis at The Southampton, next door. She admits to having noticed in the last two years that invasives are taking over the dunes behind her home.
So, after hearing from Wyckoff, she and her fellow condo dwellers met to discuss the problem and the possibilities. And now they are looking into turning their eradication project over to their landscape contractor.
But others are doing it themselves.
On Wednesday afternoons, you’ll find Nate Kinbacher, who manages and maintains The Bridgehampton, out on the beach swinging a machete and using a saw to whack and hack his way through the invasive plants. Once they are cut back, he drags them to where they’ll be picked up by bulk garbage collection.
“It’s hot sweaty work. But I’ve always had a green thumb and like being outdoors working with my hands,” says Kinbacher, who says it takes about three hours to clear 100 square feet of dune.
He goes after the non-natives Barron has pointed out as the four biggest culprits in this area.
Of course there are many more, but looking out over the dunes, one sees the shiny bright green leaves of the Hawaiian sea grape and the prickly nicker bean that can quickly grow 18 to 20 feet in length. There’s the Brazilian pepper, which has red berries that birds eat and then spread their seeds. And the prolific coin vine is aptly named for its seeds that look like, well, coins.
Soon the dunes here will be like those behind Delray Beach’s Fountain House where the owners have already cleared the exotics and are getting ready to plant sea oats, saw palmettos and other rare but native coastal shrubs.
With the invasives removed, some of the more than 170 native species you find on wild, natural dunes will have room and sunlight to thrive.
“There’s no obligation to homeowners to do anything about the problem of invasives. It’s just smart,” Barron says.