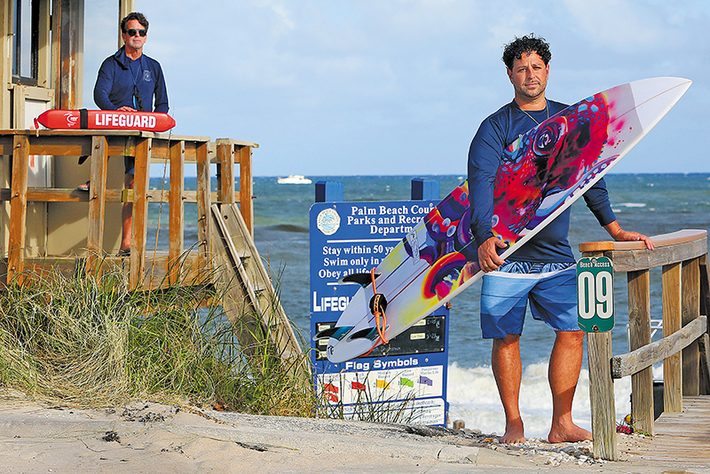 Bernard Micalizzi had a split-second life-or-death decision to make.
A veteran surfer, Micalizzi was on his multicolored board in the water just north of the Boynton Inlet waiting to catch a wave when he heard shouting and saw a commotion among fishermen gathered near the ocean end of the jetty.
As he peered down to the water’s surface, Micalizzi saw two teenage swimmers struggling to stay afloat while being pushed out to sea by a ferociously fast stream of water. One of the boys was grasping part of a fishing line, which was of little help.
A strong swimmer who’s usually comfortable in the water, Micalizzi, 42, of Boynton Beach, took off toward the two boys, paddling about 75 yards.
“I knew I was putting myself in harm’s way,” he recalled. “But I said, ‘What am I going to do, let them drown?’”
With the help of another surfer — who, with his board, jumped off the jetty to assist — and thanks to Palm Beach County Ocean Rescue lifeguards, Micalizzi and the two swimmers made it back to shore safely.
Micalizzi, who plucked one of the boys out of the ocean just as he was going under and rested him on his surfboard, is certain that swimmer would have been lost had Micalizzi not reached him then.
“His head was under water when I got there,” Micalizzi said. “Another two or three minutes and he wouldn’t have made it.”
One of the lifeguards — who helped Micalizzi and the second of the rescued boys fight the current and return to shore using an inflatable rescue boat — says the boys were lucky others came to their aid.
“If those surfers weren’t there and they didn’t help, it could have been a very different story,” said Palm Beach County Ocean Rescue Lt. William DeMartino. “This is a great outcome because somebody could have lost their life. The surfers that got in the water to help these people out are heroes.”

Particularly treacherous
While the October rescue — which occurred during an outgoing king tide and a full moon — was dramatic, it was far from being an isolated incident at the Boynton Inlet.
Over the years, several drownings or near drownings have happened at or near the inlet, including several in 2014 that led the county to post warning signs throughout the area.
County lifeguards assigned to the public beach south of the inlet say they are called on a half dozen or more times a year to rescue swimmers, and about the same number of times to rescue boaters thrown into the water when inlet currents capsize their boats.
By contrast, lifeguards estimate about half that number of rescues take place at the Boca Inlet — in large part because of their different configurations. The Boca Inlet, for example, is wider and more difficult to access by car or on foot than the Boynton Inlet.
“The Boynton Inlet is the most dangerous inlet in the universe,” says Lt. Brian McManus of Palm Beach County Ocean Rescue, who has been working in the area for more than 30 years.
McManus and others say a number of factors make the area so treacherous, ranging from swift-moving currents to the unprotected beach to the north of the inlet that’s popular with younger swimmers.
“There’s all kinds of dangers at the inlet because of the structures there and because people disregard the warning signs,” says Ocean Ridge Police Chief Hal Hutchins, whose officers assist the Palm Beach County Sheriff’s Office with enforcement of safety regulations.
A man-made channel, the actual inlet is sandwiched between two jetties, both of which are used for fishing.
It is a narrow channel, with a curve at the end that can create problems for boaters unfamiliar with the area.
There have been so many rescues of boaters in the water, in fact, that YouTube has an entire collection of videos of boating mishaps — some as recent as just a few months ago, as well as some from almost a decade ago.
“It’s long and narrow and the energy makes it more precarious,” says John Ferber, who lives on the beach in Manalapan, just north of the inlet. “There’s a multitude of different dangers in relation to the inlet.” 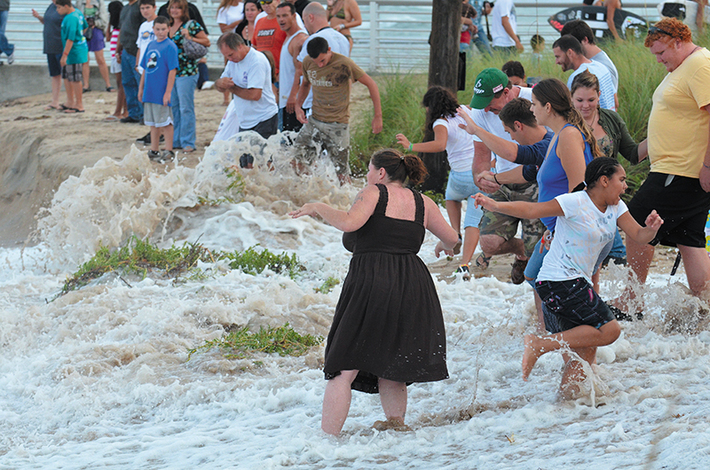 A crowd watches waves crash north of the Boynton Inlet as a result of Hurricane Irene in 2011. Jerry Lower/The Coastal Star

Weather can be a factor
Ferber lives not far from the unprotected public beach wedged between Manalapan’s private beach and the north wall of the inlet.
Swimming off of that beach can be dangerous during certain weather conditions, lifeguards say, and the problem is compounded by teenagers jumping off the jetty or off the sand transfer station.
Lifeguards say that when the wind is out of the northeast, water is pushed against the north jetty wall, creating fast-moving rip currents.
“The rip currents are formed when the water is pushed against an obstruction,” said Palm Beach County Ocean Rescue Chief Julia Leo. “They’re going to push someone out very quickly.”
Leo says that an especially strong rip current can push a swimmer out into the ocean as quickly as eight feet per second.
Compounding the problem is a deep pocket in the ocean floor created by the sand transfer station, which pumps both sand and water away from the north side of the inlet across the inlet to the sand-starved beach on the south side.
The inlet and the popular unprotected north-side beach also draw teenagers who disregard warnings and jump into the inlet from the State Road A1A bridge or from the jetty.
“We have some teens making bad decisions and jumping off the north jetty,” Palm Beach County Ocean Rescue’s DeMartino says.
Because the inlet and the north beach are in a county pocket, law enforcement in the area is the responsibility of the Palm Beach County Sheriff’s Office.
Ocean Ridge Chief Hutchins says that his officers and those of neighboring Manalapan work closely with the Sheriff’s Office while “discouraging” people who disregard the county safety warnings and regulations.
“Anyone who has jurisdiction to the south or north of the inlet understands the dangers and doesn’t turn a blind eye to the safety issues,” Hutchins said.

Making no headway
Micalizzi isn’t sure how the two swimmers he rescued ended up in the water, nor does he know how the grandmother of one of the boys ended up wedged against the jetty and needed help to get free.
He is sure that they were lucky that others were present to help them, including DeMartino and other lifeguards who arrived in an inflatable boat and helped Micalizzi and one of the boys get back to the beach.
Micalizzi says that after he pulled the first swimmer out of the water, he was able to get him onto the board of the other surfer who had jumped off the jetty. While they paddled to shore, Micalizzi headed to the second boy, who appeared to be a better swimmer.
With the young man on the board and Micalizzi swimming alongside, they headed for shore but couldn’t battle the current.
“I’m swimming and he’s paddling and we’re going nowhere,” Micalizzi said, adding that he feared the current would take them farther from shore. “I’m thinking this is really bad. Then out of nowhere comes Ocean Rescue to save the day.”
Micalizzi, who has been surfing for three decades, says he wouldn’t hesitate to come to the aid of swimmers in trouble again.
“Without a doubt,” he said.