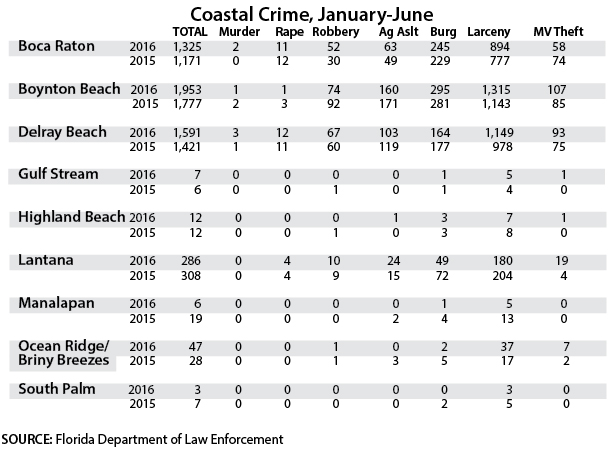 Crime remained low in south Palm Beach County’s small coastal communities during the first six months of this year, although a rash of thefts from unlocked cars led to a significant increase in reported crimes in one town.
In all, there were about 75 crimes reported in the five communities, according to the Florida Department of Law Enforcement, with larcenies making up the majority of those crimes.
The number of reported crimes in Manalapan and South Palm Beach declined slightly from the same period last year, while Highland Beach saw no increase. In Gulf Stream, one additional crime was reported.
Ocean Ridge, however, saw a big jump in the number of reported crimes, largely due to thefts from unlocked cars and the theft of some of those vehicles that had keys left in them.
Of the 47 reported crimes in Ocean Ridge, 37 were larcenies and seven were motor vehicle thefts.
Ocean Ridge Police Chief Hal Hutchins says that increased awareness among residents combined with increased efforts by his department have slowed the number of thefts from unlocked vehicles.
“It appears as if the trend has slowed in Ocean Ridge, although it seems to be continuing elsewhere,” he said. “Our education efforts to encourage residents to lock their cars and remove valuables — and keys — appears to be working.”
While the thefts from unlocked cars have slowed, Hutchins is still encouraging residents to take steps to secure their valuables, including calling police when they see something suspicious.
“Residents should continue to be aware of what’s going on around them,” he said.
While Ocean Ridge was hit by the thefts from cars, neighboring towns seem to avoid being targeted by criminals.
In Manalapan, the number of crimes reported dropped almost 70 percent, from 19 to just six for the six-month period. The number of larcenies dropped from 13 to five.
South Palm Beach reported the fewest number of crimes, just three larcenies, down from seven total crimes during the same period last year.
In the larger south county communities, Lantana reported a 7 percent drop in overall crime, while Boca Raton, Delray Beach and Boynton Beach all saw increases. Boca Raton, which reported two homicides, had an increase of 13.2 percent, while reported crime in Delray Beach, with three homicides, increased by 12 percent. Boynton Beach, which had one homicide, had an increase of about 10 percent.
As they were in Ocean Ridge, reported larcenies were up significantly in Boynton Beach, Delray Beach and Boca Raton.
Overall, Palm Beach County had a 3.7 percent increase in the number of reported crimes.