Collecting plastic in trek around state,
former lifeguard says recycling is not enough 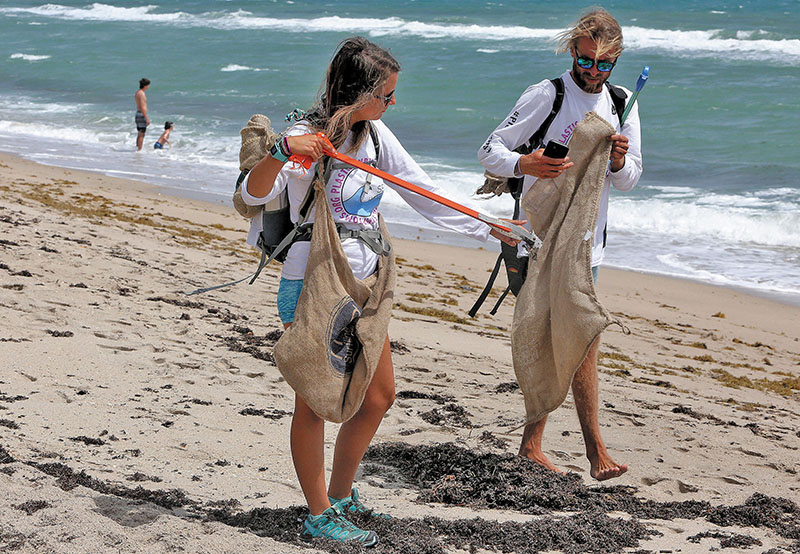 ABOVE: Bryan Galvin and Heather Bolint walk the St. Andrews Club beach in Gulf Stream last month as they pick up and photograph plastic and other trash on a three-month, 1,200-mile trek covering the entire Florida coastline. BELOW: The trekkers wear their message on their backs. Photos by Tim Stepien/The Coastal Star 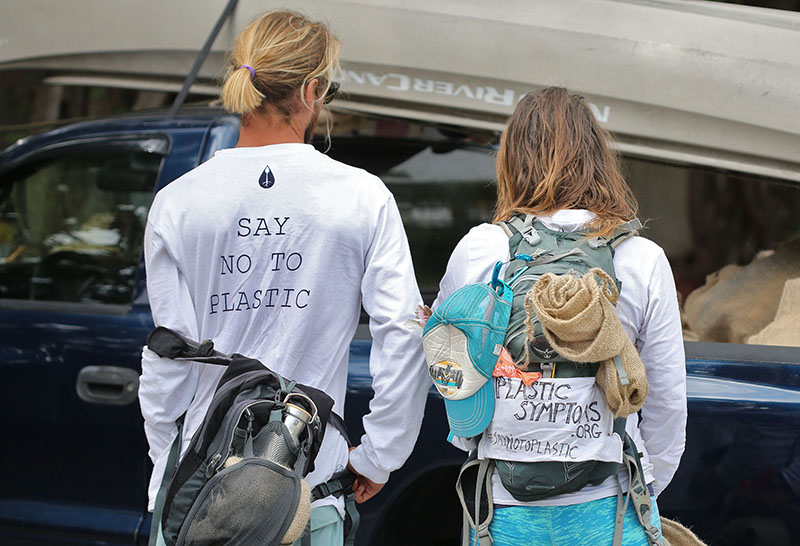 For four years, Bryan Galvin sat on the beach behind the St. Andrews Club in Gulf Stream, ready to rescue exhausted swimmers from unexpected riptides.
Galvin, 28, quit that lifeguard job in February, and on the morning of March 1 he started walking south from Amelia Island, near the Georgia line, on a 1,200-mile mission to rescue the beaches.
“This isn’t a beach cleanup,” he wants you to know. “It’s an awareness trek.”
PlasTrek 2019, he calls it.
Galvin and his fellow traveler, Heather Bolint, 32, are trekking the perimeter of mainland Florida, picking up as much plastic flotsam and jetsam as they can carry along the way.
On that first morning, they set forth in a blue Dodge Dakota with a canoe on the roof for paddling across inlets, 150 burlap bags and a smartphone to photograph plastic and other debris they salvaged from the sand.
Balloons, coffee cup lids, lollipop sticks — they’d snap a photo, drop the trash in the burlap bag and move on.
“If we find dog poop, we try to find the nearest trash can,” Galvin says. “Same with diapers. Condoms, we’re not going to touch them.”
They walk until sunset, store the day’s burlap gatherings in the dunes, then hitch a ride back to retrieve their truck and retrace the day’s trek to gather the full bags and find a place to spend the night before setting out again the next morning.
“We’re not sleeping on the beach,” Galvin notes. “We sleep in campgrounds or with local families. So far it’s been about 50 percent in motels and 50 percent families.”
Their original plan was to complete the 1,200 miles in 10 weeks and arrive in Pensacola by mid-June, then bring the burlap bags together for one final, giant photo of all the plastic they’d gathered along the way.
On Wednesday morning, April 3, they finally reached Gulfstream Park. This was day 34.
“We’re a week behind our original schedule,” Galvin said as he and Bolint rested on one of the picnic benches. “Now I don’t think we’ll be there before the end of June.”
Walking all day in the hot sun, bending down, photographing, lugging those bags then rushing to be back where you started by sunset to get your truck before the public parks close — and all to remind people not to litter?
“This isn’t litter,” Galvin says, perhaps a little offended by the word. “I felt people didn’t really understand, so I came up with the term ‘oceanic plastic discharge.’ This isn’t just beachgoers leaving stuff. It’s washing in on the beach.”
True, some of it’s litter, but he and Bolint are also finding vinegar containers from the Dominican Republic, Clorox bottles and Haitian water bags. The bags, small plastic pouches containing about 9 ounces of water, are plentiful throughout the island, where finding safe drinking water is a challenge.
“Most are from Cuba, the Bahamas, the Dominican Republic and Haiti,” Galvin says. “They pile their garbage on the beaches and they get washed out and wind up here.
“If the county told Palm Beach, ‘we’re not picking up your garbage anymore,’ what would happen?”
He gestures at his own plastic sunglasses. His argument is not with sunglasses, but with plastic products that are used once and discarded.
“This is about single-use plastics,” he says. “Aluminum cans are better, because aluminum has value. But plastic is cheaper, so it gets thrown away. Don’t just recycle. Reduce, refuse, rethink.”
So far, he estimates, they’ve tagged and collected enough plastic to fill about 80 of their 150 bags. They’re going to need more bags, and more time. 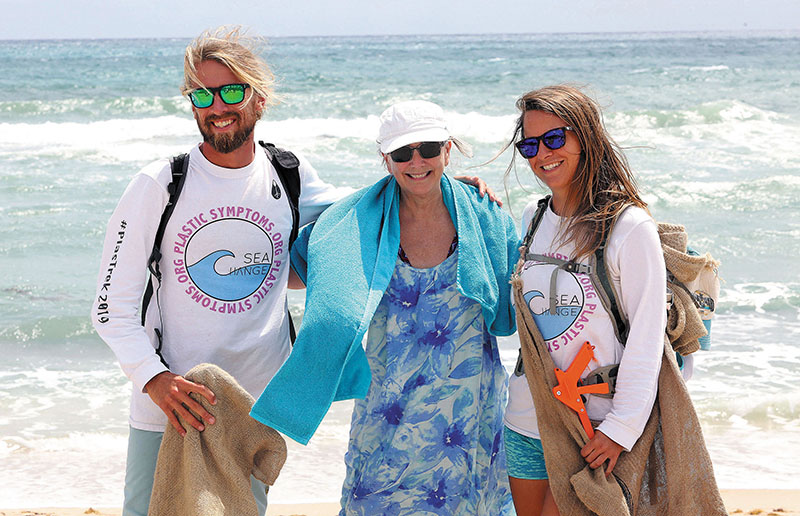 Bryan Galvin and Heather Bolint ran into old friends and acquaintances when they passed the St. Andrews Club, including club member Merritt Swenson (center). Galvin used to be a lifeguard and teach kids to surf in the area.

Most people are friendly and supportive, Bolint says. “People clap and say thank you.”
But this beach trek is no day at the beach.
They’ve each suffered a broken toe, and sometimes they’re their own worst company.
“Do we fight?” she says. “Oh, yeah. Traveling 24/7 with someone is challenging both physically and mentally.”
“We take time to make sure we’re on the same page,” Galvin says.
“Today we’ll be happy if we make it to Spanish River Park in Boca,” he says, and checks his phone. That’s an 8.9-mile trek, and they need to get moving.
And so they set out, leaving the truck at Gulfstream Park and heading down the beach again.
But in front of the St. Andrews Club, right where he used to sit in a blue canvas beach chair guarding lives, old friends are waiting.
Gary Heiland and Michael Buller, lifeguards and former colleagues, come down to greet him and wish them well.
Kim Tiernan, a club member for five years, is thrilled.
“He’s very well-liked at the club,” she says, “and this is a great testament to how much he believes in what he’s doing. We need more awareness.”
Teggie Smith, another member, is equally thrilled to see their former lifeguard.
“My grandkids went to his surf camp,” she boasted, “and now they’re following him online. It’s teaching them about having a commitment to something not everybody pays attention to. It’s teaching them that if you feel strongly about something, do something about it.”
They chat for five or 10 minutes, and then Galvin and Bolint are off again.
Within yards of the club, they find a piece of plastic from a Haitian water bag, straws, a lollipop stick and a plastic cigar tip.
They didn’t make Spanish River Park that day. They got only as far as Atlantic Dunes Park in Delray Beach. The next day they reached the Boca Inlet, and the day after that the Hillsboro Inlet.
“Our daily average at this point is 10 miles a day,” he reported on April 10, as they neared the final, 5-mile trek along Miami Beach. “We started out averaging 15 to 20 miles a day, but after Sebastian Inlet the plastics multiplied.”
In Miami, they would rest for a day, then tackle the 100-mile paddle across to Everglades City and turn north toward the Gulf Coast.
“We only pick up about 10 percent of all we see,” Galvin says.
As of April 29, Galvin and Bolint were in Everglades City, resting after an eight-day canoe trip across the Everglades.
Now they head toward Marco Island, then Naples, and up the Gulf Coast.
If all goes well, they will reach Pensacola, and the 1,200th mile of their PlasTrek, by the end of June.