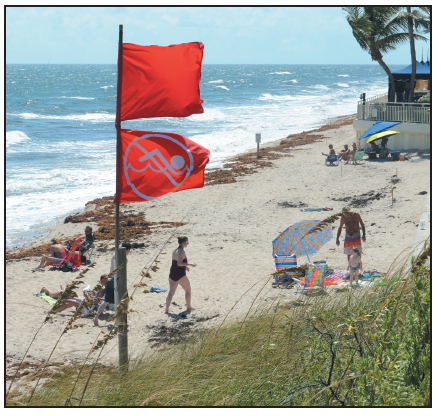 A no-swimming flag flies at the public beach in Lantana on Sept. 30 to warn people of an irritant blowing in on the wind and waves that caused respiratory issues and eye irritation. As a precaution, officials closed Palm Beach County beaches from the Martin County line to Lake Worth. Lantana followed suit, and other municipalities south of Lake Worth were monitoring the situation. Jerry Lower/The Coastal Star

A police officer handed South Palm Beach Mayor Bonnie Fischer a face mask to help relieve her burning eyes and sore throat when she walked on the beach.
During the last week of September, officials knew there was an airborne irritant from the ocean that was causing coughing and burning eyes in some beachgoers, but they didn’t know what it was.
The mystery was solved Oct. 1 when the Florida Fish and Wildlife Conservation Commission’s water tests, taken from 11 sites from the Palm Beach Inlet north to Jupiter Inlet, came back identifying the culprit.
Red tide had made a rare appearance on Florida’s southeast coast, its first since 2006-07.
The algae, which can cause a red tint in the water, have shown up only nine times since 1953 on Palm Beach County beaches (with cell counts of 100,000 cells/liter or more). On Florida’s Gulf of Mexico beaches, red tide has occurred 57 times during that time frame.
Public beaches from the Martin County line to Lake Worth were given health advisories from the Florida Department of Health in Palm Beach County on Sept. 29. South of Lake Worth, Lantana closed its beach to swimming after people complained of symptoms. Other municipalities were monitoring the situation, and Palm Beach County changed its mind about lifting advisories effective Oct. 3 after seeing that red tide conditions were forecast to persist. Broward and Miami-Dade counties also planned to test for red tide on their beaches.
This September appearance of red tide, like the previous eight occurrences on county beaches, originated in the gulf and was carried by currents through the Florida Straits and on the Gulf Stream to the East Coast, said Tim O’Connor, spokesman for the Florida Department of Health in Palm Beach County.
“The red tide is a few miles offshore and winds are carrying it in,” O’Connor said. “It looks like low concentrations. It breaks up as it comes in.”

People with health issues are warned off beaches
Red tide is caused by the karenia brevis algae common in the gulf. When it blooms in high concentration, it produces toxins that kill fish and water mammals, as has happened on Florida’s West Coast this year. Red tide can cause respiratory irritation such as coughing, tearing and sore throats in humans.
Officials say they can’t predict the future of red tides on the East Coast, but they don’t expect any fish and mammal deaths here this year.
“Red tides can even subside and then reoccur,” said Lisa De La Rionda, public affairs director for Palm Beach County. “The duration of a bloom in nearshore Florida waters depends on physical and biological conditions that influence its growth and persistence, including sunlight, nutrients and salinity, as well as the speed and direction of wind and water currents.”
People with respiratory problems such as emphysema or asthma were advised to stay away from the beach and those who live in beachside homes to stay indoors until the algae dissipates.
Residents should check with local towns to see if public beaches are open. Kevin Saxton, a spokesman with Delray Fire-Rescue, said the beach was open as of Oct. 1 but the city had an advisory in effect. Delray Beach lifeguards were still staffing the towers, unlike in Lake Worth where all entrances to the beach and upper-level parking lots were closed beginning Sept. 30.
Boca Raton was monitoring the situation. “Boca Raton Ocean Rescue has not had any reported complaints or incidents at this time,” said spokeswoman Chrissy Gibson.
Mayor Fischer, who lives in an oceanfront condo and has a history with South Palm Beach that goes back to 1974 when she visited as a child, said she was stunned to encounter red tide and forced to leave her condo.
“I’ve never seen anything like this. It took me by surprise. I couldn’t sleep at night and am not staying here,” she said Oct. 2.
She had seen just how bad red tide can be when she attended a beach preservation conference in Clearwater in September. “There were dead fish there with the red tide,” she said, but she wasn’t bothered as much physically then.
“This has been worse.”

Jane Smith and Dan Moffett contributed to this story.