Some materials that contractors pick up on Hypoluxo Island likely don’t belong in the recycling bins. Photos by Tim Stepien/The Coastal Star

For the first time in two years, Palm Beach County cities and towns are receiving a dividend from the recycling efforts of their residents.
A total of $141,612 is being portioned out by the Solid Waste Authority to the county’s 39 municipalities. The money may be little more than pocket change — Manalapan’s share comes out to only $137.09, for instance — but it means the county’s recycling efforts are once again paying for themselves. The revenue sharing takes place only after all the SWA program costs have been covered.
Ocean Ridge Mayor Kristine de Haseth says her town encourages recycling — it will even supply the blue and yellow bins to make it easier for residents rather than having them contact the SWA — in an effort to reduce the county’s waste stream.
Ocean Ridge’s share of the disbursement is $551.17.
“It has nothing to do with the revenue side,” de Haseth says. “It’s nice to get, but it doesn’t cover much, even for a small town like ours.”
Recycling programs around the world took a hit in 2018 when China, which was a major purchaser of the collected materials, became far pickier in what materials it would accept, particularly when it came to paper goods. Many places nationally ended up dumping recyclables in landfills because they could not find buyers, while those that could sell saw the value of their materials plummet because of the market glut.
At the same time, the SWA’s recycling costs increased because of the county’s living wage rules, which gave a roughly 50% hourly wage increase to recycling plant workers. The SWA plugged away, finding takers for its products, although the money it earned no longer covered expenses — at least not until this summer. 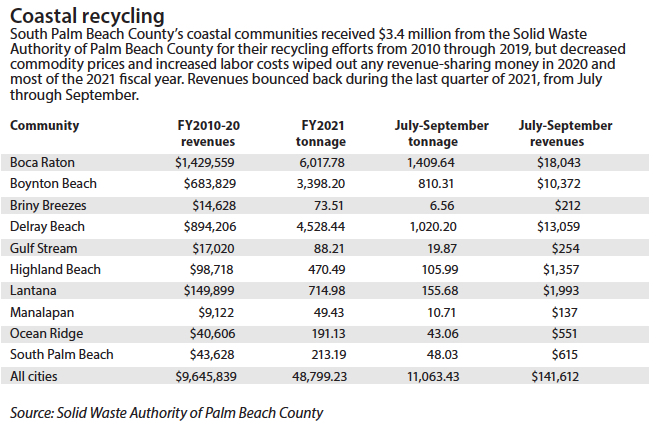 Recycling markets rebound
The good news is that many markets are rebounding, the SWA reports:
• Premium mixed paper, which fell from about $100 a ton in 2017 prior to China’s actions, to about $38 a ton in 2020, boomed to more than $140 a ton this year.
• Cardboard, which dropped from about $165 a ton to about $55 a ton, averaged more than $120 a ton this year.
• Even basic mixed paper, which went from around $88 a ton to $20 a ton, has climbed back to averaging about $38 a ton recently.
The value of some plastics — particularly the containers with “2” in their recycling triangles — weren’t affected as much, but they have also seen large increases this year. The SWA’s HDPE natural No. 2 plastic materials, including milk jugs, have averaged between $600 and $1,000 per ton in recent years, but averaged more than $1,600 a ton for 2021.
Unfortunately, there’s little way of knowing for sure whether the trend will continue or is a momentary blip.
“Market prices are market prices,” based on the vagaries of supply and demand, says Willie Puz, the SWA’s director of public affairs and recycling. “The recycling market is commodity driven, and the markets fluctuate up and down for a number of different reasons. So, what stands true for a commodity price one month, may be different the next month, may be different the next year.”

Saving landfill space
The main goal of recycling is not to turn a profit, but to save landfill space, he says.
“Recycling is done for a number of different reasons. From the Solid Waste Authority of Palm Beach County’s perspective, it’s also to decrease our reliance on a landfill. Any way that we can divert a specific waste stream, in this case it’s recyclables, it’s to our advantage, our county’s advantage,” Puz says. “There’s going to come a time when we will have to site a new landfill, and there’s not a lot of space for that landfill to go. … And you know there’s a lot of ‘not in my backyard’ for a landfill.”
When it comes to recycling, the county and its municipalities have room to grow, state Department of Environmental Protection data shows. Palm Beach County ranks fourth among counties and is close to the goal set by the state years ago of having three-quarters of its waste stream going to recycling, but that includes credits the county gets for burning trash to produce electricity at its waste-to-energy incineration plant. The traditional recycling portion is closer to 45%. 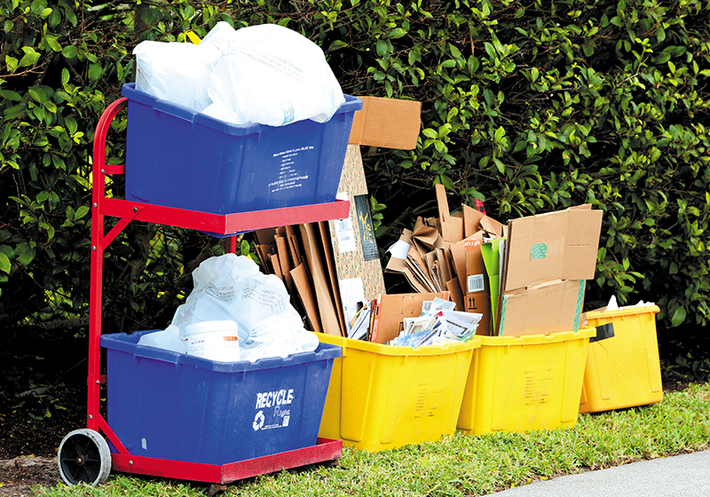 With the increase in online shopping, much more cardboard is being set by curbs like these collections on Hypoluxo Island. TOP: The boxes are cut and folded, ensuring they will be recycled. BOTTOM: The stack of whole boxes is more likely to end up in the trash and be burned in one of the county’s waste-to-energy incinerators. Recycle more, recycle right
According to the state data, there’s a lot more that residents and visitors could be doing.
The materials coming into the county’s recycling center account for only one out of every 12 aluminum cans disposed of here, only one out of 11 plastic bottles and less than a third of the office paper and cardboard that is being thrown away, the state says.
While the Solid Waste Authority wants to see residents recycle more, it also wants them to recycle right. That means being careful about what they put in their recycling bins, to make sure it’s a product the county actually recycles and that it isn’t contaminated. The county’s recycling guidelines don’t always match what people think is recyclable.
“You have a very high snowbird season, where we get hundreds of thousands of other residents, where they recycle differently somewhere else, and a lot of times they think they recycle better wherever they came from,” Puz says. “And you have the tourist visitors that we have. It takes us all to do the right thing to make recycling successful.”
Here are some things about recycling in Palm Beach County you may not know:
• Big pieces of cardboard and boxes that you leave at the curb to be recycled may end up being thrown into a garbage truck because some communities don’t have recycling trucks that can handle the larger pieces.
If the recycling truck on your street has side-loaders, where the materials have to fit into a hopper, the only way for recycling to work is to cut the cardboard down into smaller pieces that fit into your recycling bin first.
• Bottle caps are recyclable, but only if they’re attached to the bottles. The shredders at the recycling plant will be able to sort the cap plastic from the bottle plastic. Loose bottle caps are a big no-no. They’ll get stuck in the machinery and cause equipment breakdowns.
• Bring your plastic bags to grocery store recycling bins; don’t put them in the bins you put out on the curb. The plastic bags will get caught in the recycling machinery.
• Don’t put items in your recycling bins because you’d like to think they can be recycled: Styrofoam, packing peanuts, paper products having food stains on them, aluminum foil or aluminum pans, plastic eating utensils and plastic straws should all go into the garbage.
• Ropes, coat hangers, stringy material or anything else that could get tangled up in the recycling plant machinery should be left out of your bins.
“Recycling is not dead and residents should still recycle,” Puz says. “It’s most important for them to recycle right, per their local program.” 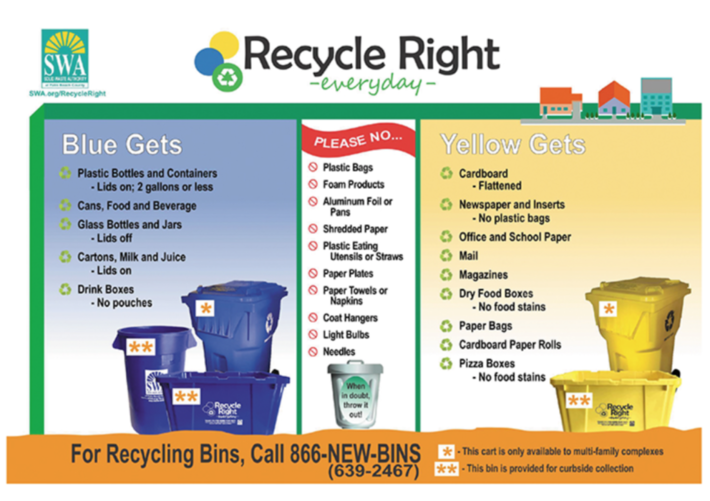