Property values in Boca Raton have jumped to an estimated market value of $26 billion for 2015, ranking first out of 38 municipalities countywide, according to Palm Beach County Chief Deputy Property Appraiser Dorothy Jacks.
That’s an increase from $23.5 billion for 2014.
Jacks made the remarks during a March 22 presentation to the City Council.
“It’s got the highest market value of any city in the county, with the second-highest parcel count to West Palm Beach,” Jacks said, referring to Boca Raton’s 42,460 individually owned properties. The city’s taxable value for 2015 is $19.5 billion.
Market value, or what buyers will pay, is often higher than taxable value.
And there’s more good news: Residential values are expected to continue rising in 2016, increasing an estimated 6 to 8 percent, she said. Predictions for commercial values will come later in the year.
Nearby Highland Beach’s 2015 market value totaled a tidy $2.6 billion, with a taxable value of $2 billion for its 4,207 properties. Overall values there are expected to rise an estimated 9 to 12 percent in 2016.
At the end of 2014, market value  for Highland Beach was about $2.3 billion, according to the property appraiser’s office.
So why the uptick in Boca Raton?
“Thoughtful planning” is creating “interesting opportunities” for growth, Jacks said.
“What we have noticed about Boca Raton is that they have started this interesting development on the Congress Avenue corridor north of Glades Road near the mall,” Jacks said. “It is very pedestrian-friendly. A lot of sales activities have occurred around that area, and of course, everything around the university is booming.”
“Remarkable” is how Jacks described the city’s commercial zone development and she described the Congress Avenue corridor projects as a “very thoughtful way to move your city westward.”
“It seems Boca Raton often sets the trend in our county,” Jacks said. She noted that Delray Beach is also starting to redevelop its Congress Avenue corridor.
“Boca Raton is a big city in a lot of ways. It’s good to see Boca Raton raising values and then maintaining them,” Jacks said. “It just points to a well-run city. Boca Raton has always been a well-run city. They are always thinking about their future.”
Boca Raton Mayor Susan Haynie said the city has become an employment hub with a successful transportation network, a growing university and affordable housing that is being built close to retail and business.
“All facets of our community are world-class and that has been reflected in these property values,” Haynie said.
She added, “We are very fortunate that those who came before us understood the value of a very vibrant tax base and we also are fortunate our city manager is also a CPA.”
“It seems well thought out,” Jacks said of Boca’s growth. 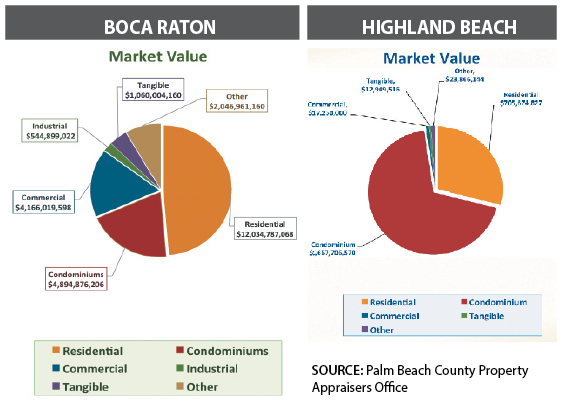