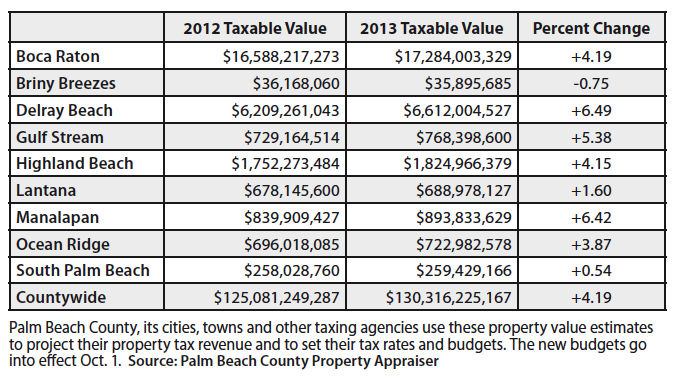 Budget managers in eight of nine South County coastal communities can exhale.
Taxable real estate values — the stuff property taxes are made of — continues to creep back toward pre-recession levels.
Taxable property values in eight towns increased this year and all at a greater rate than last year. Four of them matched or outpaced the Palm Beach County-wide uptick of 4.2 percent.
Only Briny Breezes — a town of fewer than 500 mobile homes — continued to lose value, dropping 0.75 percent, but even that was a smaller decline than last year.
“It’s getting a little better each year,” said Ocean Ridge Town Manager Ken Schenck, where values increased 3.87 percent. “It’s never going to get back to where it was, but maybe that’s a good thing.”
Manalapan and Delray Beach saw the largest increases, both topping 6.4 percent.
One upside of more property taxes to spend is that towns won’t be forced to dip into their reserves to balance the budget, as some have in recent years.
“We might have a chance to catch up on capital projects,” said Highland Beach Town Manager Kathleen Weiser, referring to renovating the Town Hall or replacing aging police cars, projects that had been put off because of the bad economy.
South Palm Beach is not expecting a windfall with its 0.54 percent increase.
“At least it’s better than being down 1 percent” as the town was last year, said Town Manager Rex Taylor.
Even the increased property values won’t make budgeting any easier.
“We don’t know what the Affordable Health Care Act will do to our health insurance rates (for employees). The quotes are all over the place,” Taylor said.
“And,” he added, “the retirement system rates are going up.”